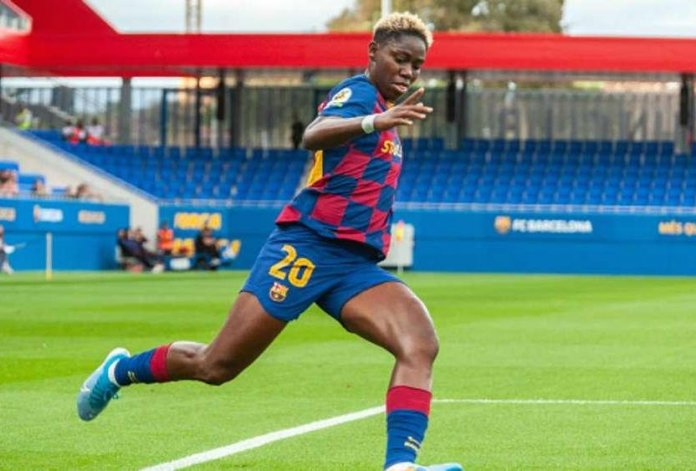 Super Falcons Captain, Asisat Oshoala and her Femeni Barçelona teammates will have a date with history tonight when they play their first ever match at the famous Camp Nou stadium, the home ground of the men’s team.

After the mandatory winter break, Barca Femeni will play their first league match of 2020/2021 season against Espanyol Ladies tonight at the stadium to commemorate the 50th anniversary of the first match played by the ladies.

Before now, Barca Femeni play all their home matches at the Estadio Johan Cruyff but will make a temporary relocation to the iconic Camp Nou to commemorate that first women’s Selecció Ciutat Barcelona -considered the ‘embryo’ of Barça’s women’s football setup- played there on December 25th, 1970.

According to information on Barcelona’s website, www.fcbarcelona, recalled how on Christmas day 1970, the Barça pioneers, under the name Selecció Ciutat Barcelona coached by legendary former goalkeeper, Antoni Ramallets, played a match against Unió Esportiva Centelles. That game was a prelude to the first team match against CSKA Sofía.

That match at the Camp Nou which ended in a goalless draw, took place in front of 60,000 fans. It became part of Barça Women’s history -even though at that time they could not wear the club colours or use the club name, as they were not officially part of it.

With the match against Espanyol at the Camp Nou tonight, Barça Femeni will once again be protagonists in a historic milestone.

The players will do so as a professional team, the result of the club’s 2015 commitment to promoting women’s football.

So far in the ongoing season, Oshoala has continued to make headlines with Barca Femeni after winning all their 10 matches with 30 maximum points in the bag as they hope to retain the league title.

Oshoala who scored a goal and made two assists in the last match was the hero again as Barcelona Femeni walloped RC Deportivo 6-1.

The Nigeria star who started the last match against Sevilla from the bench won her place back in the starting line-up and made it count with two goals.

She netted her first goal in the 26th minute before completing her brace in the 49th minute of the encounter.

The Barça ladies are expected to wear a patch on their shirts tonight to commemorate the milestone of 50 years ago.

Atiku Has What it Takes to Move Nigeria Out of Present...

Atiku Has What it Takes to Move Nigeria Out of Present...