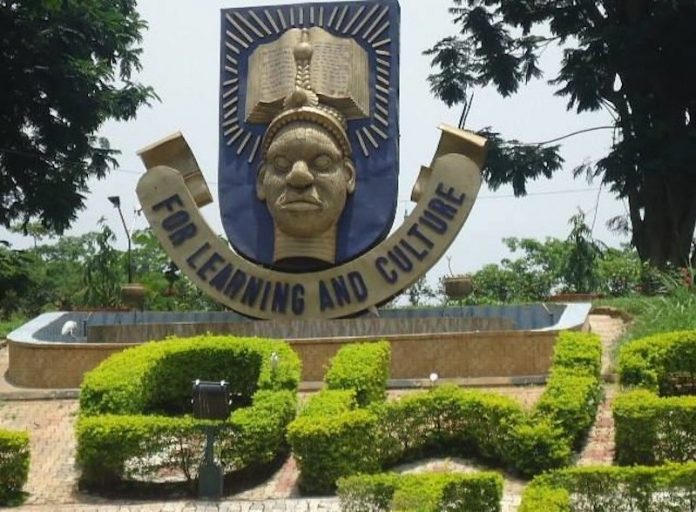 As crisis gripped Obafemi Awolowo University Ile-ife Community over alleged Illegal encroachment on OAU land by the Ife Community, the university management has accused Ife Community of erecting houses without due process.
The crisis has led to utterances that can cause mayhem in the acient Yoruba town.

Reacting to the ugly situation, the Vice-Chancellor of OAU, Professor Eyitope Ogunbodede said the federal government is fully prepared to secure the university’s land from the land grabbers.

Briefing journalists on the illegal encroachment on the university’s land, he said he has gotten marching order from the Minister of Education, Mallam Adamu Adamu to secure the university land.

He said government is not only prepared, but ready to secure all illegal structures taken over by land speculators and grabbers.
According to him, all the land was donated to the university in 1961 when it was founded by the government of the then Western Region of Nigeria, by the then Ooni of Ife, Adesoji Aderemi, with the support of the community.

The vice-chancellor noted that nobody has ever ventured or enchroached into university land until recently when some land grabbers audaciously insisted that “the land given to the university was too much.”

He said the current Ooni of Ife, Oba Adeyeye Enitan Ogunwusi had waded into the matter and promised to resolve the issue.
The vice-chancellor said it was clearly gazetted as university land on which the institution had exercised ownership for decades.

He therefore warned all the land grabbers to desisit from the act, saying that the university will start securing the land by fencing the entire area.
As OAU and Ife Community crisis rages on over disputed land, the Ife Development Board has challenged the university management to approach any court of competent jurisdiction if it is sure of its claim.

Addressing journalists recently, the President of the board, Jire Awowoyin, who spoke on the disputed portions of the land between the university and the Ife Community, contended that the land in question was outside the boundary of the university.

Awowoyin stressed that “the painful area of this issue is that most of the land they claimed has been sold, leased out by the management of the school, therefore Ife cannot keep silent and be looking like this.

“Ife is developing and the population is growing; we need more land, it’s not as if we have slept on our right, Ife is accommodating that is the issue and the action of Ife Communities on the problems being posted by Obafemi Awolowo University, how will you see somebody destroying property on your land and be looking.”

He added: “If they bring people to come and destroy our property we will also send people to them to send them away, we are calling on law enforcement agencies to warn OAU not to trespass into our land, go to the OAU management and ask for the document backing the land they are claiming.

“We are begging the federal government and the ministry of education to set up a high power investigation committee at the federal level to investigate the issue.

“The issue is maybe OAU has embarked on blackmail, propaganda to tighten Ife Communities and spoiled the accommodating nature of the community, let the whole world warn OAU not to go and destroy our property.”

He stressed that available data from Surveyor General’s office indicated that the total land area given was 13,852 acres, adding that the land is bounded by River Opa and Amuta Stream to the south and east as clearly marked on the plan survey.

He added that the newly built PPP hostels, Moremi High School, university junior staff quarters, were built on community land owned by various families of which some of whom have been relocated to other areas in anticipation of the grant.