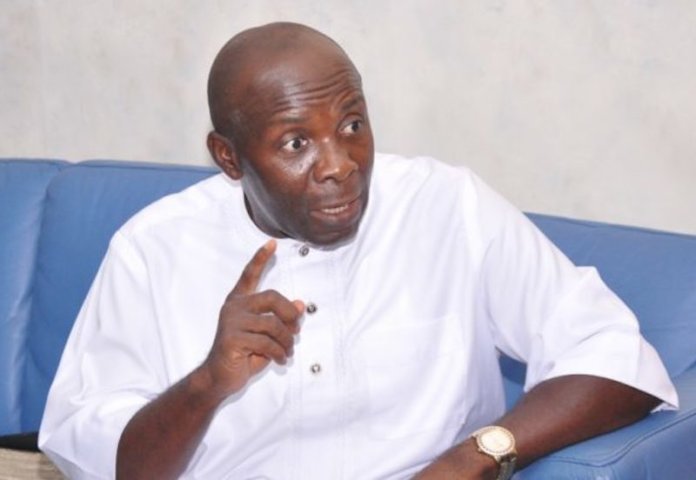 The All Progressives Congress (APC) has said it is laughable to say that Nigerians desire the return of the Peoples Democratic Party (PDP) to power after its 16 years misadventure.

The ruling party said it noted with concern the tales and ramblings issued by PDP, which to all discerning members of the public, is full of sounds and fury, signifying nothing.

The National Secretary of the

Caretaker/Extraordinary Convention Planning Committee, Senator John AkpanUdoedehe, in a statement issued yesterday said the party believed that Nigerians should be spared the trauma of a reminder of the disaster of PDP’s 16 years of misadventure in government.

He added that the PDP should allow Nigerians forgive it for the numerous transgressions and agony it had put Nigerians through many years of misrule which their National Chairman had rightly publicly apologised to Nigerians.

AkpanUdoedehe stated: “We would ordinarily have allowed PDP to wallow in its usual illusion – since its descent from power in 2015 – that Nigerians desire their return to power; how laughable!

“We are constrained to set the records straight because it borders on the collective sensibilities of Nigerians who have consistently and resoundingly proven in two consecutive cycles of general elections as well as other off-cycle elections, their outright rejection of the contraption called PDP and their (Nigerians) preference and endorsement of APC as the Party of choice for the majority of Nigerians.

“Moreso, if falsehood is allowed to fester, it may don the garb of truth. Where lies the moral authority of PDP to even contemplate comparing themselves to APC after its wasteful years in governance; but alas! Instead of burying its heads in shame, and allow sleeping dogs lie, its rantings keep reminding us of the ignominious era where: crude oil was sold at an average of $100 per barrel for a consecutive period of 4 years, which gave an excess of at least $30 per barrel above the budget benchmark and MTEF, and raking in surplus revenues – windfall, if you like – for the country; yet what did Nigeria and Nigerians have to show for that period. Nothing at all!.”

The party noted that going by the cankerworm of revelations after the descent of PDP, the Central Bank of Nigeria (CBN) vault was thrown open and virtually abandoning professionalism.

“Where individuals drove in to cart away raw cash as political patronages and without recourse to paperwork and inflationary consequences.”

The ruling party said the PDP has decided to play to the gallery in an attempt to play deniability and take away the gaze of Nigerians from the remarkable strides which the APC-led administration of President Muhammadu Buhari is carrying out amidst very trying circumstances.

It added that the Treasury Single Account (TSA) is in operation and has successfully curbed the excesses of government officials who may be prone to graft.

It noted that the federal government has successfully aligned the budget cycle with the January to December budget window to allow for better delivery of benefits to Nigerians.

It also said that the 326km Itakpe-Ajaokuta-Warri railway which has been abandoned for more than 30 years is in full operations with modern coaches, among other achievements of the present administration.