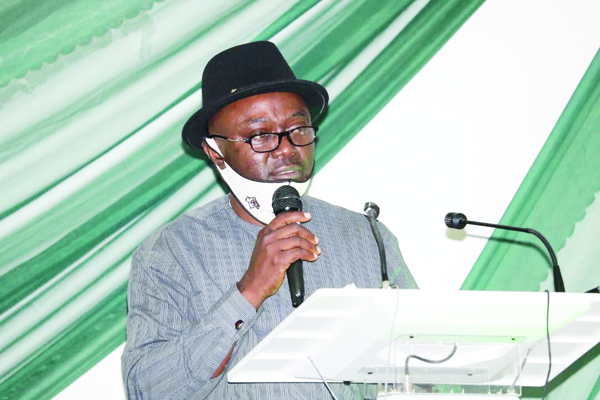 Not even the gloomy prognosis of this year seems capable of dampening the enthusiasm for a more self-sustaining art sector, as Professor Emmanuel Wesley Okachi’s paper in a National Gallery of Art’s recent stakeholders’ meeting in Abuja corroborates. Okechukwu Uwaezuoke reports

ART-ICLES
“Artists,” Professor Emmanuel Wesley Okachi reminded his audience, “have always been at the forefront of unusual thinking and perception of life. They are often personalities with innovative, creative and revolutionary ideas by projecting into the future. Fela Kuti in the entertainment industry, Chinua Achebe’s novel, Things Fall Apart and Leonardo da Vinci whose creative spirit led to a range of inventions, spanning from military hardware, architecture, aviation and medicine are all good examples of [the] creative genus that impacted their societies.”

An assertion like this – though needful as an admonition in an environment that celebrates philistinism – tends to trail off into the humdrum through being repeated too often. Yet, it was appropriately prefaced the Ahmadu Bello University, Zaria’s art lecturer keynote address, which was delivered at a stakeholders’ meeting held at the Radio House in Garki, Abuja, on Monday, December 21, last year. The address, titled “Imperatives of Making the National Gallery of Art Revenue-Generating”, mainly dredged up issues bordering on making the parastatal a self-sustaining entity.

The event, during which the COVID-19 protocols were strictly adhered to, was initially planned as a retreat before it was changed to a stakeholders’ meeting. As for the National Gallery of Art – more often abbreviated as NGA –, it was established in 1993 for the promotion and presentation of creative visual arts in Nigeria. This was in fulfilment of the recommendation of Nigeria’s cultural policy, which derived from the UNESCO document on the World Decade for Cultural Development (WDCD).
With its headquarters in Abuja and the main exhibition space at the National Theatre building in the Iganmu area of Lagos, the gallery currently maintains six branches in the country’s six geo-political zones.

Indeed, the fact that it has been mandated, as a parastatal of the Federal Ministry of Information, Culture and Tourism, to collect, preserve, document and present contemporary Nigerian artworks positions it as a potential global tourist destination and money-spinner. Yet, the poor funding of this repository for the country’s creative spirit has greatly limited its capacity to rise to the occasion.

Sure enough, there had been the award of grants to artist and art scholars by the gallery as well as the acquisition and collection of contemporary Nigerian artworks, holding of both permanent and temporary exhibitions, organising of competitions and talent hunts and the sponsorship and encouragement of research in the arts, among others. But, Professor Okachi cited the “dwindling cash inflow from the major source of the nation’s income”, which has adversely affected the nation’s capacity to “sufficiently fund its budget”, as “impacting negatively on the successful execution of assigned mandates of [the government] parastatals.”

Hence, his call to the agencies “to diversify their respective sources of funding”. In sketchy outlines, he outlined the objectives of his address as follows: understanding why the NGA should become revenue-generating; what should be done to realise the parastatal’s mission (interrogating its current Act as an example); establishing the impediments to making the gallery self-sustaining; investigating the roles of the critical stakeholders in overcoming the challenges; identifying the outlook of a new NGA and a revamped visual arts sub-sector; describing the relationship among the art agencies in the cultural sector as well as suggesting ways for the gallery can supplement its funding.

Premising his paper on what he called a “tripod stance presentation” (the what, the why and the how), he first identified insufficient funding, legislation, inadequate office complex, government policy, lack of synergy amongst stakeholders in the industry and wrong perception, among others as some of the challenges faced by the NGA. Then, he explained why a revenue-generating NGA would be desirable and, finally, made his recommendations on how resources could be mobilised.

Professor Okachi’s succinctly-itemised paper obviously left his audience with no doubt about his understanding of the challenges faced by the industry in the creativity-stifling environment. “One of the contending issues in visual arts and cultural administration in Nigeria has been the role in promoting the growth of the Nigerian economy,” he had argued, among other things. “The suspicion by the political class over the years has been that the creative industries (especially the visual arts) are only but a drain in the national purse as they lack the capacity to generate reasonable wealth for the nation. This has hence affected the will for favourable policies that will impact the industry positively.”

This should explain not only why the visual arts sector seems less-recognised than such creative disciplines as entertainment, music, fashion and film industries, but also the fact that the Central Bank of Nigeria and Bankers Committee left out the visual arts as a beneficiary of their initiative. “In the same vein, [the] Heritage Bank N5bn Creative Industry Fund Initiative equally excluded the visual arts even when the MD/ CEO described the creative industry as one leeway to solving the unemployment challenge,” he added.

In his projected vision of the potentials of a new NGA and a revamped visual arts sub-sector would be like, Professor Okachi painted an alluring picture. Besides the fact the parastatal being able to fund its such recurrent expenditures as staff allowances, he also cited a boost in efficiency and professionalisation of its services through the drastic reduction of bureaucratic bottlenecks, among others.

Hence, it helped that he did not leave his nebulous allusion to “resource mobilisation” to the audience’s conjectures. According to him, “[it] may be a management process that involves identifying people who share the same values as your organisation and taking steps to manage the relationship. It, therefore, refers to all activities involved in securing new and additional financial, human and material resources for an organisation which involves making use of and maximising existing resources to advance its mission.”

His postulations on the way forward for the NGA may sound like could have been dismissed as utopian had he not hinged them on the parastatal having “a strong yet flexible structure and accountable, transparent governance practices”, adding: “Its structure and good governance will allow it to respond to shifting priorities’ of its supporters and new responsibilities towards its clients/ donors while creating a positive climate for its staff.”

To a member of the audience, who might have been lost in the dense undergrowth of the nearly one-hour-long address, the lecturer’s address resolved into clarity and perked up with his following concluding statement: “By the members of the National Assembly Committee on Culture and Tourism enacting the requisite law, the Ministry of Information and Culture striving to change the societal perception about the art and its inherent potential and consciously taking the building of a befitting NGA Complex in Abuja as a first-line priority, supporting the need for the NGA to engage in resource mobilisation to supplement government funding and the collaboration and synergy of stakeholders in the industry will result to a Parastatal that will achieve its mandate, become viable and sustainable.”