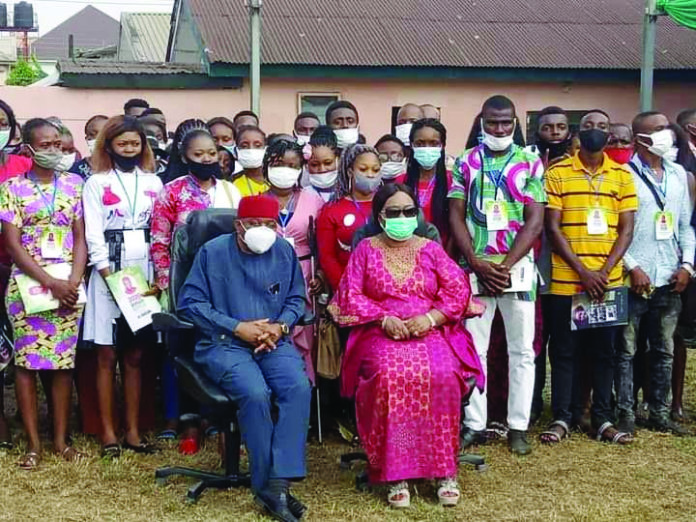 The Senator representing Abia Central at the National Assembly, Theodore Ahamefula Orji on December 23, 2020, presented scholarship of N100,000 each to 100 university undergraduates selected from different universities across the country. The presentation (fourth edition) of the Scholarship Scheme took place at the constituency office of the two-term Senator in Umuahia.

The annual scholarship award which was inaugurated during the 2015/2016 academic session, initially was intended to accommodate 60 indigent and intelligent undergraduate students from the six local government areas in the senatorial zone whose academic pursuits were endangered as a result of financial difficulties. But the scholarship scheme had since expanded to accommodate more students due to magnanimity of Senator Orji, who during his eventful eight years as governor of Abia State, revamped the educational system of the state.

The scholarships are awarded to students who are accepted to an accredited College/University and have completed one academic session in their chosen course of study. The successful candidates are based on character, leadership, potential for academic success, the importance of the scholarship to academic pursuit and financial need. There is a selection committee which consists of men and women of character drawn from six constituent local government areas of the senatorial zone who screened all applicants and they ensured the process was non-discriminatory. The committee members’ immediate family is not eligible to apply and not considered.

This years’ event, just like the past editions, was well attended by important personalities from all walks of life.
Speaking during the colourful event. Abia State Governor, Dr. Okezie Ikpeazu, who was represented by his deputy, Ude Oko Chukwu, commended Senator Orji for the scholarship scheme, which the state government has continued to support since its inception because of its benefits to Abia in particular and Nigeria in general.

Governor Ikpeazu as a revered scholar who understands the importance of education to the society, implored the recipients of the scholarship to maximise the opportunity given to them by making sure they take their education to greater heights.
Ikpeazu who despite his tight schedules as governor, makes out time to teach in the classroom, called on the beneficiaries “to be law abiding, studious and of good behaviour; as that is the only way to show appreciation to their benefactor.”
Orj who was accompanied by his wife, Mercy Odochi Orji (Osinulo), charged beneficiaries of the scholarship scheme to take their education seriously, adding that education is key to one’s success in life. He thanked the beneficiaries for keying into the scholarship, promising to do more in the future.

An elated Orji who is a product of quality education, in an interview with me disclosed what motivated him to give out scholarships: “Was that, I saw there were a lot of intelligent people in my constituency who couldn’t raise the funds to pursue their dreams. You have those whose parents cannot afford their school fees, those who are intelligent but have no money and those are intelligent also but are not being encouraged to read. I reasoned that the best thing to do for these youths was to give the university training because university education is important. Don’t worry about the jobs; the jobs will come eventually if you acquire the university education.

“Education does a lot of things, it disciplines you, it makes you a better citizen of the society. That is why I said let us do this to produce good citizens from my constituency who will eventually be good citizens for the whole of Nigeria, excel in life, be useful to themselves and be useful to society.

“If you look at those who got the scholarship, they are those who major in Engineering, Architecture, Medicine, Computer Science, Agriculture, etc., the manpower that is needed by Nigeria now. The turnout was unprecedented. Earlier, people were having doubts; but when eventually they saw the reality, they rushed in, but by then we had closed the application. Entry for the scholarship was advertised on the internet and some newspapers. People filled their forms and returned because we gave a deadline and at the expiration of the deadline we started the interview.

After the interview, out of the lot that applied, we chose the successful ones. I feel very happy about it.”
Former governor Orji who was nicknamed the ‘Legacy Governor’, achieved a lot of laurels in the educational sector. “I want people to be educated to be governors and all. And when I was governor, I did very well in terms of education.
You realised that in WASSCE, we maintained the second position for two consecutive years; we won trophies in educational competitions that we attended. We won a lot of laurels. We built and renovated a lot of schools just to maintain the tempo because education is vital.”

It was also during Orji’s tenure as governor that 19 mission schools which had been run by the state for 40 years were returned to their original owners, because he appreciates their effective moral stronghold in the building of the ideal citizen.
Truly, Senator Orji’s love for education is so deep that he will commit his time, energy and resources to ensure that Abia children at all levels acquire quality education.