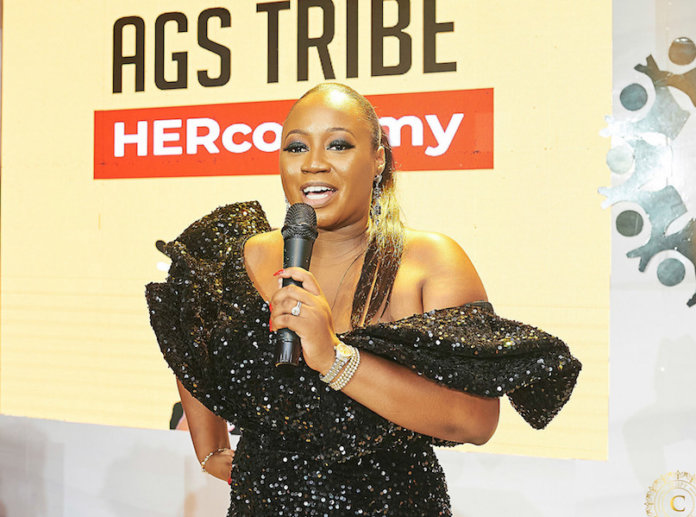 At the maiden edition of the #Herconomy Conference and the third edition of #AGSTribe Annual Challenge, history was made when a unique product proposition, #AGSTribeMobile – Africa’s first socio-economic empowerment mobile application for women – a one-stop resource hub for professionals and entrepreneurs in Africa, was unveiled to tackle the challenges of empowering women, scaling digital skills and accelerating inclusion, writes Mary Nnah

Over the years, there has been advocacy globally about achieving gender equality, promoting social inclusion and the practically empowering women in a largely patriarchal and male-dominated world.

In line with this, the Founder of the AGS Tribe and Entrepreneur, Ifedayo Durosinmi-Etti, has championed a support system for young women through a virtual community of female professionals and entrepreneurs. Through this community, Durosinmi-Etti, leads a growing movement of women who now easily access grants, training opportunities, mentoring and access to business leaders across various sectors of the economy.

After being inspired to write a book, “Accessing Grants for Startups”; she found a staggering dearth in resources for young people, especially women and decided to build a community of women who reached out at first with more questions about her book.

And with that, the vision kept growing; with a further need to provide support which inspired the AGS Enterprise Challenge. Yet again, in its third year; after Nigeria recently slipped into a recession and many are still affected by the pandemic and lockdown for many weeks; the AGS Tribe responded with a mobile app and a campaign tagged #HERconomy.

The #HERconomy Conference hosted leading experts and professionals who engaged on various issues that sought to address the gender gap in Nigeria whilst advocating for better inclusion and a women-led, post-pandemic economy.

Held at the Landmark Towers, Oniru, Lagos; the Governor of Lagos, Mr. Babajide Sanwo-Olu, lauded the efforts of the AGS Tribe in empowering women and expressed his commitment to support the initiatives of the community.

He hinted at the efforts of his administration to empower women in the state through a Four Billion Naira fund set to scale up over 200 women entrepreneurs and concluded his goodwill message by pledging to support 6 of the finalists in ways that will guarantee a big boost to their businesses.

The event’s special guest of honour, Mrs. Bamidele Abiodun, in her remarks, asserted that women contribute more to the economy than their male counterparts, especially in the agricultural sector. The Ogun State First Lady also emphasised on the need for training, exposure and access to funding for more women in Nigeria.

In his speech, Kehinde Durosinmi-Etti said the roles of women in the economy have always been pushed to the background. According to him, there is a need for deliberate policy to be set up to encourage women to step out of the background and take control at the helms of affairs. Other speakers who spoke at the event all lauded the achievements of women in alignment with the event theme and campaign, #HERconomy; calling for a more inclusive and women-led sectors in order to book GDP and improve Nigeria’s economic prospects in the future.

Manager, Jobs, World Bank Group, Ian Walker highlighted the importance of tackling youth unemployment in Africa. Expressing his worries on the issue of unemployment amongst youths, he said, “this present youthful generation of Africa is the most educated the continent has ever produced and we need to address the challenge”.

He however observed that the 2020 COVID-19 pandemic has made unemployment worse with more people getting laid off from their jobs.

In addition to the speeches and goodwill messages, the #HERconomy conference featured panel sessions on Women Empowerment with speakers from the United Nations Women Office (UN Women), Mastercard, FBN Quest, Flying Doctors and the Edo State Government. The panelists unanimously agreed that proper mentorship is needed to empower women to take up roles in entrepreneurship and thrive in them.

They called for women participation in Nigeria’s economy and also advocated support from men as gender balance will in no small measure help to achieve a female-empowered nation.

The conference activity line-up only got fired up after the panel sessions with further conversations about export. Identified by the conveners as a catalyst for vocational skills and window for scaling women-dominated industries, there was a fireside chat moderated by Olori Boye-Ajayi, Founder, The Katie Wang Company who hosted the NEXIM Bank Executive Director for Business Development, Hon Stella Okotete.

Although the Nigeria Export Promotion Council (NEPC) launched the SheTrades initiative targeted at Three Million women entrepreneurs by 2021 in Nigeria together with the International Trade Centre to unlock markets for women, little has been felt especially by women who run micro enterprises or informal businesses. Okotete asserted that “women are the biggest players in the nation’s non-oil sector but they are the least benefiting group.”

She affirmed that there is a need for an awakening amongst women to take charge of what rightfully belongs to them and the need for them to support each other in climbing the ladder of success. Okotete shared case studies of women who had taken advantage of the federal government’s policy reforms on exports and also counselled participants about how to get enlisted and registered with the bank for resource opportunities.

To round off the conference, the pitch session for the 2020 AGSTribe Enterprise Challenge featured 12 Finalists – female entrepreneurs selected from over 200 entries. The challenge is designed to support micro enterprises with grants and resource opportunities to scale their businesses. Judges who evaluated the entries and pitches included: Osayi Alile, CEO, ACT Foundation; Olumide Soyombo, Co-founder, Bluechip Technologies LTD and Ponmile Osibo, Partner, Platform Capital. After what was described by the judges as a rigorous and keenly contested session, Nneka Ogboi, CEO, Mash Baby Foods emerged winner and clinched a grand prize of N1.5million, while Ejiro Ogunmor, CEO, Anaborhi Nigeria came second with a prize of N1million.

The third position was tied as Adetoun Yusuf of Eve Signature and Stella Ndekile, CEO, Nuban Beauty, both went home with N500,000 (with donation support from Olumide Soyombo) to encourage the efforts of the women. One of the finalists, Mary Asanga, CEO, Kutama Enterprise, also went home with a special prize of a N250,000 grant presented by Mr. Ponmile Osibo on behalf of FP Capital.

Whilst most of the reforms by the current and past administrations are yet to fully take effect, it is expected that many more women will be empowered across the country through interventions and initiatives such as the AGSTribe. According to the 2020 PwC, Impact of Women on Nigeria’s Economy, Nigerian women account for 41 per cent ownership of micro-businesses in Nigeria with 23 million female entrepreneurs operating within this segment.

This places Nigeria among the highest entrepreneurship rates globally. Although the high-level participation of female entrepreneurs in the country is positive, it is however often driven mainly by necessity, which is the norm in emerging markets where there is insufficient formal employment.

In the formal sector and at the lower levels in formal employment, there is almost an even 50-50 split in the workplace between men and women. However, as both sexes climb up the corporate ladder, women begin to decline in representation on the senior leadership teams and at the board level.

This is why the #HERconomy conference and AGSTribe Mobile both provided unique platforms to support female entrepreneurs through digital inclusion whilst encouraging more women to actively participate in the nation’s economy.