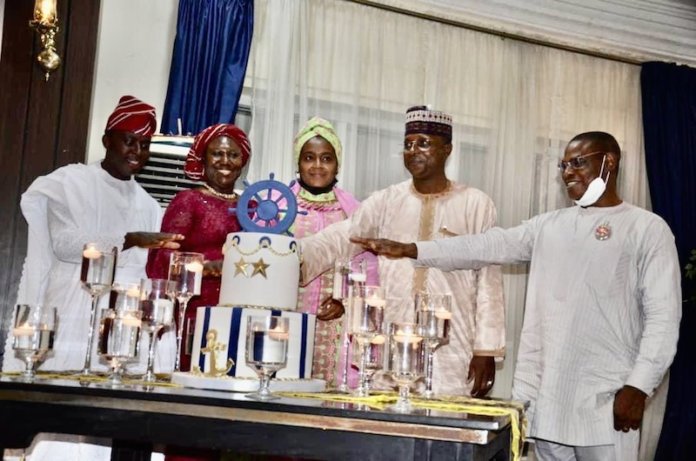 Across the three arms of the Armed Forces, it was recently promotion galore for deserving officers who have overtime proven their mettle and dedication to duty.

One of the newly promoted officers of the Nigerian Navy (NN) is the Commander, Nigerian Navy Ship BEECROFT (NNS BEECROFT), Rear Admiral Ibrahim Shettima, who was a Commodore before his present promotion.

Shettima was one of the 18 officers who were promoted to Rear Admirals from the rank of Commodores.

To celebrate the enviable promotion to the rank of a two-star general, the base recently feted him and family, as well as friends at the Western Naval Command Officer’s Mess in Apapa, Lagos.

Like many who spoke to THISDAY at the dinner opined, promotion is a morale booster in the civilian fold and for the military, it is not any different.

According to them, it is often done to enhance productivity by recognising hardwork, commitment and diligence and the result is that it motivates and inspires others to work harder.

In the military, such promotions, especially to such an enviable position is usually a painstaking procedure that involves thorough selection.

At the dinner, guests and well wishers were treated to fine wine and tasty cuisine while they commended the commander for dedication to duty, especially in such an operational base.

Earlier, when the newly promoted were decorated by the Chief of Naval Staff (CNS), Vice Admiral Ibok Ete Ibas, he noted that promotion was inherent in any organisation, and it came with more responsibilities.

The CNS urged them to re-dedicate themselves in the discharge of their duties, adding that the significance of the occasion was drawn from the critical need for courageous and dynamic leadership in the armed forces, as expected in every performance oriented organisation.