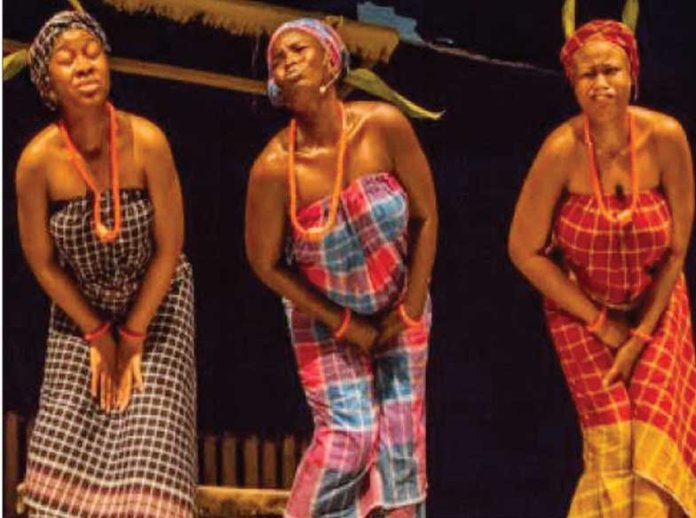 A resurgence of activities despite the government-imposed lockdowns – caused by the COVID-19 pandemic scare – and the nationwide anti-police brutality protests that followed it, hinted at a vibrant cultural sector. Okechukwu Uwaezuoke writes

END-OF-YEAR REVIEW
Cold and dreary, that Tuesday, April 21 morning loomed over Manhattan like a shroud. An eerie silence reigned in the almost-deserted streets of this normally densely-populated borough of New York City. For besides the cars parked on the streets and flashing lights of the neighbourhood shops’ windows, the only signs of human presence were the gaggle of homeless people trudging on along the streets and lugging along their luggage. There were also a few camera-wielding gawkers, who were intent on documenting this uncanny scenario for posterity. Could it be that Mother Nature was going cold turkey on the ruinous human activities?

To Nigerian artist Tony Nsofor, who calmly observed the confounding turn of events from the safety of a neighbourhood flat, this COVID-19 pandemic could not have been raging at a more inopportune time. On his fourth visit to the Big Apple, he was just in time for the city’s art season, which he was hoping to leverage as an Open Sesame into the vibrant local art community. But then, the pandemic – as the ultimate party-pooper – forced the city, like the rest of the world, into lockdown.

Across the Atlantic Ocean and 6,597 kilometres away from Nsofor, another Nigerian artist Bob-Nosa Uwagboe was waiting out the lockdown somewhere in Gdansk, a port city on the Baltic coast of Poland. A guest of the Gdansk National Museum, he had arrived the city on Friday, March 13, a day before the planned opening date of his solo exhibition, titled Transit. In a touch of irony, the exhibition’s title became an allusion to his predicament.

In the German city of Cologne, the Nigerian-born artist Chidi Kwubiri was counting his lucky stars, having barely escaped being trapped in Nigeria during the lockdown. His fellow Germany-based Nigerian artist Jimmy Nwanne was not as lucky. For he was forced to spend the whole period of the lockdown in Lagos, away from his family in the German city of Kaiserlautern.

And to think that this was one promising year that glimmered with promises for the cultural sector just before the lockdown! Among the landmark events was the official launch of the Society for Art Collection, also known by its acronym Sartcol, at The Wheatbaker Hotel, Lagos on Monday, February 17, which had the Edo State Governor Godwin Obaseki in attendance. Then, the annual Life in My City Art Festival was finalising plans to hold the first Nigerian off-exhibition at the Dakar Art Biennale – better known as Dak’Art– since 2008, when the National Gallery of Art, then led by Joe Musa, hosted the Naija exhibition.

But then, the obtrusion of the COVID-19 pandemic forced the cancellation the Dak’Art Biennale alongside a slew of other international events, including the Venice Architecture Biennale, which had planned to feature the frontline Nigerian female artist Peju Alatishe this year. Another leading Nigerian female artist Temitayo Ogunbiyi remotely-executed a playground project in the southern Italian city of Naples from her base in Lagos.

Meanwhile, the kaleidoscope of emotions in the local arts scene shifted from despair to acceptance and eventually to resilience. Taking a cue from the international scene, hitherto noteworthy cultural events were either cancelled, postponed or – in the case of the more resilient ones – moved to the virtual platforms. First, a Lagos-based female art activist Blessing Azubike co-ordinated an online 14-day challenge (from March 30 to April 12) on the platform of her art collective The Artist Ladder. Tagged “The Artist Ladder 14-Day Art Diary”, the endeavour which was curated by Ms Azubike, kept a group of young artists busy during the lockdown. Each day of the lockdown saw the participants produce an artwork, which was then shared on the social media through the hashtag #TheArtistLadder14DayArtDiary. Then, cardinal art events like the LagosPhoto, ArtX Lagos and the Arthouse Contemporary Limited auctions, to mention but a few, moved to online platforms.

And talking about auctions, the British auction house Christie’s, on Monday, June 29 in its Paris salesroom, proceeded with a controversial online sale of a couple of sacred Igbo art objects (called “Alusi” figures), which were believed to have been stolen. This was despite protests led by the Nigerian-born Princeton University art professor Chika Okeke-Agulu. The artworks, which were eventually sold for 212,500 euros to a buyer on the internet for less than its pre-sale estimated price between 250,000 and 350,000 euros, were part of the private collection of Jacques Kerchache, an aide to the former French president Jacques Chirac.

Back to the Nigerian scene, the Segun Runsewe-led National Council for Arts and Culture (NCAC) pioneered the country’s first-ever drive-in theatre experience in Abuja, during which all the post-COVID-19 “new normal” protocols were strictly adhered to. The government agency also regularly engaged culture and tourism stakeholders in ZOOM meetings held on Saturdays. Following in the NCAC’s footsteps, another government agency National Gallery of Art (NGA) announced a series of programmes, which were tailored to suit the new realities. Then, a private theatre company Bolanle Austen-Peters Productions premiered its Broadway-style musical, based on the lives of the wives of the late Afrobeat legend Fela Anikulapo-Kuti, on YouTube, on Monday, September 7 in a first-of-its-kind collaboration with South African State Theatre.

Still on theatre productions, the Lagos Fringe took the bull by the horns with its exhilarating line-up of events – consisting of performances, exhibitions and training opportunities, among other things – at the Freedom Park, Lagos from Tuesday, November 17 to Sunday, November 22.

Flip over to the book sector. Not even the non-award of this year’s edition of the prestigious NLNG-endowed Nigeria Literature Prize was enough to douse the flame of enthusiasm among the literati. First, the prize’s organisers collaborated with the Committee for Relevant Arts (CORA) to organise a “book party” featuring past winners. Then, the Lagos Book and Arts Festival (LABAF) – also organised by CORA – honoured the poet and activist, Odia Ofeimun, who turned 70 on Monday, March 16 this year, in an edition that featured both virtual and physical events held at the Freedom Park, Lagos. The festival, whose theme this year was “A State of Flux: Literacy in a Period of Languor”, held from Tuesday, November 10 to Sunday, November 15 and featured exhibitions, workshops, drama, poetry, dance, films and conversations around the arts.

Meanwhile, the Association of Nigerian Authors (ANA), Prize remained steadfast in its tradition by announcing the winners of its 2020 Literary Prizes at the 39th international convention held in Ilorin, Kwara State, from Thursday, December 3, until Sunday, December 6.

Nonetheless, the ultimate headline-grabber in the literary sector was the formal launch of the Nobel laureate Professor Wole Soyinka’s latest novel, Chronicles of the Happiest People on Earth, at the Terra Kulture on Monday, December 7. The novel, published by the Ibadan-based Bookcraft Publishing Limited, was coming 48 years after his two works after his second novel, Season of Anomy, was published in 1973. His first, The Interpreters, was published in 1965.
Another landmark book event was the formal launch of Nike Davies-Okundaye’s biography, Bata Mi A Dun Ko Ko Ka, at the Choice International Building in Victoria Island, Lagos. The event, which also had Professor Soyinka in attendance, was held on Sunday, December 19.

Meanwhile, on the classical music front, the MUSON Centre in Onikan, Lagos maintained an online presence through a smattering of concerts on YouTube channel. This was besides the token online appearances of a handful of its star performers, as the year lurched from the pandemic restrictions to the anti-police brutality – a. k. a. #EndSARS – protests.

On a sombre note, this year’s harvest of deaths expectedly left a trail of broken hearts in the industry. First, the grand old man of highlife music Victor Abimbola Olaiya departed this life on Wednesday, February 12. Less than two months later, the legendary Paris-based Nigerian drummer Tony Allen died in a Paris hospital on Thursday, April 30. On Monday, June 1, Nigeria’s iconic reggae singer Majek Fashek, who was battling oesophageal cancer, finally gave up the ghost in New York. Back in Nigeria, the popular African-American radio personality Daniel Leon Foster, known in the entertainment circles as “The Big Dawg”, swelled the number of the departed.

On Thursday, July 30, a pall of gloom descended on the visual arts sub-sector with the passage of the renowned Lagos-based artist Nsikak Essien. A little more than three months later, the art community received with shock the news of the death of the retired University of Nigeria, Nsukka professor of art history Ola Oloidi on Monday, November 2.

Finally, in the book sector, the summon to the beyond of John Pepper-Clark on Tuesday, October 13 at 85 meant that Professor Soyinka became the only surviving member of the original contemporary Nigerian literature’s “pioneer quartet”. The earthly remains of the revered poet were buried two days later – on Thursday, October 15 – in his country home in Kiagbodo. Then, on Tuesday, December 22, the news of the passage of a former ANA national president and a former education minister, Professor Jerry Agada broke to a literary scene that was eagerly awaiting the end of a difficult year.