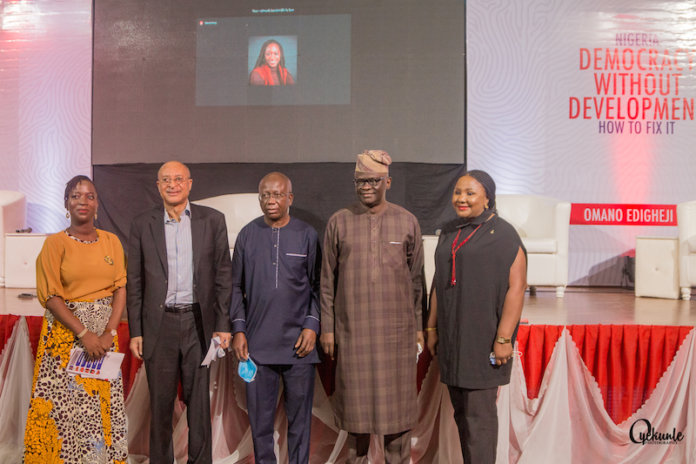 The transition to a democratic system of governance in Nigeria has been characterised by a lack of development; sadly, 21 years down the line and not much has changed.

The #EndSars protests and its effects bear credence to the stunted development of the nation since democracy.

Much more than the dehumanising treatment of youths by the now-defunct unit, the protests were spurred by the pent-up anger over the maladministration, injustice, high fuel and energy prices, hunger, and dehumanising policies of the government.

This and many other crucial issues were discussed at the launch of the book “Nigeria: Democracy without Development. How to fix it”, written by Dr. Omano Edigheji.

In his address, the chairman of the event, Dr. Kayode Fayemi, who was represented by Senator Olubunmi Adetunmbi; Ekiti North Senatorial District, asserted that only development can drive democracy.

He decried the obvious lack of development, consensus, as well the biting poverty has made it difficult to mention democracy in the same breath with development in this part of the world.

According to him, democracy can only be sustained when people are happy and can foresee a future for themselves and their children.

He, therefore, urged the federal government to invest more in solving the nation’s developmental deficits for democracy to flourish.

“Without development, it is difficult to sustain democracy because democracy presupposes that people are interested in enforcing freedom and participation in governance through the contribution of representation. But how do you do this while the majority of the people are not even able to put food on their table?”

One of the panellists, Prof. Pat Utomi, asserted that public policy is not what one pronounces or constructs; it is what people consider as necessary to change their lives for the better.

He stated those who run political parties run them like private companies, making it difficult for any political evolution.

In response to claims by Pat Utomi that political parties do not exist in Nigeria, Senator Adebumi Olutunbi stated that the existence of a thing cannot be denied simply because it doesn’t exist in the form one expects.

However, Senator Uba Sabi argued that it hasn’t solely been a tale of doom and gloom for the nation. According to him, Nigeria has made considerable progress despite the myriad of challenges she still confronts.

“This is too sweeping. It is also incorrect. In all indices of development, we have made progress but huge challenges remain. There have been missed opportunities. Transparency and accountability is a major challenge.

“I agree with the author that the inability of leaders to meet the expectations of the governed has created a wide gulf between the citizens and governments at all levels. A large segment of the population has disengaged from the electoral process. The situation is worrisome but it can be fixed,” Sani said while speaking at the event.

Rounding off the event, Emilia Asim-Ita, Founder/Practice Director, A’Lime Media Limited, publishers of the book, thanked participants for gracing the event with their presence.