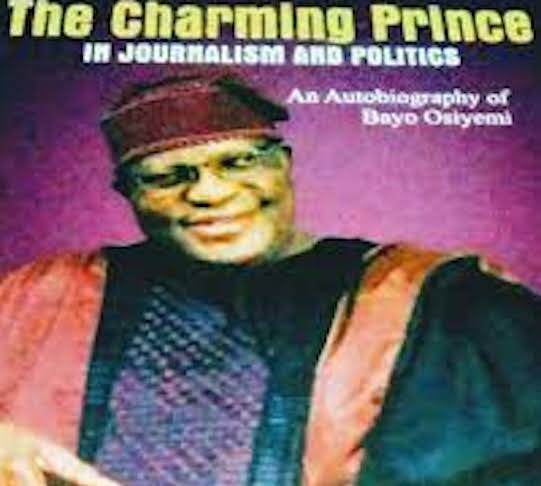 Many things make this book a compelling read, chief among which is the author’s life’s story covering his forays into journalism, politics and business.

The book under review, Otunba Bayo Osiyemi’s autobiography, The Charming Prince (in Journalism and Politics) is a moving story of Nigeria’s eventful Second Republic and the Army – led polity that truncated it. This story covers the 70 – year life of the Otunba himself and the reproduction of his weekly column in the Nation newspaper between July 22, 2017 and November 2, 2019.

Thus, the author presents his own life story in the first half of the 530 – page book, and the compilation of his columns in the second. This arrangement gives us a balanced view of his life and work as a journalist, politician, business man, church man and Yoruba chieftain.

The fascinating thing about this book is the author’s narrative of the landmark events of the Second Republic and authoritative details of the roles of the dramatis personae of the civilian government like Chief Obafemi Awolowo, Dr. Nnamdi, Lateef Jakande, Gen. Ibrahim Babangida, Chief Olusegun Obasanjo, Asiwaju Bola Tinubu, President Mohammadu Buhari and Alhaji Atiku Abubakar, etc.

However, let’s begin the review from the beginning. Veteran Journalist, Mr. Felix Adenaike wrote the foreword to this book, which tells us something about the author’s standing in the media. In the first six chapters, the author tells the story of his origins: his birthplace, childhood days, education, and parentage, which shows he’s blue – blooded.

We didn’t get to know much about his royal heritage in his early journalism years until much later when he began to be addressed as Prince Bayo Osiyemi. Born on February 4, 1950, to the families of Sisu and Arowosugbo of Ijebu Igbo, the largest town in Ogun State, he took his blue blood from his mother’s lineage; the Arowosugbo dynasty. In four short chapters, we read about his early years and his education. The narrative is gripping! It contains general twists and turns, anecdotes and escapades you’d expect from a man who grew up in sub – urban centers.

A true child of destiny, Otunba was actually born into a Muslim family and was named Abdul – Lateef. His traditional name, Omopeninu (child stayed long in the womb), speaks of delayed pregnancy which reportedly lasted three years, four months!

As Otunba reveals, the trajectory of his faith changed when he went to live with his maternal grandmother who was a Christian. This set the stage for his ultimate full conversion to Christianity as a committed member of the Christ Apostolic Church (CAC). This is very important because his worldview and actions are shaped by his religious philosophy as a child of God.

The hand of God is seen in his appointment as The Press Secretary to the first civilian Governor of Lagos State, Alh. Lateef Jakande, in 1979. This was the great leap into the public sphere that defined the destiny of Otunba Osiyemi and opened the doors of his upward mobility in politics and business. If his name resonates with us today, it is because of his step into the corridors of power at the young age of 29, and the part he played in the governments of Nigeria.

Otunba’s autobiography is worth reading because, of his 70 long years on earth, he has spent 41 and still counting in the thick of the nation’s politics, if we add his years in journalism, the prince would have spent half a century or thereabout in public focus, which clearly makes him a senior statesman.

Unfortunately, his first public service career was terminated after a little over four years, when the military toppled the Shehu Shagari government in December 1983. The story of that coup and its aftermath is the core of this book, and that makes it a must – read for those who are interested in the evolution our great country.

The passages dealing with the coup, and the military regime of Gen. Ibrahim Babangida, his annulment of the June 12 election, and Gen. Sani Abacha’s regime read like a thriller. We cannot thank the author enough for giving us an eye witness account of episodes that have shaped the nation’s polity. If not for this book, we would not have known the truth about the approval given by the acclaimed winner of the June 12 presidential election, Chief M.K.O. Abiola to Yoruba leaders like Alh. Jakande to participate in the Abacha regime. Abiola, according to the author, urged him to appeal to Jakande, his former boss, to accept the ministerial appointment Abacha offered him, when the ex – Lagos governor wasn’t forth coming. The author gave us detailed analysis of the June 12 annulment, the officers behind it, etc.

However, it was the callous treatment meted out by the Buhari – Idiagbon regime to LKJ, despite his reputation as the best performing governor of the Second Republic without army blemish to his reputation, that irked the author the most. The Otunba worked hard to get the Babangida regime to release Jakande, though his moves were a concerted effort with Chief Obafemi Awolowo himself, playing a major role behind.

Throughout the travails of LKJ in detention, Otunba demonstrated unwavering loyalty. Worthy of note was his rejection of an offer by Jakande’s successor, Group Captain Gbolahan Mudashiru, who wanted Osiyemi to continue his job as the press secretary, in his government. But Osiyemi rejected the offer out of hand.

Perhaps, LKJ knew his ward’s disposition toward him, even in those dark days of his political career. Whilst in detention, Jakande charged Osiyemi with the task of running John West Publication, the ex – governors publishing outfit. The Otunba and another colleague helped midwife a daily afternoon, newspaper, Lagos News, and a Sunday paper on the stable of John West.

This was the second career landmark of Osiyemi after his appointment as press secretary, and he ran the paper proficiently and profitably, thanks to his connection in high places in government. This project became a fall back for LKJ, a veteran journalist himself when he eventually returned from detention.

One of the important life achievements of Otunba was his two – year tenure as the Chairman of Muslim local government. All the intrigues, political skirmishes and his achievements as the chairman of that strategic local government council are well documented and it’s worth reading because the administrative acumen he displayed is still an unbeaten record. That experience now serves him well as a Special Adviser to Lagos State the Gov. Babajide Sanwo – Olu on Chieftaincy Affairs.

It would be remiss not to mention the collection of articles reprinted from his weekly column in the Nation newspapers, which forms the second part of this book. Frank, brilliant and written in a breezy, lucid style, these articles addressed several topical issues of the day.

The author’s penchant for using Yoruba proverbs and idioms from the hit songs of popular Yoruba social musicians, Haruna Ishola, Ebenezer Obey, Sikiru Ayinde Berrister, King Sunny Ade, etc., adds much spice to his writings. This points to his sentimental attachment to his Yoruba heritage.

From his narrative, we see that prince, a true child of destiny, owes his success in life to divine favour. He has to, because for God’s loving kindness, how could he have been born safely after nearly 40 months in the womb? His survival of two accidents abroad; one of which took the life of his beloved first wife, Esther, and miraculous escape from two assassination attempts, which sent him on a seven – year self – exile in London, are reasons for him to glorify God.

The interesting story of his sojourn in London, where he worked as a Realtor and the friendships he struck with ex – Inspector – General of Police, Sir. Mike Okiro, Globacom Chairman, Dr. Mike Adenuga, ex – Lagos State Military Governors, Mike Akhigbe and Brig – Gen. Oyinlola are all well documented in this book, as they helped stabilize him at trying times.