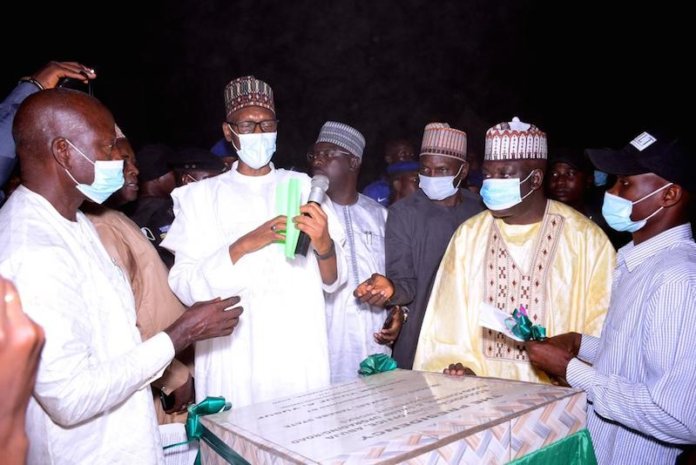 The projects are among the 18 ecological intervention projects awarded by President Muhammadu Buhari with the aim of controlling the menace of flood and erosion.

The projects, which were carried out by the Ecological Fund Office, and awarded to TILT Construction Limited, seeks to address the incessant ecological problems facing the people of Wukari in Taraba State in order to improve their wellbeing and resuscitate economic activities in the communities.

The senator representing Taraba Central Senatorial District, Senator Yusuf Abubakar Yusuf, who represented President Buhari at the commissioning ceremony, reiterated the Buhari-led administration’s commitment to tackling ecological challenges and stressed that the intervention project of such will bring a huge relief to the affected communities.

“The age long problem of flooding and erosion in this part of the country cannot be overemphasized. I have no doubt in my mind that this federal government intervention will bring a huge relief to this community which have for a very long time been stressed by these ecological challenges,” he said.

Yusuf further noted that the approval of the project to TILT Construction Limited is an attestation to President Buhari administration’s promise that no part of the country would be neglected due to its geographical location or political affiliation.

The Permanent Secretary, Ecological Fund Office, Hajia Habiba Lawal, who was represented by Edward Garba Matthew, attributed the timely completion of the project to the commitment of the federal government and support of the benefiting community.

On his part, the Managing Director of TILT Construction Company, Mr. Jameel Olatunji, while addressing pressmen at the commissioning, said the completion of the project within the stipulated period underscored the company’s dedication to delivering quality and standard project that stands the test of time.

“We believe this project is part of federal government’s efforts in tackling problems of its citizens and making life more meaningful for the people of our great nation. TILT Construction Company shares same sentiment and we are equally proud to say that the upgrading/road improvement project will be a reference point in terms of quality and standard.

“We are proud of this partnership and we look forward to more partnership with the federal government in delivering high standard projects as currently done in all the six geo-political zones of the country,” Olatunji said.