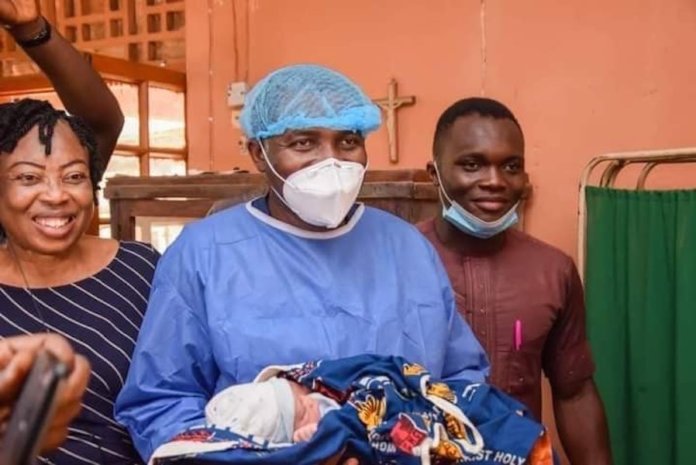 David-Chyddy Eleke writes that Hon Chris Azubogu, a member of the House of Representatives, has through his annual medical outreach given the people of Anambra State a gift of healthcare

Hon Chris Azubogu medical outreach programme is an annual event conducted by the lawmaker in partnership with a Non-governmental Organisation; Doctors on the Move and selected hospitals in Anambra South Senatorial Zone of the state. In the arrangement, Azubogu provides the finances, Doctors on the Move, comprising over 80 medical doctors in different field of medicine provide their expertise, while the selected hospitals provide their facilities for immediate and aftercare use for patients, during the outreach programme.

The programme which started in 2017 is in its fourth year and usually coincides in the month of December, which is a yuletide month. This has led Anambra people into dubbing the programme – Azubogu’s Christmas gift of health care to the people. Though it started as a programme for the people of his constituency; Nnewi North, Nnewi South and Ekwusigo Federal Constituency, but recently, the lawmaker has made it an Anambra affair and this year’s programme, patients came from Imo, Enugu, Abia, almost making it a South-east affair.

There have also been great testimonies from the programme as most indigent people have taken advantage of the opportunity to receive medication for ailment they have found very difficult to deal with because of lean resources. One of the beneficiary of the outreach, Mrs Ifeoma Okwesilieze who had a fibroid surgery, in an interview with THISDAY said she had been living with the abdominal growth for long because of lack of funds. “I was charged N900,000 for the surgery in a hospital, but because I didn’t have money, I could not do it. Someone asked us to come here and we did, and thank God the surgery was successful. I am feeling better now. I thank Hon Azubogu for what he is doing for us.”

Another beneficiary, an old man from Nimo, Njikoka LGA of Anambra State whose name was not immediately ascertained after successful surgery said, “I don’t know what to say about what God used Azubogu to do for me and my family with this free surgery today. The most surprising was the case of Mr Kenneth Emordi of Umunnamehi, Ihiala in Ihiala LGA who stated that for 10 years, he had not been able to see. His surgery was performed on 1st December at Diocesan Hospital Akwudo,Nnewi. A day after the surgery when THISDAY visited, Emordi to the excitement of all announce that he has regained his sight.

He said, “I thank Azubogu, may God bless him for what he is doing. May God lift him up. Thousands of people are here and he is not collecting money from people to offer these services. Look at me, I have regain my sight.”

Mr Emordi’s emotions were not far from those of another beneficiary, an old woman whose name was not immediately ascertained. The woman who regained her sight after a surgery in 2019 during the programme had brought banana bunch to thank the lawmaker. She told journalists that her biggest worry was that she has never seen her grandchildren because of blindness, but after surgery on her eyes, she could see her grandchildren and had since 2019 had a perfect sight.

A medical doctors in the team who spoke to THISDAY said, “This is one of the biggest medical outreach we have had. It is structured in such a way that people from every ward in the entire state are part of this outreach. At least three people from all the political wards in Anambra are here. We are even entertaining people from other states.

“It is so orderly, that is why you are not seeing people fighting because depending on your problem, you have been booked with numbers, and each person with an ailment knows the centre where that ailment is taken care of. We also have buses here that take people from one centre to another. Depending on what your health issues are, buses move people to the centre where their ailments are attended to. The lawmaker has through this programme inadvertently made this place a health tourist centre for Anambra people.”

Azubogu who spoke to journalists on the programme said, “The programme keeps getting bigger every years. We have also expanded the programme to accommodate the entire state, and more people are coming in from other South-eastern states. We are not discriminating against anybody. I am a lawmaker, and through my job I have attracted and also built many roads in this area. Will I saw because the road is for the people of my constituency, other people should not drive on it? You cannot. It is the same with a programme like this one, we are letting everyone enjoy it.”

On what motivated his resolve to begin the programme, the lawmaker said most poor members of the society can afford to eke out a living for themselves if they are healthy, but cannot take care of some critical health challenges they are currently plagued with, and would need help from affluent members of society, instead of foodstuffs.

He said, “I am motivated to start this medical mission because each time I get request from members of my constituency for help, it is not for them to feed, but for payment of hospital bills and treatment of one ailment or the other.

I have resolved that their health is more important because if they are healthy, they can engage in commercial activities that can put food on their table. I know that if they are healthy, they can go about their businesses and feed themselves, but for some ailments they cannot pay the bills, hence the need for us to help them,” the lawmaker said.

He added, “I cannot entirely claim glory for what is happening here. We have a team of doctors from and NGO, Doctors on the Move, and we engaged him to intervene in the health of our people. I partner with lots of people to get support for this programme, and it is not for me to take credit alone.

“This is the fourth edition and we improve every year. We don’t cover orthopedic and cardiovascular treatments here, but we do every other thing. It is open and free to all. You cannot regulate the people who come. It is service until God. A lot of people are not accessing medical care because of poverty, so this is what governance is all about.

“Others are giving indomie (noodles), but I feel I should intervene in this area. It does not end here, we are also going to use the data we generate from our medical outreach to shape policy framework on Healthcare service delivery through, organisation of people, institutions, and resources to deliver health care services to meet the health needs of a target population.”

“It’s no longer telling you about what we intend to do, rather it is all about what we are doing as you must have physically observed from all the four centres in Nnewi, Ozubulu, Amichi and Ukpor. My promise to my people during my first campaign to represent them at the Green Chamber is that I would make a difference. The difference I had in mind was identifying their needs and tackling the issue of providing them, with all the sincerity of purpose the best of my ability would muster.

“Hence, I built a team that has been committed to the cause of the people and even when our wants as a people are bogus, the interest was narrowed to our needs. Such basic needs gave rise to our first Free Medical Outreach in 2017. It was conceived out of the experience witnessed from some that made genuine complaints of crippling medical challenges while many more died in silence because of varying degrees of health problems. That first edition my team wholly undertook in 2017 opened our eyes to the real and enormous challenges facing my dear constituents.

“This prompted our decision to widen the scope, hence writing to and convincing the Federal Ministry of Health of the people’s basic medical needs in my constituency and consequently getting their consent of dedicated partnership. After the second edition that took place in January 2019, our statistical figure of our overall efforts stood at 7,750 patients attended to from within and outside the constituency. This number comprised of 3,850 adult women, 2,780 adult males and 1,140 children.-There were 134 successful general surgeries for uterine fibroids, ovarian cysts, lumps, scrotal elephantiasis, hernia. There were also 204 eye surgeries, 776 patients were treated with various forms of eye problems, 406 issued with medicated glasses, 706 lab investigations were conducted and over 250 ultra scans performed.

“The subsequent third edition in December, 2019 saw an encouraging improvement from the first two editions. With 7, 723 patients attended to, out of which 430 had surgeries comprising of 268 eye surgeries and 215 other surgeries 4, 810 medicated glasses issued 3,525 lab diagnosis conducted and 434 scans performed. It became clear to us that we’re making desired progress. Besides, the testimonies from beneficiaries, seeing people express degrees of joy of having been relieved of crippling health challenges added immensely to the motivation to do more.

“Hence the plan for this fourth edition to clearly go beyond the borders of my constituency and touch all corners of the state and even beyond. Lives are lives and should be saved whatever region, tribe or religion. This fourth edition took off on November 30 to last through to December 8. As many as over 9,000 patients have been attended to within the first three days. We have involved the best and very experienced hands in the medical business. The poverty level in our dear country is a huge cause for concern.

“People can hardly afford adequate daily meals, let alone helplessly manage sicknesses that force them to early graves. Some of these surgeries cost over a million naira to undergo in other capable health institutions. You can imagine the difficulties most people will face raising this sums to stay alive. No leader, and I mean responsible leader, should ignore these needs and concentrate on other material giveaways to the people. Health, they say, is wealth,” the lawmaker said.