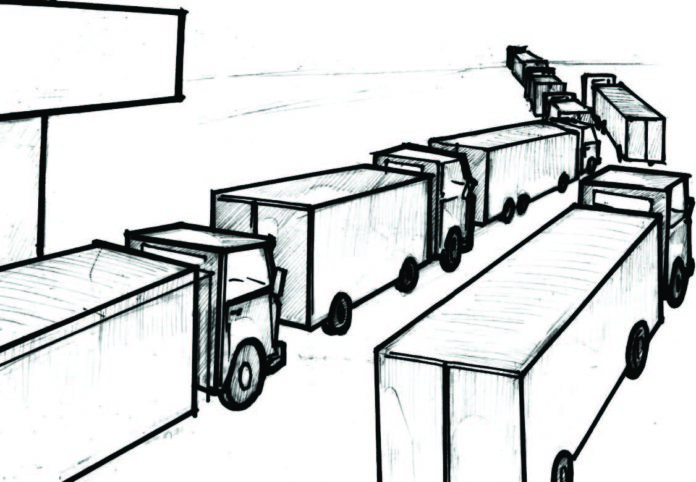 The news that truckers have raised the cost of moving a container from the Tin Can Island Port, Lagos, to any other part of the city by 50 per cent, has come without a surprise. But it is nonetheless of concerns. The Association of Nigerian Licenced Customs Agents (ANLCA) once disclosed that the nation was losing about N5 billion daily on account of the traffic gridlock along Oshodi-Apapa Expressway, Wharf Road, Marine Bridge, Ijora and Orile-Iganmu. To compound the challenge, a regime of extortion by sundry government agencies has led to a situation in which dozens of ships are stranded at anchorage due to lack of space to discharge new cargoes at terminals in the port.

According to latest reports, cargo evacuation from the port has been hampered by multiple toll points mounted by security operatives including men of the Nigerian Ports Authority (NPA), the Nigeria police, Nigerian Army and officials of the Presidential Task Team. The situation has negatively affected port operation as cargo delivery has been considerably slowed down, leading to astronomical rise in haulage and shipping cost, thereby fuelling inflation in the country.

While we hope the authorities will deal with the extortion and racketeering that make life difficult at the ports, there seems to be no solution in sight for the traffic gridlock that has festered for decades. On a normal working day, it takes an average of five hours to meander through the maze of tankers and trailers that have turned most of the roads in Apapa into no more than parking lots. What this implies is that the Apapa-Oshodi Expressway through the Tin Can ports is most often literally shut down. The same is true for the Seven Up/Apapa Bridge.

For several years, hoodlums have also taken advantage of this state of confusion to unleash mayhem on road users who have on many occasions had to abandon their cars to run for safety. Many have lost their lives and property worth millions to these men of the underworld. Yet, as the days unfold, the Apapa Business District gets worse for what it offers both residents and businesses. It is even more saddening to note that some of these problems are within human control.

Virtually every company located in Apapa is now being short-changed by the excesses and sharp practices of these tanker and trailer drivers as well as their owners. It is either that one tanker is struggling to avoid the queue and therefore drives from one end of the road down to the gate to beat those on the queue, or that another trailer has successfully beaten the others and is being given an executive clearance to load or offload. Of course at the other end are the owners of the tank farms and depots who do not allow these trucks into their parking lots. These help to create an atmosphere of chaos which makes life very difficult for Apapa residents and visitors.

In more civilised climes, what is happening in Apapa is anathema to decency in road usage while this armada of trailers and petroleum tankers will be considered primitive. Years of toeing the path of impropriety and poor infrastructure development and maintenance in the energy and other sectors are having their crushing toll on other forms of business. It is sad, if not tragic that Apapa, which ordinarily should be the heartbeat for corporate Nigeria, is a neglected business district whose infrastructure especially roads are not only decayed but ignored by the relevant authorities.