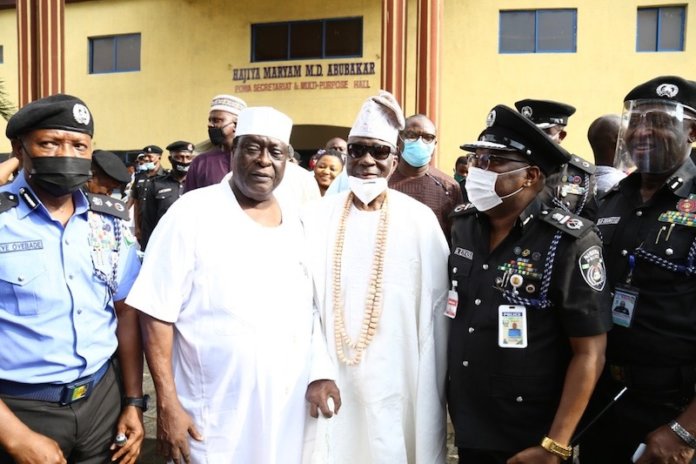 President Muhammadu Buhari and federal lawmakers have been urged to assign constitutional roles to traditional rulers to strengthen security and community policing in Nigeria.

That was the submission of former Inspector General of Police (IG) Tafa Balogun who was the guest lecturer at the flag-off of the Community Policing Awareness Campaign at the POWA Hall, Oduduwa Close, Ikeja, in Lagos.

At the event attended by Lagos Monarch, Oba Rilwan Akiolu, and the representative of IG Mohammed Adamu, Deputy Inspector General of Police (DIG) in charge of Research and Planning, Mr Adeleye Oyebade, Balogun called for better welfare for the police and constitutional empowerment of traditional rulers, as he revealed how retired IGs have been given the task of driving the community policing initiative in allocated states across the country.

He said he was happy to be part of the rebirth of community policing, as he reminded the audience about how he introduced the concept as a philosophy when he became IG in 2002 and made it one of his eight-point agenda, and how he sent officers to Britain for six months to train as community policing officers, after seeing how it had reduced crimes in some European countries and the United States.

He said, “We have all come to the conclusion that we cannot jettison the same police institution that we served. We’ll give the moral and whatever support to it.

“Don’t forget that the Nigerian community is our own, whether you’re from Sokoto, Osun, Lagos, Abia, Rivers or whatever. We cannot afford a communication gap between the community and the police. And that is the essence of community policing.

“Nobody is happy with what happened during the EndSARS protests when policemen were traumatized and killed. Barracks were burnt; the Oba of Lagos’ palace was vandalised. That was an abomination. We don’t treat our leaders like that. Things wouldn’t have been like that if there was no communication gap between the police and the community.

“It’s painful, but we have to put the incident behind us. So, that is the first point why I have to champion the cause of community policing. We have shared the responsibilities, three states per IG.

He said there would be a symbiotic relationship between the police and the community if the communication gap were closed.

Balogun recommended a rectangular synergy that means the police on one corner, the stakeholders on another corner, the government on third corner and traditional institutions on the fourth corner.

He added, “empower the traditional rulers, and restore their potency that was taken away by the colonial masters.”

Oba Akiolu urged policemen to be disciplined, civil, improve on their educational background and always remember that they are paid with tax payers’ money.

He told how he joined the police as a cadet sub-inspector, acquired education qualifications including a degree in law. He spoke about the recent EndSARS protest against police brutality, adding that although he lost so much when his palace was vandalised, the incident did not increase his blood pressure.

Oyebade told the audience from the military, DSS, NSCDC, community, religious, market and trade union leaders that IG Adamu has brought up the concept of community policing to address all heinous crimes in the Nigerian society.

He said, “What we are doing now engaging retired Inspectors General of Police to come out and speak to people and let them know what community policing is all about.”

According to Oyebade, the sensitisation in Lagos, Oyo, and Osun will be handled by Mr Tafa Balogun; Ondo, Ekiti, and Ogun, by Mr Sunday Ehindero; Rivers, Cross Rivers and Akwa Ibom by Mr Mike Okiro, and the Federal Capital Territory, Kwara, and Kogi, by Alhaji Aliyu Atta, among others.

The event was also graced by the Assistant Inspector General (AIG) in charge of Zone ‘2’, Mr Ahmed Iliyasu, and the Lagos State Commissioner of Police, Mr Hakeem Odumosu, who spoke about how the IG has reorganised the Community Policing concept.