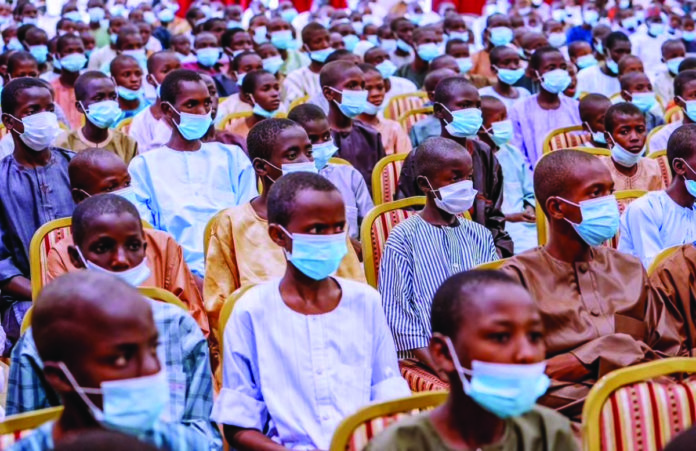 Although in the seeming absence of leadership, political order and law, life has become somewhat uncertain, solitary, poor, nasty, brutish and short, the denouement of the Kankara abduction incident, however, leaves so much to be grateful for, writes Louis Achi

According to the quaint English philosopher-historian, Thomas Hobbes, in a “state of nature”, human life would be “solitary, poor, nasty, brutish and short”. In the absence of political order and law, everyone would have unlimited natural freedoms, including the “right to all things” and thus the freedom to plunder, rape and murder; there would be an endless “war of all against all.”
As prognosis or prophecy, this Hobbesian insight strangely applies to the condition of the Nigerian state, currently.

Alongside Hobbes, the likes of Hugo Grotius, Locke, Rousseau, Kant and others helped to shape and deepen the Age of Enlightenment’s compelling governance tapestry of the social contract theory.

Cut to the bone, it’s a moral and political-philosophical theory or model that concerns the legitimacy of the authority of the state over the individual. It typically posits that individuals have consented, either explicitly or tacitly, to surrender some of their freedoms and submit to the authority of the ruler in exchange for protection of their remaining rights or maintenance of the social order. From the early 17th Century to date, it has emerged as the leading doctrine of political legitimacy in Western Civilisation.

Hence the social contract and its inherent political legitimacy are expressed in the foundational documents of most nations and international bodies. Section 33 of the 1999 Constitution of Nigeria (as amended), Article 3 of the Universal Declaration on Human Rights, Article 4 of the African Charter on Human and Peoples’ Rights capture these non-negotiable foundational imperatives: the right to life, liberty and security. Likewise, Section 14 (2b) of the extant Nigerian Constitution states that the welfare and security of the citizens shall be the primary purpose of government.

Even at that, the Buhari administration deserves some great commendation for not just pulling off the release of the students, but doing so at the nick of time. This has become instructive, when placed side-by-side with the Chibok experience, which still leaves some sour taste in the mouth. Many of the girls are yet to be rescued let alone reunited with their families.

However, same Thursday, the US Department of State condemned the abduction in a statement issued by a spokesperson Cale Brown and urged the federal government to hold those responsible for the kidnapping of Kankara school boys accountable “to the full extent of the law.”
Before the Kankara kidnap was the November 28 massacre of over 43 rice farmers in Zabarmari, in Borno State, by Boko Haram terrorists.

Four days ago, the US Mission in Nigeria also warned her citizens and others planning to travel to Nigeria that insecurity may increase during the holiday period proclaiming no place in the country was safe. This advisory was contained in a new security alert issued the US Embassy in Abuja and Consulate General Lagos and posted on the embassy’s website, stating that: “Crime is endemic throughout Nigeria.”

For good measure, it added that: “Terrorist organisations and individuals inspired by extremist ideology exist throughout Nigeria. We remind U.S. citizens to exercise caution while traveling and residing in Nigeria. Crime is endemic throughout Nigeria, ranging from petty street crime to carjacking, and crime levels tend to increase during the holidays.”

The Chief of Army Staff (COAS), Lt. Gen. Tukur Buratai, who recently sternly warned his men to perish any thoughts of a military coup, probably captured another dimension to the unfolding national security crisis.
When any nation’s army boss openly warns his men against consorting with the political class, especially in a setting suggestive of sinister collaboration to unhorse a democratic government, the message is usually unsettling. This was what transpired on December 4.

While the Nigerian Army decorated 39 newly promoted Major Generals, on December 4, COAS Buratai, warned generals to perish any ideas of a coup, vowing the Nigerian Army will never tolerate any agent of destabilisation bent on scuttling the current democratic dispensation.

According to the brawny army boss, the Army hierarchy was aware that some generals were being approached and his eyes are on them. “Democracy has come to stay. We will not tolerate any agent of destabilisation. The years of military misadventure in politics have never carried us anywhere. It is over. Do not hobnob with politicians”, he declared.

In May 2017, Buratai had also warned his officers against unholy alliances with politicians. The statement came on the heels of a major shakeup in the overburdened Nigerian Army then.
Given Buratai’s vast military experience and the substantial intelligence at his disposal, it would probably be folly to assume he is unaware of the implications of the message he communicated to his men then and penultimate week.

Nigeria is no doubt facing its most challenging times ever, with insecurity pervading the entire landscape. All security agencies must work together to stem the growing menace that is threatening to take the country to the hobbesian state of nature.