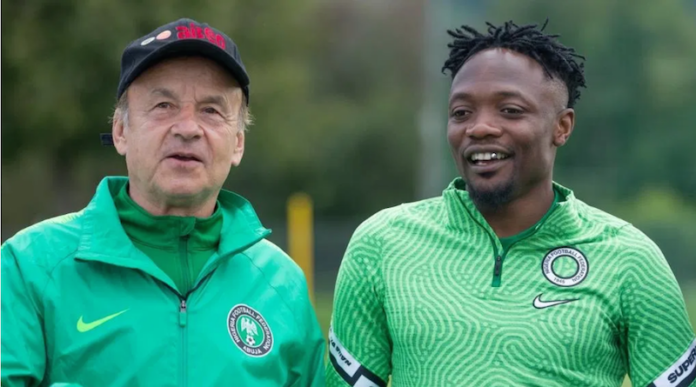 Following an incredible 2019-20 season with Bayern Munich, Lewandowski claimed the coveted recognition on Thursday after beating Juventus’ Cristiano Ronaldo and Barcelona’s Messi to the top prize.

Despite their contrasting choice of winners, Rohr and Musa both had an African star who helped Liverpool end their 30-year wait for an English top-flight title and also won the Fifa Club World Cup last season, in their picks

After selecting the Polish striker as his winner, Rohr picked PSG star Kylian Mbappe for the second spot while Senegal’s Sadio Mane was placed in the third position.
Musa, on his part, chose Messi to lead his pick followed by Lewandowski and Mane in the second and third places, respectively.

When the official voting results were released, Lewandowski had a total of 58 points while Ronaldo managed 38 points and Messi had 35 points.

For the Best Fifa Men’s Coach for 2020, Musa and Rohr chose Hans-Dieter Flick for the honour after the German’s success in his first season at Bayern Munich.

Flick led the Bavarians to a domestic treble of Bundesliga, DFB-Pokal (German Cup), and the DFL-Supercup. He also guided them win the 2019-20 Uefa Champions League and the Uefa Super Cup.
They both voted Liverpool’s Jurgen Klopp as the second-best manager in the world after his Premier League success last season but the third spot took a twist.

Although he was level on 24 points with Flick, Klopp was declared winner for the second time in a row after gathering the highest number of votes from national team coaches while Leeds United’s Marcelo Bielsa was third with 11 points.