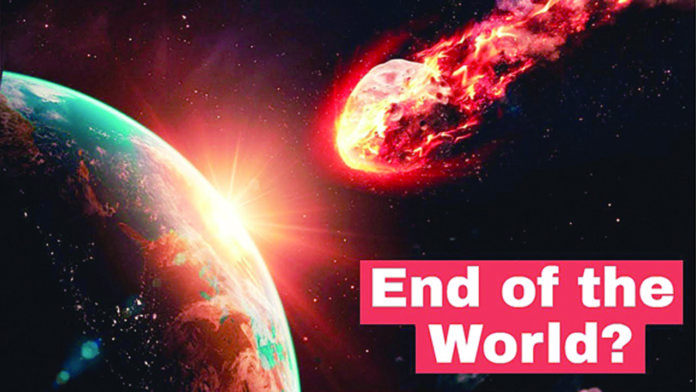 A national newspaper recently carried a story titled: “Why world might end by 2068.” According to the report, “come 2068 and the whole of humanity could be potentially wiped out due to an asteroid attack. According to astronomers, an asteroid named ‘Apophis’ is expected to pass extremely close or may hit the Earth in 2068 due to a phenomenon called Yarkovsky effect . . . ” I would like to use this medium to express my disagreement with, and disbelief in such propositions, and also to encourage other people who might read about such speculations, not to believe them.

Throughout history people have been struck with awe as they gazed at the sun, the moon, and the stars. By studying the positions and movements of those celestial bodies, humans have been able to mark the passing of days, months, and years.
As a Christian, I respect the achievements of science and believe in scientific findings that are supported by evidence. According to one dictionary, “Science is the study of the nature and behaviour of natural things and the knowledge that we obtain about them.” Although the Bible is not a science textbook, it encourages people to study the natural world and to benefit from the scientific findings of others. However, it is important to note that science has its limitations. I do not believe that science can answer all of mankind’s questions.

You may wonder, though, about 2 Peter 3:7 where the Bible says that “the heavens and the earth which are now, . . . are reserved unto fire against the day of judgement . . . ” (King James version). Does this mean that the earth will be burned up? Actually, the Bible sometimes uses the terms “heavens,” “earth,” and “fire” figuratively, as symbols. For example, when Genesis 11:1 says: “And the whole earth was of one language, and of one speech,” it uses “earth” to mean human society.

The context of 2 Peter 3:7 shows that the heavens, earth, and fire mentioned there are also symbols. Verses 5 and 6 draw a parallel with the Flood of Noah’s day. On that occasion, an ancient world was destroyed yet our planet, Earth, did not disappear. Instead, the Flood wiped out a violent society, or “earth.” It also destroyed a kind of “heavens” – the people who ruled over the earthly society. (Genesis 6:11) In the same way, 2 Peter 3:7 foretells the permanent destruction of wicked society and it’s corrupt governments as if by fire. Then, in harmony with 2 Peter 3:13: A “new earth” or new human society, will be ruled over by ” new heavens,” or new leadership – God’s Kingdom. Under the rule of that Kingdom, the earth will become a peaceful paradise. -Revelation 21:1-4.

In view of the foregoing, when the Bible speaks of “the end,” it refers to: one, the end of failing human governments; two, the end of war, violence, and injustice; three, the end of religions that have failed God and humans; four, the end of the people who perpetuate and support the current state of affairs.
The end is NOT: an epic, flaming destruction of the earth; a random, unscheduled event, triggered by humans or by debris hurtling through space.

Furthermore, God’s inspired Word, the Bible, assures us that our planet Earth will never be destroyed, burned in fire, or replaced. The Bible teaches that God created the earth to be inhabited forever. We can see these in the following scriptures: Psalm 104:5: ” He (God) has established the earth on its foundations; it will not be moved from its place* (*or will not totter) forever and ever.”

Psalm 37:29: “The righteous will possess the earth, and they will live forever on it.” Ecclesiastes 1:4: “A generation is going, and a generation is coming, but the earth remains forever.” Isaiah 45:18: “For this is what Jehovah says, The Creator of the heavens, The One Who formed the earth, it’s Maker who firmly established it, Who did not create it simply for nothing, but formed it to be inhabited: “I am Jehovah, and there is no one else . . . .Also, God will not allow humans to ruin the earth completely by pollution, warfare, or any other means. In His own due time, he will “bring to ruin those ruining the earth.” (Revelation 11:18).

So, in view of all the points highlighted above, will planet Earth be destroyed by an asteroid attack come the year 2068, or at any other time? . . . The clear answer is NO!