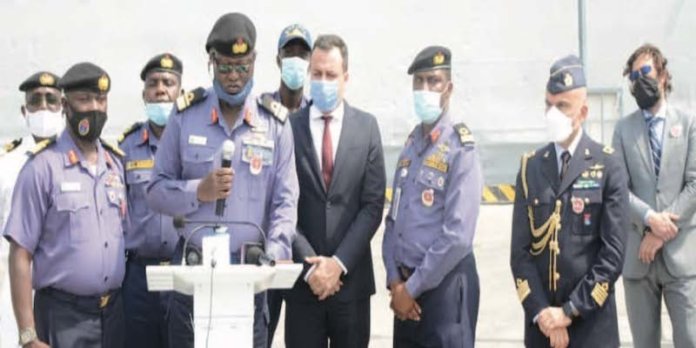 Chiemelie Ezeobi and Mary Ovie write that to promote Nigeria’s bilateral relations and in furtherance to the safety of Gulf of Guinea waters, the Nigerian Navy recently held a joint exercise with its Italian counterpart

On October 2020, the Italian Ambassador to Nigeria, Stefano Pontesilli, paid a courtesy visit to the Naval Headquarters in Abuja and one of the fallouts of that meeting with the Chief of the Naval Staff (CNS), Vice Admiral Ibok-Ete Ibas, was the strengthening of ties between both countries.

At that meeting, the CNS had assured that the Nigerian Navy (NN) will continue to maintain existing relationships with its partners and work on the same trajectory towards sustaining the gains recorded in securing the Gulf of Guinea (GoG), especially since there was an already existing close collaboration between the GoG regional navies towards stemming the tide of recent incidences of insecurity in the region.

Ibas further assured that the navy is open to exploring other avenues in the areas of training and capacity building for its sailors in hydrography as well as technical expertise in the operationalisation and maintenance of the Leonardo helicopter.

Speaking earlier, the Italian Ambassador stated that Italy was favourably disposed to further cooperation with the GoG in anti-trafficking and maritime security operations.

Months after that visit, a joint exercise came to fruition named Exercise SHARK RIVER. The exercise kicked off at the NNS BEECROFT Jetty Apapa and lasted from November 24 to 26 onboard five NN platforms and Italian Navy Ship FEDRERICO MARTINENGO.

Aimed at promoting bilateral relations between both countries, the overall essence however, was in furtherance to safety of the Gulf of Guinea waters.

After taking the entourage on a brief tour, the Flag Officer Commanding (FOC), Western Naval Command, Rear Admiral Oladele Daji, in his remarks at the commencement of the exercise, said it was a combined one with their Italian foreign partner.

He said: “The exercise is a combined exercise with one of our foreign partner, Italian Navy which is represented by Italian Navy Ship (ITS) FEDERICO MARTINENGO. It would be recalled that the ITS MARTINENGO has been in the Gulf of Guinea and in the shores of Nigeria as part of effort to strengthen regional cooperation with friendly navies and promote bilateral relations in order to ensure effective collaboration in the fight against all form of criminalities especially in the maritime domain.

“As you may be aware, the issue of maritime crime has international dimensions and could be characterised as a global challenge. This global challenge therefore requires a globally framed response and collaboration. In recent times, the trend has taken a new dimension where criminals carry out these atrocities outside the shores of Nigeria and thereafter relocate to parts of our country as safe haven to perpetuate these heinous act.

“In the past, the command have intercepted some of these criminals in our waterways. For instance, the 10 suspected pirates that hijacked the Chinese fishing vessel, known as HAILUFENG 11 and others were intercepted by Nigerian Naval deployments under the ECOWAS Zone E maritime protocols of the Yauode Accord. The case is currently been prosecuted under the recently enacted suppression of piracy laws.

“Looking at the current scenario, the activities of pirates in the Gulf of Guinea in particular is following the same dimension. It is therefore logical to synergise with friendly navies such as the Italian Navy to combat these crimes on all fronts.

“In the cause of carrying out our statutory responsibility of protecting the Nation’s maritime domain in Western Naval Command Area of Responsibility, the command had earlier engaged in series of exercises and operations in the past like (OPERATION JUNCTION RAIN, OPERATION SWIFT RESPONSE, EXERCISE ATEGUN ALAFIA, EXERCISE OKUN ALAFIA I and TREASURE GUARD II) resulting in several arrests and handover of suspects/platforms used in committing illegalities to relevant law enforcement agencies for prosecution.

“The exercise would also provide the platform to align our training objectives with our operational requirements in furtherance of the mission of the Chief of the Naval Staff, Vice Admiral Ibok-Ette Ibas, which is “to develop a naval force that is well trained, organised and highly motivated to discharge its constitutional roles professionally and efficiently for the defense of Nigeria in ensuring her economic prosperity”.”

Additionally, Daji added that it will also provide a test bench for the planning and execution of coordinated strike capabilities and assessment of some of our planning assumptions.

Thus, in line with the mission of the CNS, he said they gathered for EXERCISE SHARK SHIVER, adding that the exercise was among the series of similar ongoing exercises in Western Naval Command Area of Responsibilities and across the operational commands of the navy.

Reiterating that the command would spare no efforts in ensuring a safe and secured maritime environment, he further assured the public, especially maritime operators, that the command will always be there to provide necessary conducive environment to enable seafarers carry out legitimate businesses in our waterways.

At the end of the exercise, the Italian government reiterated its commitment to collaborate with Nigeria on improved maritime security. Making this pledge, the Deputy Head of Italian Mission to Nigeria, Tarek Chazli, said he was pleased the vessel had prior to the joint exercise, carried out several anti-piracy interventions in the region.

Chazli had earlier led members of the Italian diplomatic community from Abuja to receive the Italian Navy Ship, FEDERICO MONTENEGRO at the Fairway Buoy after the exercise.

In his remarks he said: “I recall one in front of the waters of Benin Republic and one in front of Nigeria’s waters where our ship was called upon and in cooperation with the local naval force, engaged with situations where there were acts of piracy going on and brought same under control.”

Harping on the bilateral relationship between both countries, he said it has transcended many decades without disputes and was mutually beneficial.

He further said: “As the representative of the Embassy of Italy here, I can say we are witnessing the conclusion of indeed very successful joint exercise which we were able to do despite the coronavirus pandemic. I want to salute the magnificent work done by the Nigerian Navy and by the Western Naval Command in particular.

Over the last three days, I had the chance to gather with my team, to witness the efficiency and the commitment to duty.

“I commend the high skills of the Nigerian Navy. That is why Italy is now extending commitment to the security of this part of the world. The success of our joint exercise has guaranteed that more collaboration will follow and we are very confident that next year we will have longer presence and closer collaboration and we will be ready to welcome the ships.

“What we have done is only small part of the larger effort, to combine our forces, to fight common transnational and international issues like piracy and other security risks not only for the country or Gulf of Guinea but the larger world.“

At the end of the exercise, it was reviewed by the Chief Staff Officer (CSO), WNC, Rear Admiral Yakubu Pani, who said the security of the GoG and other neighbouring maritime domain is key to regional maritime stability and security.

Accordingly, he said the conduct of these forms of maritime exercises will be sustained with other friendly navies as “we continue to collaborate and partner for collective interest of the region. It is pertinent to state that the exercise was rewarding as it has impacted positively on the proficiency of personnel in several areas of training.

“The exercise also provided the platform to align our training objectives with our operational requirements in furtherance of the mission of the Chief of the Naval Staff, Vice Admiral Ibok-Ette Ibas”.

Additionally, he said it provided a test bench for the planning and execution of coordinated strike capabilities and assessment of some of their planning assumptions as some of exercises conducted include Anti-Piracy Operations, Rig Protection, Fleet maneouvre, Communication, Vessel Board Search and Seizure, Search and Rescue among others.

At the end, he said the exercise was generally adjudged successful and intended to assess and revised to stay relevant in their quest to conduct decisive maritime combat operations.