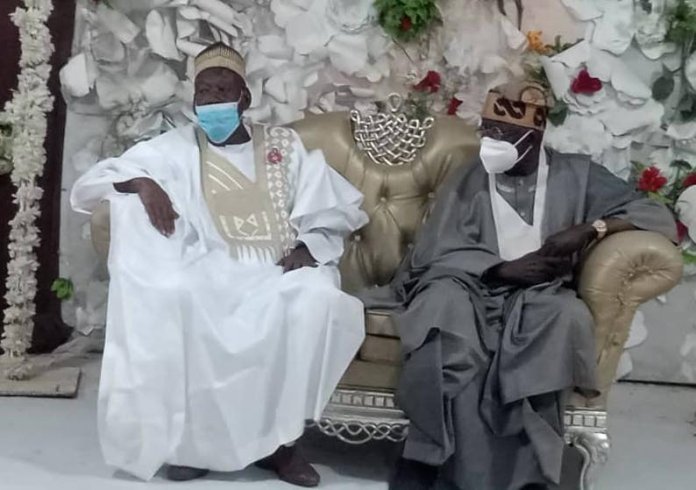 The National Leader All Progressives Congress (APC), Asiwaju Bola Tinubu, yesterday in Kano said the unity of this country was paramount to him.

Tinubu spoke at Wedding reception held at Meena Event Centre Kano.
He said “we must work hard for the unity and development of the country, because the dividers will not stop in trying to divide the country, but if we are united, they will not achieve.”

According to him, the unity of the country was one of the major areas that should be given more priority in our daily activities.

“Within 24 hours’ notice I received for the wedding Fatiha, I feel I must come, therefore I informed Governor Ganduje that I’m coming even if he is not around.”
Tinubu prayed for the couple, Naisa Muhammad Bin-Uthman, and Nuruddeen Adam, a happy married life, long life, good health and blessed family. Also speaking, Governor Ganduje said the marriage was an important wedding considering the family of the couple.

“Looking at the calibre of people at the wedding Fatiha, it is a clear indication that Bin Uthman has been contributing immensely towards the promotion of Islam and unity of the country.

“I was having a programme outside the city, but when Tinubu told me he was coming to Kano for a wedding Fatiha, even if I am around, I decided not to go anywhere until he has left,” Ganduje said.

Earlier in his welcome address, Shiek Muhammad Bin Uthman commended Tinubu and Ganduje for blessing the wedding Fatiha, saying it was an indication that Nigeria is united.
Among the dignitaries that attended the occasion include Malam Nuhu Ribadu, Chief Bisi Akande among others.