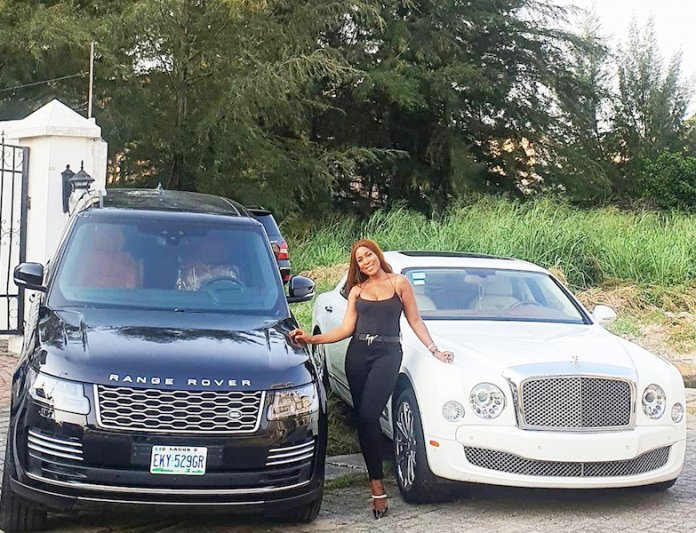 It is widely known that popular blogger, Linda Ikeji is super rich, and with means not a few single mothers and women her age would aspire. But the internet sensation croons she’s “still looking for hubby sha.” Ferdinand Ekechukwu reports

Despite all the accomplishments and possessions, Linda Ikeji wants a man in her life. The mother of one made this known via her Instagram page last Tuesday, while showing off two of her expensive cars. The multimedia personality expressed excitement about the kind of life that she is living. The former model said she is living her dreams on her own terms. The celebrity blogger, noted that though she is independent and strong, she still needs a partner.

The media woman had shared a photo of herself posing with her new 2020 Autobiography Range Rover and her Bentley Mulsanne cars. She bought the Range Rover as birthday gift to herself. Standing beside both cars, the blogger stated that she is living the life of her dreams on her own terms. Speaking on the desires of her heart, Linda wrote: “Living the life of my dreams…on my own terms! #RR2020 #BentleyMulsanne. #womanlikelinda. Selfmade. Strong. Independent. But I’m still looking for husband sha…”

This comes two months after celebrating her big 40th birthday and splurged herself with designer shoes and bags. Noting that she loved her life, Linda stated that one of the perks of being financially independent was that she could do whatever she liked. But as it is, nothing appears to be more important to Linda than family. For years she had hammered on how much she was looking forward to getting married, having children and building her own family and she believed God was going to come through for her on that one wish, “but I have come to understand that we have no control over what life throws at us no matter how much we plan, pray, or work.”

Her dream of building a family with her baby daddy (Sholaye Jeremi), crashed when she “fall pregnant” and gave birth to her lovely son, Jayce. That relationship went viral back in 2018 and was the butt of jokes after the blogger announced that things between them have gone sour. Linda would then come under heavy criticism after she revealed her pregnancy outside wedlock. She even faced heavier criticisms when she revealed that she and her baby daddy had gone their separate ways.

She went on to tell-all how their relationship started following her one night chance at Wheat Baker Hotel and how the Jeremi dumped her after impregnating her. Prior to meeting her estranged baby daddy, Linda once revealed that “the most important thing is a man who supports what I do. If he doesn’t support it, there is no Linda Ikeji and the person. That cannot happen. A man who respects women, who is kind-hearted, has his own money, has a job.”