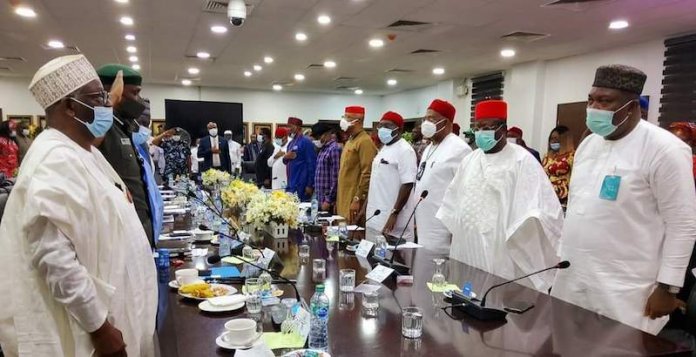 A pressure group, Igboezue that covers the interest of the South-east geopolitical zone rose up yesterday from an emergency meeting in Awka, Anambra State insisting that time was long overdue in the interest of equity and justice for power to rotate to their zone in 2023.

The group lamented what it called “gross marginalisation and shunting of their region from development projects which had been extended to the political sphere and warned the time to stop such was now.

A communique signed by its National President, Chief Pius Okoye and National Secretary, Chief Everest Ezihe read, “The realisation of the clamour for Nigeria President of Igbo extraction in 2023 is non-negotiable. It’s in the overall interest of equity, fairness and natural justice. All political parties in Nigeria should zone their presidential candidate to South-east.

It’s a true strategic measure of healing the wounds of the civil war. However, we appeal to Igbo leaders and organisations crusading for Igbo course to join hands in building diplomatic bridges of conviction and understanding among other ethnic groups in giving Igbos a chance to saddle on the affairs of the nation, 53 years after the end of the civil war.

“He who goes to equity must go with clean hands, similarly, we are seriously in support of gubernatorial zoning arrangement in Anambra State as enshrined and endorsed by the founding fathers of the state as well as her prominent traditional rulers.

Anambra state is sitting on a political tripod which represents the South Senatorial Zone, The North Senatorial Zone and the Central Senatorial Zone. It’s a historical fact that the North and the Central have in the recent past governed the state. Therefore, in respect to the State’s Charter of Equity and total adherence to natural Justice, it’s right and proper that Anambra State 2021 governorship seat be ceded to person of Anambra South Senatorial extraction. We advise that politicians should detest changing the goal post, simply because of selfish and pecuniary interests.

“We observe with dismay that President Muhammadu Buhari, as the Commander in Chief of the Armed Forces is treating issues concerning the protection of lives and properties of Nigerians with levity. Thus, the wanton killings of innocent Nigerians by the Boko Haram Islamic militants have gone unabated for years now, we demand that President Buhari should sit up or resign for gross administrative incompetence.

“We are equally worried on the lopsided infrastructural and human capacity developments being piloted by the federal government, thus why we are totally in support of immediate restructuring of the nation anchored in true federalism.

“We also observed with total disappointment, the state of federal roads in the entire South-east geopolitical region which amounts to deliberate neglect as death traps. The terrible state of the roads and infrastructural decay in the region have only reawakening and ignited the psychological trauma of defeated people during the short lived Nigeria/Biafra war.

We re-appeal to the Federal Government that now the raining season is over as their perennial excuses, they should give accelerated attention towards the rehabilitation of the federal roads and other dilapidated infrastructural projects in the region.”
The further commended the South East governors for their security approach especially in implementing community policing.