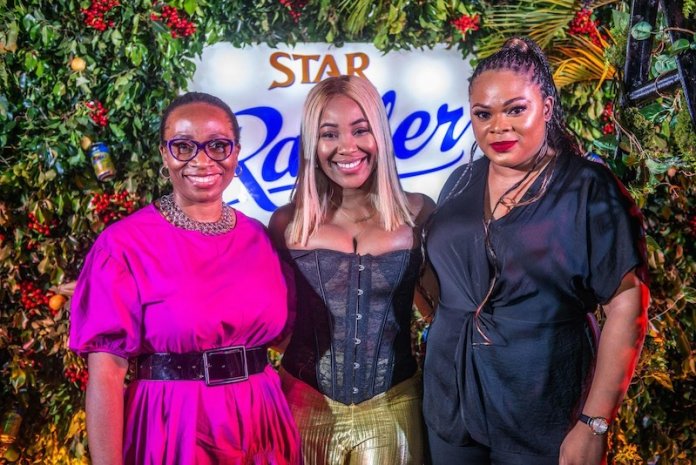 Chiamaka Ozulumba writes that for the past five years, Star Radler has leveraged several key events and consumer interests to drive increased consumer trial and retrial, shift public perception favourably, and appeal to the brand’s target audience across all regions. This, they said reflects the story that defines Erica Ngozi Nlewedim, the newly appointed brand ambassador for Legend Extra Stout and Star Radler

The Star Radler, from the time of its entry into the Nigerian beer market, was highly recognised for its quality, unique flavour and taste of summer, bridging the gap between those who love the fine taste of beer and those who enjoy lighter flavours, providing the right satisfaction for consumers. Perhaps the only beer to appeal to all genders, Star Radler delivers a delicious punch of fruit flavours mixed with beer.

For the past five years, Star Radler has leveraged several key events and consumer interests to drive increased consumer trial and retrial, shift public perception favourably, appeal to the brand’s target audience, and cut across all regions. With the campaign theme “Twice the Refreshment’, the brand is set to once again excite its teeming young alcoholic consumers. For a brand quite young in the market, it is a true success story.

Surely, true success is not merely crossing the finish line. What gives value to it are setbacks overcomed, and nothing feels more fulfilling and inspiring than the tale of a victor. In many ways, this has come to be the story that defines Erica Ngozi Nlewedim, the newly appointed brand ambassador for Legend Extra Stout and Star Radler.

While Erica is famed for her 48-day stay in the Big Brother house, prior to that, the fair damsel had her entire career on the course she had imagined – model, actress, singer, and brand ambassador. She has had a taste of the spotlight, but this didn’t come on a platter. It took a lot to accrue these titles. Raised by her mother Oby Nwokolo, Erica was groomed to project Amazonia qualities.

In her late teens, she launched her career after landing her first ambassadorial role in 2013 for a beauty and cosmetics brand. As an extension, she competed in a beauty pageant but failed to place well. Not solely banking on her looks, she proceeded to have a career in Nollywood, debuting her acting career in ‘Secrets and Scandals’ in 2015, and later went on to appear in a handful of movies. She would later enrol in the Met Film school in London.

At just 26 years, Erica has already made a name for herself through sheer hard work and dedication. Little wonder she was picked from a pool of hopefuls to be the brand ambassador for Nigerian Breweries’ top selling brands.

Audacious, Erica is a true reflection of what the Star Radler brand projects: vibrancy, youthfulness, unrestraint, and a refreshing personality.

Introduced into the Nigerian beer market in June 2015, the Star Radler brand became popular among young people due to its genius blend of Star Lager beer and citrus flavours juiced from lemon and lime. Although alcoholic, the brand is tapered to offer a reduced alcoholic content to help youngsters who are new to the beer scene, drink more responsibly.

Over the years, the Radler brand has grown from strength to strength with its target market, in turn, expanding its market shares. To reflect this journey in a pattern that is relatable, it mirrors Erica’s well-known journey in the entertainment industry that encompasses being a model and beauty queen, an actress, and an adored reality TV show star. This comparison couldn’t be a more precise fit. Just like the various career togas she dons, her ambassadorship helps enunciate the brand’s need to extend its lead in the market through diversification.

Following the relaunch of the original Star Radler brand, a new variant was added to the beer mix portfolio – Star Radler Red Fruits. The variant is marked by its unique tart flavour that provides a pleasurable experience to a broad range of fun lovers seeking a refreshing and sensuous beer experience.

Although qualities that mark the Star Radler brand slightly deviate from those of Legend Extra Stout that mostly embodies originality, boldness, and strength, it was imperative to appoint a personality with all these characteristics galvanised into their being for the latter’s representation.

The Legend Extra Stout is greatly remarked for its qualities of being a bold and daring brand which thrives on originality. Since its entry into the Nigerian beer market, it essentially maintained its status by projecting a dogged outlook even in the face of competition. By the time of its entry into the stout segment of the market, it faced competition from existing brands already dominating the segment. However, through its unique blend of ingredients and positioning as a brand for young, vibrant stout lovers, it managed to clinch an impressive portion of the stout market.

Now, while Erica is easily noted for her youth, it goes deeper than the physical for a young lady pushing the bounds in her own way. Boldness and authenticity are requisite to having one’s voice heard, and Erica proved herself long before BBN with her career trajectory, and so has the Legend Extra Stout brand over the decades.

Recently, the premium Legend Extra Stout brand underwent a reformulation of its recipes to meet contemporary demands of stout lovers. The relaunch introduces the updated version of Legend Extra Stout bearing a new label featuring the signature Legend torch and a generous complement of the colour black.

“As evidenced in the past, Nigerian Breweries is a champion of constant innovation in a bid to ensure the optimum satisfaction of our consumers and to make our brands refreshing and exciting. After a brief period of silence for both brands, we felt it was time to refresh them and re-introduce them to our loyal consumers,”

Obviously, with the Legend Extra Stout brand, perfection is trumped by originality, boldness and strength.

Drawing from Erica’s expedition in the Big Brother House that led to her disqualification, the Legend brand recognises flaws and accepts them just fine. It pushes the message of self-acceptance, and self-love, with a touch of humility. While mistakes abound, learning from them is imperative.

In what can be best termed as a moment of weakness under the influence of alcohol that led to her disqualification. On the bright side, realising her wrongdoings and apologising, drew the Legend Extra Stout and Star Radler brands to her. This single action revealed growth; a willingness to make compromises and work with others to attain set goals — qualities both brands encourage in its youth consumers.

Reflecting on her placement as a brand influencer, Erica said: “Here’s the deal – coming on board as an influencer goes deeper than the hype. When I was approached by the team, it came as a shocker because given my history with Big Brother Naija, it was not a realistic dream for me. I was approached with the aim to reach the young consumers and now more than ever, the struggle is even tougher.

“How do they stay the course without letting public opinion hinder them? The message is simple – be original, be free to do what you want, do it your own way and at your own pace. It’s okay to make mistakes but what remains important is that they rise above it and try harder until they reach their full potential. It’s why the brand is saying – Go with Your Flow.

“Once this was clear, I understood that my errors could be used to tell a story of encouragement and that is what it is about for me – letting my fans know that falling down is easy but a true ‘Elite’ knows to get up and fight back for greater heights.

“On the other hand, the relationship between Star Radler and I was pretty straight forward and relatable. Star Radler is about having fun, being adventurous, trendy and feeling relaxed and refreshed. That’s my personality in an alcoholic drink. You don’t find that so often.

“When you think about having Radler moments, you think about easing off stress, chilling off somewhere doing the things you love and the opportunity to share those moments with other people is something I would do anyway, except now, there is a Star Radler in the mix, with two variants with a reminder for everyone to experience ‘Twice the Refreshment’. This makes it all the more interesting. For me, accepting both brands created that balance every youth should have in their lives,” she added.

In closing, Erica shared principles guiding her on her career journey: “Life is not so easy but while you are having your fun, know your limits and understand that you will make mistakes but that should not deter you from your goal.”

With its highly successful campaign as yet, the relationship fostered between the brand and Erica, is bound to lend a voice to millions of youths to aspire to greatness amid flaws that distinct them.