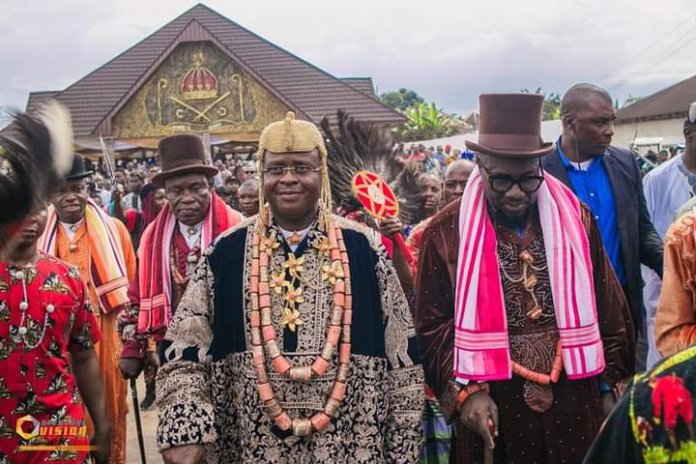 The King of Nchia Eleme Kingdom who is also the Egbere Emere Okori Eleme and Paramount Ruler of Ogale clan, in Eleme local government Area of Rivers State, His Royal Highness, King Dr. Amb. Appolus Chu (JP) in company of some members of Eleme council of Chiefs and Elders received back home, an illustrious son of Eleme Kingdom, His Excellency, Chief Ambassador Oji Nyimenuate Ngofa after his outstanding service to the Nigerian State as Ambassador to the Netherland.

Receiving the Eleme born Nigerian Diplomat, His Royal Highness King Appolus Chu commended Amb. Ngofa for his glorious service to the nation without a dent on his image which has brought honour and dignity to the Eleme ethnic nationality.

While decrying lack of national personalities to represent Eleme ethnic nationality as one of the greatest challenges bedeviling the people, King Chu however thanked God for raising a national figure as Amb. Ngofa in Eleme Kingdom.

He further called on all sons and daughters of Eleme to support and protect personalities and national figures that God has raised and will still raise in the kingdom, adding that the pull down approach of some indigenes and leaders of Eleme against there brothers who through their personal and collective efforts, struggled to rise to a national figure should be discontinued; and advised the people to rather pull their individual influence together to protect their brothers and advance the cause of Eleme Kingdom.

King Appolus Chu who highlighted the various iconic infrastructural achievements of Amb. Ngofa during his tenure as the council chairman of Eleme local government which received accolades from numerous well-meaning people of Eleme, went on to confer on the Former Ambassador “EMERE ODALA-ETA-EBO” chieftaincy title shortly after he was decorated with Eleme traditional apparel.

In a swift remarks, the Eleme first ever Nigerian Ambassador, His Excellency, Chief Hon. Amb. Oji Nyimenuate Ngofa revealed that he was conscious of the name and image of Eleme and that spurred his focus on the delivery of services that will bring glory and dignity to Eleme ethnic nationality, adding that his performance which is in the public domain was evidently devoid of any dent on his name or the image of Eleme kingdom.

He further declared his total support for King Dr. Appolus Chu as the authentic Oneh Eh Nchia haven been selected and coronated in line with the customs and traditions of Eleme people, stating that he will not support any traditional ruler that steals from the community wealth to enrich himself and family.

Ngofa noted that whereas King Chu utilizes his personal hard earned resources to develop the community and better the lives of the people through his numerous philanthropic gestures, other self made traditional rulers who pride in government recognition steal monies and convert resources belonging to the community for there personal use.

He said Eleme people need a man like King Appolus Chu who is empathetic with integrity to lead the people as King.

We are looking for men that know what power means. Power is not what you utilize to oppress those you are bigger than, power is what you utilize to comfort and lift those who are weak. That is the true meaning of power. That is why today I have come to declare my support for King Appolus Chu”

Ambassador Oji Ngofa went on to appreciate God, President Buhari, the Honourable Minister of Transportation, Rt. Hon. Rotimi Ameachi, King Appolus Chu and the entire people of Eleme for the honour given to him.

You will recall that Chief Oji Ngofa made the list of Ambassadorial nominees of President Muhammadu Buhari as a non-career Ambassador on the 20th October 2016 and was subsequently confirmed by the Nigerian Senate later on, resumed office at the Nigerian Embassy in the Hague, Netherland precisely on the 20th of October 2017 as Ambassador Extraordinary and plenipotentiary.

He hails from Ngofa Community in Aleto clan of Eleme local government Area of Rivers State and is one of the Nigerian Ambassadors who received and hosted the President of the Federal Republic of Nigeria, Muhammadu Buhari GCFR during his official visit to the government of Netherland.

Prior to his service as Nigeria Ambassador to Netherlands, Chief Hon. Oji Ngofa served as the Deputy National Secretary of the All Progressives Congress between 14th of June, 2014 – to October 2017, Executive and caretaker chairman of Eleme Local Government council between 25th April 2008 – December 2014 with landmark projects to his credit.