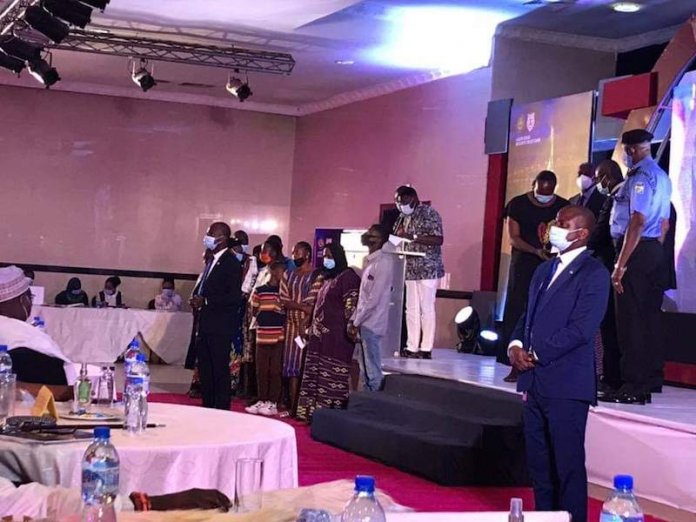 The six police officers lynched in Lagos State in the wake of the violence that trailed the recent nationwide EndSARS protests may not have died in vain.

Governor Babajide Sanwo-Olu compensated their family members with N10 million each on Thursday, fulfilling the State Government’s pledge made during an earlier meeting with police officers at the State police command.

The Governor’s gesture, the beneficiaries said, has not only wiped off their tears, it has also brightened their hope to attain the future their slain breadwinners had envisioned.

As part of the promise to the families, Sanwo-Olu also announced scholarship awards to the children of the deceased officers up to the university level.

The Governor presented cheques to the wives and children of the slain officers at the 14th Town Hall meeting on security held at Civic Centre on Victoria Island. The yearly event with the theme: “Lagos Security: Resilience in the Face Adversity”, was organised by the Lagos State Security Trust Fund (LSSTF).

Sanwo-Olu described the slain officers as “heroes”, saying the deceased sacrificed their lives to secure lives and properties in the State. He said the compensation was the State Government’s modest reward for their gallantry, pointing out that the gesture would help the families to heal from the loss.

According to him, “Some of our gallant police officers paid the supreme price for our security and safety during the recent EndSARS protests. These are the officers deployed to protect our families from hoodlums but they were lynched in the violence. Today, I am happy to announce and present N10 million compensation through LSSTF to each family of the officers. All their children have also be placed on scholarship up to university level, courtesy of the State Government.”