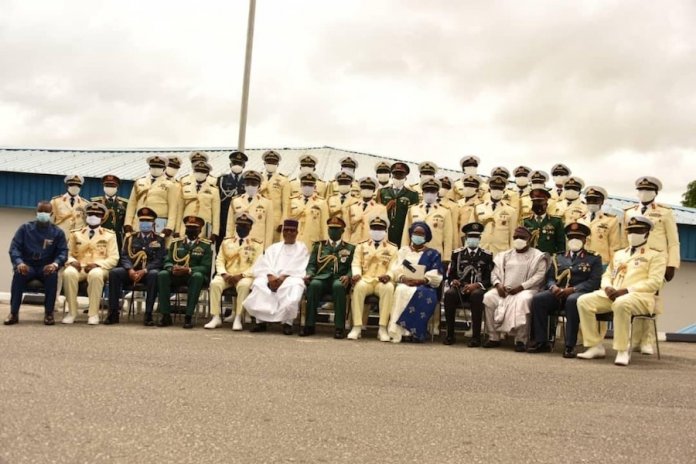 Worldwide, war colleges are a place of original research on all questions relating to war and statesmanship connected with war or the prevention of war. Although this statement has been credited to Admiral Stephen B. Luce, it is no less true of what war colleges embodies, even in Nigeria.

For the Naval War College Nigeria (NWCN), which is the highest naval training institution in Nigeria, it was built to boost security in the maritime sector, as well as enhance the capability of naval officers to make sound decisions, both in command and management positions.

In essence, it is saddled with the primary responsibility of meeting the professional manpower needs of the Nigerian Navy (NN). The college, being mindful of its statutory roles, has successfully aligned its professional training to coincide with current NN operational realities/requirements. This means that contemporary operations training with requisite curricula were emplaced.

Undisputedly, the immense contributions of the graduands to the operational successes of the NN are evident in the exploits of the service both home and abroad.

Recently, the college graduated another set of participants in Calabar, which is the fourth of its kind since the college was established in May 2017.

For the recent graduands, consisting 21 participants- 18 from the NN, two from the Nigerian Army and one from Nigerian Air Force, which made up the fourth course on Naval Warfare, they commenced online on April 24, 2020 due to the onset of the COVID-19 pandemic in the country and later resumed normal classes.

In his speech, the Minister of Defence, Major General Bashir Magashi (rtd) reaffirmed the commitment of President Muhammadu Buhari’s administration to continuously support the AFN to develop requisite capacity to tackle the security challenges bedeviling the country.

The minister, who was the special guest of honour at the graduation and was represented by the CDS, noted that the country is currently beset with myriad of threats that has affected the overall security of the nation, adding that these threats have seen the Armed Forces engage in various operations across the country to curtail the myriads of security challenges especially the insurgency in the North-east, banditry and rampant kidnapping in the North-west as well as other agitations and violent crimes in all parts of our nation.

As such, he saluted the efforts of the navy for its significant contributions towards improving national security both in the hinter land and

across the nation’s maritime domain, just as he

congratulated and commended the graduands for their resilience and hard work to successfully complete the course.

In this regard, he reminded them that the expected training outcome would be seen in their capacity as they imbibe practical and pragmatic approach to overcoming security threats to the corporate existence of the nation.

He opined that upholding the standards set for this level of training would develop the much needed capacity to overcome current and future security challenges of the nation, thus the need to do the nation proud in any capacity they find themselves.

Meanwhile, the Governor of Cross River State, Professor Ben Ayade while delivering a goodwill message at the graduation ceremony appreciated the efforts of the AFN in general and the NN in particular towards ensuring collective security in the state.

The governor, who was represented by the Deputy Governor of the State, Dr Ivara Esu commended the invaluable support and contribution of NN at providing security to the state.

According to him, the establishment of the NWCN in Calabar has enhanced security, engendered development and further cemented the long standing cordial relationship between the navy and the state.

Applauding the leadership of the NN for placing importance to training of its personnel, he promised that the state government will continue to support and collaborate with the navy in the discharge of its constitutional role of defending the nation and providing security in the state.

The NWCN was instituted with the vision to be a centre of excellence on naval/joint military operations and maritime security studies in the sub-region. Essentially, its mission is to develop senior naval leaders and equivalent from other services as Operational Level Commanders with thorough appreciation of complex national security problems, who are prepared to make sound decisions in the application of maritime force as a policy option.

According to the navy, the need to fill the observed skills, abilities and knowledge gaps within the management cadre to enhance NN capacity to respond to the complex emerging maritime threats, necessitated the establishment of the Naval War College.

Thus, the Nigerian Navy Order 08/17 promulgated the establishment of the college, to develop senior naval leaders and equivalents from other services as operational level commanders with thorough appreciation of national security problems, who are prepared to make sound decisions in the application of maritime force as a policy option.

The NWCN was commissioned on May 31, 2017 and the pioneer course of the college was inaugurated on July 21, 2017. Since its establishment, it has successfully graduated sets of participants of naval warfare course and also successfully conducted the Command Level Officer’s course for officers of the rank of Lieutenant Commander and Commander.
—