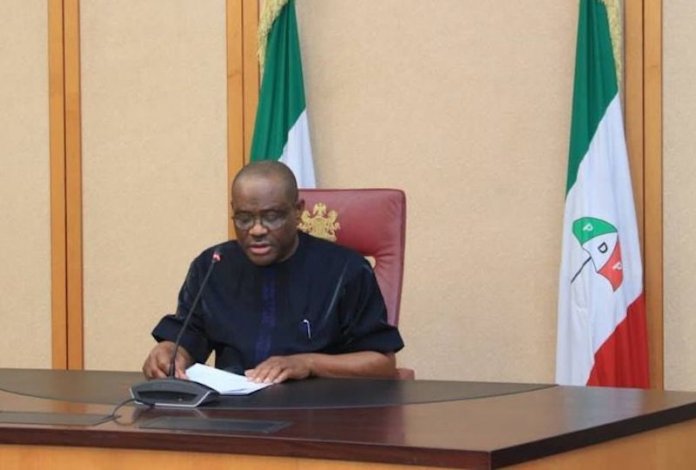 Rivers State Governor, Mr. Nyesom Wike, has imposed a 24-hour total curfew for two weeks on the entire area around the Okoro-Nu-Odo flyover in Rumuokoro area of Port Harcourt metropolis due to an upsurge of cult activities and related violence.

The governor has also warned that government would spare no efforts to deal appropriately with anyone who decides to disturb peace and security in the state with cult activities and associated violence and killings.

Wike, in a state-wide broadcast yesterday explained that the decision to impose the curfew was taken after the State Security Council meeting in Port Harcourt.

He explained that the state government was seriously disturbed by the recent upsurge of cult activities and related violence and killings around the adjoining areas of the Okoro-Nu-Odo flyover in Obio/Akpor Local Government Area.

“As part of measures to tackle this menace, therefore, government has imposed a 24-hour total curfew for two weeks on the entire area along and around the Okoro-nu-Odo flyover up to one-kilometre radius from Saint Emmanuel Anglican Church, Rumuokoro, extending to the Rumuodomaya Slaughter and local government area daily market with effect from Monday, November 23, 2020.

“Consequently, no form of trading, human or vehicular movement is allowed within the afore-mentioned restricted areas until further notice. Only staff and vehicles belonging to Julius Berger Nigeria Limited are exempted from the curfew and associated restrictions on movement so that construction work on the Okoro-Nu-Odu flyover is not stalled,” he said.

The governor directed security agencies to enforce strict compliance with the curfew and arrest and summarily prosecute any person, trader or vehicle that may attempt to violate the curfew.

“Again, we wish to warn that community leaders that allow cultism and related activities to thrive unabated in their communities would be treated as collaborators to the resulting crimes and dealt with accordingly.

“We urge all citizens to be part of the efforts to curb cultism in the State by reporting any suspicious cult activity, including gatherings and initiations in or around their neighbourhoods to the security agencies for immediate action,” he added”

He disclosed that the state government would construct the 7th flyover in Port Harcourt to traverse Ikokwu to Azikiwe Street in the Diobu area of the metropolis.

He appealed to residents of Port Harcourt and Obio-Akpor Local Government Areas to bear with the State government for traffic challenges that they may encounter in connection with the ongoing construction of the Oro-Abali and other flyovers.