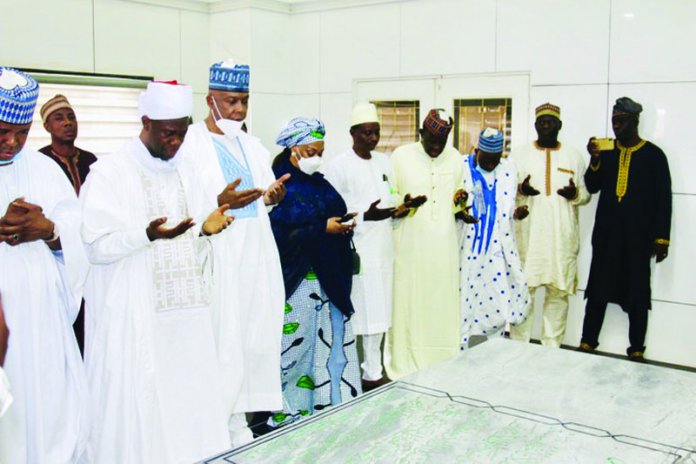 Beyond the eight years remembrance prayers for his father, Dr. Olusola Saraki, a recent visit to Ilorin, the Kwara State capital by a former President of the Senate, Dr. Bukola Saraki was a clear message to the opposition in the state, writes Hammed Shittu

The ancient town of Ilorin, Kwara State, was last weekend agog as the strongman of Kwara politics and former Senate President, Dr. Bukola Saraki, was received with pomp and celebration, right from the Ilorin International airport.
Saraki, who had been out of town for almost 18 months after he vacated office as the president of the eighth Senate in June 2019, was in town for the eight years remembrance prayers for his late father.

Meandering through the popular Garin Alimi area, Sawmill road and other communities leading to the Emir’s palace became a herculean task as supporters of the former Senate President crowded everywhere.
The adjoining streets of Ilofa GRA residence of the Saraki family were a beehive of activities, as crowd of supporters milled around to welcome their political leader back into town, dressed in customised T-shirts and caps, with such inscriptions as “Saraki we love”, “o su wa”, “ABS-Saraki”.

The rousing reception accorded Saraki, whose party, the Peoples Democratic Party (PDP) lost out in the 2019 general election in the state, according to THISDAY checks, might not be unconnected with alleged complaints of neglect by some people in the state since the current government assumed leadership.

But Saraki’s return to the town brought a sort of relieve to the residents, who see him as their messiah. This belief prompted many residents to join him from the airport to the Emir’s palace and finally to his country home at Ilofa road, GRA, Ilorin, where they also gave him support during the prayers for his late father.
Saraki and his supporters also visited the Emir of Ilorin, Alhaji Ibrahim Sulu-Gambari at his palace in Oja Oba to feciliate with him on the occasion of his 25th year anniversary on the throne.

Saraki and his entourage later moved in a motorcade to his residence, where his political associates and other well meaning Nigerians had waited for him to be part of the special prayers in memory of his late father. Some of the dignitaries present at the event included Saraki’s younger sister and Minister of State for Transportation, Senator Gbemisola Saraki; Senator Rafiu Ibrahim, the state chairman of the Peoples Democratic Party (PDP), Kola Shittu, former Acting national chairman of the PDP, Alhaji Abubakar Kawu Baraje and former speaker of the state House of Assembly, Dr. Ali Ahmad among others.

The Chief Imam of Ilorin, Sheikh Mohammed Bashir Solihu led the prayer session, supported by the Grand Mukadam of Ilorin, Sheikh Sulaiman Dan-Borno, Sheikh Saanu Sheu as well as Imam AbdulRazaq Aduagba.
The clerics, in their separate sermons, admonished parents to bequeath love, good moral and religious teachings to their children for them to benefit remembrance prayers from such responsible children.

Sheikh Bashir, said that late Saraki touched lives in all parts of the state and beyond through his philanthropic gestures, adding that the late politician lived an exemplary life now being emulated by his children.
The clerics said the Fidau prayer should be part of obligations of every responsible children to their late parents, because it attracts reward from God since it is what God loves and commanded.
Chief Mukadam of Ilorin, Sheikh Suleiman Dan-Borno, particularly, expressed gladness over the presence of both Senators Bukola and Gbemisola Saraki, at the event.

“We hold it that with your togetherness, love and unity, people will not see the secret of Ilorin. The late Olusola Saraki planted goodness, peace, prosperity, in all parts of the state. And people benefitted therefrom. We are assured that Saraki is happy in his grave with what is happening among the children and the people he left behind”, he said.

Imam AbdulRazaq Aduagba noted that the people of Kwara were happy with the children of the late political icon, because “Saraki is a symbol of love. “ The cleric urged people to discourage bad publicity against Dr. Bukola Saraki, saying that Allah has His ways of controlling affairs of life.

“We can all see the difference in what happened before and what’s happening now in the political situation of Kwara. Our people should, therefore, change their ways to love one another. Let’s forgive ourselves and accept God’s ways”, he admonished.
An attempt by some hoodlums to foment trouble along Ilofa road on the day the special prayer was immediately repelled by security operatives keeping watch over the area. This development, however, led to a blame game between the PDP and ruling All Progressives Congress (APC) in the state.

The PDP, in a statement issued in Ilorin and signed by the state Publicity Secretary, Hon.Tunde Ashaolu, alleged that, “It was the APC-led government in the state that sponsored some suspected hoodlums to disrupt and attack the invited guests that attended the remembrance special prayers organised for the late politician, Dr. Olusola Saraki at his Ilofa country home, Ilorin over the weekend by the immediate past Senate President, Dr. Bukola Saraki”.

The party noted that if not for the quick intervention of security operatives, the armed thugs would have succeeded with their evil mission and that more casualties would have been recorded.
“We wish to place it on record that the APC is responsible for the ugly and unfortunate incident that played today out at venue of the prayer session held in honour of the late political icon of Kwara, Dr Abubakar Olusola Saraki.

“Before today’s event, we saw on social media platforms leaked screenshots of a WhatsApp conversation, where an appointee of Governor Abdulrahman Abdulrazaq instructed some thugs to unleash attack and cause chaos at the venue of the programme.
“Acting on the instruction of the Governor’s aide, the armed hoodlums stormed the venue of the fidau prayer and attempted to disrupt the programme and attack innocent people.

“If not for the quick intervention of the security operatives, who were on ground, the armed thugs would have succeeded with their evil mission and more casualties would have been recorded. The APC was also rattled by the visit of the former Senate President, Dr. Abubakar Bukola Saraki and the rousing welcome he received on his arrival to Ilorin,” Ashaolu said.
But the APC in its statement signed by the state Publicity Secretary of the party, Alhaji Tajudeen Aro, accused the PDP and their leaders for the attack on security agencies and innocent residents of Ilorin during the event.

The party however warned the PDP against reintroduction of thuggery to the state politics.
“For the first time since Senator Bukola Saraki and his party were defeated during the last general election in the state, our state again on last Saturday recorded a sad reign of hoodlums at an event organised by the senator. This is sad and unacceptable.
“We have since 2019 put those ugly days of official patronage of hoodlums behind us as a state and it is of great concern that many people were injured as a result of the lawless conduct that happened during the event.

“For example, many innocent persons have been rushed to General Hospital after sustaining serious injuries from the reckless behaviour of his followers. We do not want such ugly development again in Kwara,” he said.
As the two parties traded tackles over the incident, the picture of a different circumstance, which almost coloured what really happened, broke out and it was a supremacy battle between two rival cults in the state.

THISDAY checks revealed that the violence coincidentally occurred at a spacious mechanic shop around Commissioner Way, GRA, Ilorin, where a suspected cultist, apparently tipsy, who came to drink at one of the pubs in the area was said to be shooting a pump rifle into the air, causing panic in the area.

The onlookers reportedly cautioned him but he was unperturbed, saying he was testing his newly bought rifle, which he described as one in town. It was, however, learnt that the fear that the cultist might wreak havoc on people in the area prompted security operatives, who were watching the incident some meters away to contain the situation.

The suspected cultist was later found to be on the wanted list of the police for allegedly committing many atrocities in the state capital. He reportedly fired some gunshots at the approaching team of police officers in a vehicle but he was shot dead in an exchange of gunshots with them. When Contacted, the spokesperson of Kwara State police Command, Ajayi Okasanmi, confirmed the incident but said he had not been officially briefed. “I heard about the incident, but I have not been officially briefed,” he said.

However, Saraki’s press officer on local matters, Hon. Abdulganiyu Abdulquadir, was quick to distant the incident from the programme of 8th year memorial prayer for the late Saraki, which successfully took place some meters away.
Abdulquadri, in a statement in Ilorin, said, among others things that, “The incident has nothing to do with the prayers. To avoid any misrepresentation of facts, we urge all news men interested in publishing the facts to seek clarifications from the police and other security agencies as investigation into the matter is said to have commenced.”

In the final analysis, despite the move to disrupt the 8th year remembrance special prayer for the late “Oloye”, the event recorded a huge success as thousands of political associates and supporters of the late politician attended the event without any hindrance.

The event also served as a uniting factor for the Saraki family as Bukola and his sister, Gbemisola sat together to offer prayer for their late father. Apart from this, the event also showed the unalloyed support for the Saraki political leadership in view of the love showed to him by his teeming supporters and associates that came out to welcome him back home after months outside the ancient town of Ilorin.