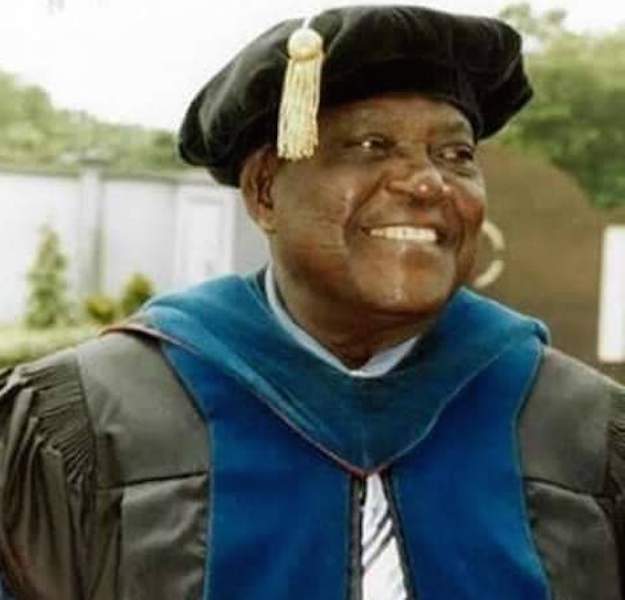 I am truly honored and humbled to be given this grace and privilege to deliver an eulogy at the funeral of a man who when I was growing up on the street of Aawe town, I only knew by reputation as a hero and light bearer for Aawe people

There are different ways to measure the greatness of a man’s impact. One would be his legacy as an institution builder and reformer. Another would be the shaping power of a man’s ideas and intellect

Another would be the methodological and stylistic impact of his written words. Yet another would be the incalculable eternal difference of a man in being the human instrument in God’s hand, in bringing hundreds of thousands of people out of darkness into light

… out of Satan’s authority into God’s family; out of condemnation into forgiveness; and out of sin into holiness … I mean, out of hell into everlasting joy with God

While only God can rightly assess the ripple effect of a person’s life in all the ways it has influence, but if as a child of God I could offer an opinion, it would be this, that papa Rev. (Dr.) S. T. Ola Akande – father, husband, emeritus minister of the gospel, teacher, author, educationist, die-hard Baptist and Nigerian statesman …

And that is why, when I wrote about papa on his 93rd birthday, precisely last year, I stated how distinctly honored I was to celebrate an embodied legacy divinely scripted and delivered to the world by the Almighty

It is indeed that divinely scripted legacy that has called to everyone of us gathered here today. And as we bid Baba “good night”, I dare say with the force of conviction that in the Church of God in Nigeria, with the passage of Rev. Akande, an epic era of evangelical history has come to an end

Here lay a supremely gifted preacher of the gospel; a man of deep conviction whose passionate heartbeat throughout his missionary journey in this part of existence was for the gospel of our Lord Jesus Christ

Though we still mourn papa even as he fulfilled his years; even as he was not only absolutely prepared for this last journey, but was unreservedly sure of where he was going. I however say with boldness that papa has heard, loud and clear, those words that welcome saints in glory … “well done, good and faithful servant”

All that I have said so far merely recast in more prose many titles that people had called papa, including the most popular, “the Archbishop of the Baptist Church in Nigeria”. All these recognitions and accolades he wore with grace while he was still in office, as:

o At Ebenezer Baptist Church on Campbell Street, Lagos Island from 1966 to 1969

o As associate professor, Nigerian Theological Seminary, Ogbomoso, from 1973 to 1976

o And as pastor here at the Orita Mefa Baptist Church, Ibadan from where he moved to

o And as General Secretary for 12 years

Born in Aawe on March 31, 1926 to late papa Daniel Oladele Akande of Ile Onsa-Lapeleke of Awe. His mother was mama Susannah Ayannihun. Few years before Papa was born, his parents had migrated to the then Gold Coast, now the Republic of Ghana

Significantly, divine providence decree that the initial seeds of papa’s calling will be sown when he was a teacher in the Baptist mission in Ghana. This being the origin of papa’s Fante accent which adorned his impeccable Queen’s English

The same divine providence would direct papa’s feet to mama Comfort Olalonpe Kehinde, originally from Ogbomoso, (but who had since become, flesh and blood, an Aawe daughter, who cannot do without eating Oku’Adie on any good day). Papa met and fell in love mama Olalonpe in Ghana in 1949.

Their union remains a classic marriage of its kind. And papa would testify even in his last days that what his life would have been like without a better-half like mama Olalonpe was simply unimaginable

The marriage will be blessed with five children and five grandchildren:

o A. Bola Akande, City Administrator for the City of Brentwood, Missouri, U.S.A.;

With Baba Akande’s forceful and mesmerizing sermons and homiletic skills, Orita Mefa Baptist Church became the very place to be to hear the Word of God through the oratorical mouth of Baba. Indeed, sitting at the feet of Baba Akande to hear the word was a significant “elective” for me personally, all through my undergraduate and postgraduate days at the University of Ibadan.

Baba Akande drank too much drink from the love, favour and mercy of the Lord to hold back the fiery message of the Gospel he carried all his life. There is a poignant example in Baba’s pastoral ministry. One of the ecclesiastical issues he would be forced to deal with is the case of the dismissed members of the Ogboni Fraternity in the Baptist Churches he pastored.

Baba overturned the dismissal decisions of Ogboni Fraternity and recalled the members that were dismissed. For him, the love of God demanded that love was commended to us all, that even when we were and are in sin, Christ loved and loves us.

His decision was vindicated when those recalled abandoned the Ogboni and turned to Christ. And that became a significant dimension of his messages—dedication to the Lord Jesus is more eternally significant than membership of any and all secret societies.

And Baba was fiery and forceful and undaunted about this. Baba did not hold back; he could not have held back because the one in him was greater than all the powers of darkness combined!

Baba, in all senses, brings to mind the persona of another Baptist minister, the Reverend Martin Luther King, Jr. both of them attest to the robust Baptist framework of scholarship and learning. Baba Akande’s training in theology and deep scholarship enabled him to tap into the spirit of the reformer like Martin Luther King …

And it was the same combination of erudition, vision and selfless service that motivated him to stand as a presidential candidate in Nigeria. All through his active life, Baba was always single-mindedly seeking for opportunity to make a difference. Nigeria, the place of his birth and ministry, was not different.

In all: as we all sit here beholding the remains of Baba Samuel Titilola Oladele Akande, there is one abiding message that Baba’s life has scripted for all of us. Baba’s charge was to use the Nigerian Baptist Convention as a reform platform to bring the hearts and minds of the people of God back to the paths of higher values and purposes—that could serve as a barometer with which the spiritual and social health of the society is measured—rather than the present suffusion of prosperity message and miracle mentality that define a significant aspect of Christianity.

There is no doubt whatsoever that Baba’s place in eternity is assured. He has finished his fight and ended the race. For those of us he left behind, we have the responsibility to keep asking about what would be said of us at the end of our lives’ sojourn.

May the gentle soul of our beloved father, mentor and statesman continue to rest in peace.

I thank you all for your kind attemtion.

Tech Experts, Others to Lead Discussion at Photo Journalists Confab