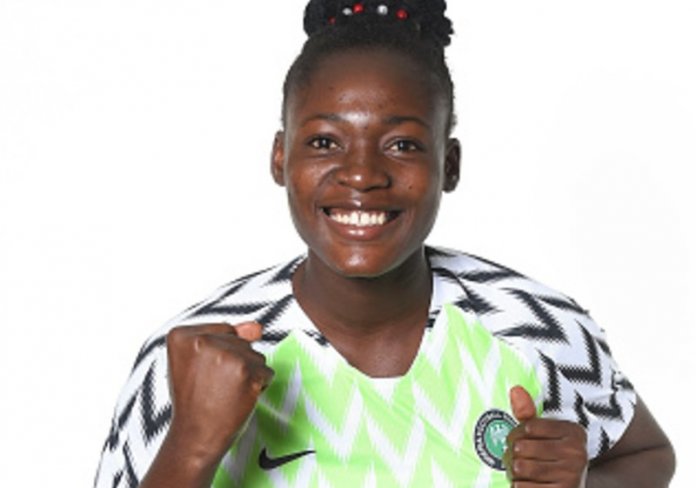 The 2018 Swedish champions Pitea have completed the signing of Nigeria striker Anam Imo, on a three-year contract after passing her medical.

Pitea based outfit secured the Super Falcons star as a free agent after successfully seeing out her two-year contract with 2019 Swedish Damallsvenskan winners Rosengard this November.

The 20-year-old’s move to Pitea extends her impressive budding career in Sweden, where she had been since 2018 after leaving Nigeria Women’s Premier League side Nasarawa Amazons.

During her spell at Malmo IP, the Nigerian was influential in her side’s title success in 2019 and runners-up finish in the 2020 season, scoring 10 goals in 40 outings for Jonas Eidevall’s team.
Having completed her move, the striker becomes the first signing ahead of 2021 Damallsvenskan season for coach Stellan Carlsson.

“The first new acquisition for the 2021 season to Pitea IF DFF is ready,” the club website announced on Thursday evening.
“It is 20-year-old forward Anam Imo from FC Rosengard who signed a three-year contract with the club.
“She is welcome to the club and a more detailed presentation will come later.”

The signing of Imo explains the ambition of Carlsson to help the 2018 Damallsvenskan winners improve on last season’s form after a long battle to beat relegation from the top-flight.

Following her switch, Imo will become the second Nigerian with the Swedish outfit after veteran Super Falcons defender Faith Micheal.

Before her first move abroad, she scored eight goals for Nasarawa to emerge as 2018 women’s top-flight topscorer and was named the Nigeria’s Young Female Player of the Year same year.

At 18, she also put up a fine display as Nigeria recorded a title success at the 2018 Africa Women’s Cup of Nations in Ghana.
Imo will aim to continue her career at LF Arena when Pitea launch their Swedish league campaign in 2021.