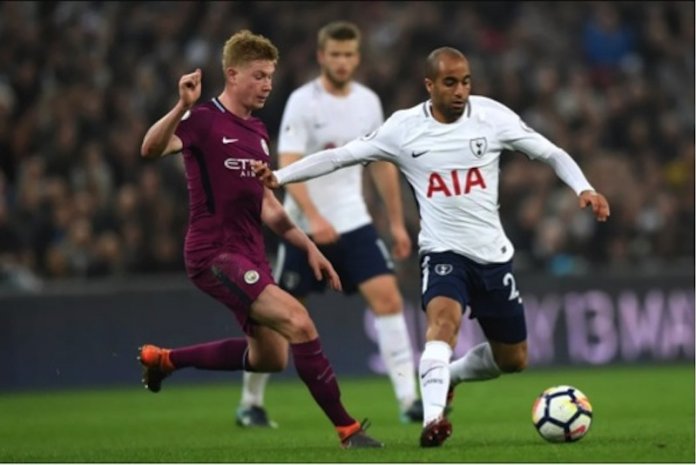 After a two-week interlude due to international break, club football returns with the Premier League fixtures pitching two of the most successful coaches against each other. Jose Mourinho welcomes arch rival Pep Guardiola to the Tottenham Stadium. While Spurs sit second in the table, Manchester City are experiencing their worst time in five years after a stuttering start to the season. However, a win against Tottenham will put their Premier League season back on track, but against a Mourinho side, it will definitely be a high mountain to climb

Old rivals Mourinho and Guardiola renew hostilities today when Tottenham Hotspur welcome Manchester City to North London in the headline fixture of this weekend’s Premier League.
For the first time since January 2017, Spurs go into a showdown with Man City sitting above their opponents in the table, and victory would lift them to the very top until at least Sunday night.

Matches with Mourinho and Guardiola in opposing dugouts almost demand that as much attention be focused on the managers as the clubs, and for Guardiola in particular he will be looking to crown a celebratory week which saw him finally put pen to paper on a new two-year contract at the Etihad Stadium on Thursday.

Arguably the two highest-profile managers in football have faced off in Clasicos and Manchester derbies before, with Guardiola enjoying the better of their past meetings.

Indeed, Mourinho’s 10 defeats to Guardiola-led teams are more than he has suffered against any other manager, while Guardiola himself has only beaten Manuel Pellegrini more often as an opposing boss.
The dynamics may be a little different heading into today’s showdown, though, with Tottenham flying high and belief beginning to grow that they could launch a genuine title challenge this season – just one year after finishing 40 points off the pace.

There is still a long way to go, of course, but the signs were promising before the international break, with Spurs embarking on the longest current unbeaten run in the league and picking up 17 points from the 21 on offer in that time.
Another victory this weekend would secure four league wins on the bounce for the first time since February 2019, while their only setback in their last 14 outings across all competitions came away to Antwerp in the Europa League last month.

If there is a concern for Spurs right now it may come in the fact that only two of their Premier League matches this season have been decided by more than one goal, and their last three have seen them only scrape past Burnley, Brighton & Hove Albion and West Bromwich Albion.

Mourinho’s men have still picked up nine points from nine in those games, though, while they head into this weekend boasting the joint-best defensive record, the joint-best goal difference and the joint second-best attacking record in the division.

Even so, Mourinho may still be demanding an improvement from his side, whose relatively kind fixture list since the October international break has now well and truly ended.

Six of Tottenham’s next seven league games come against teams that finished in the top eight last season – Man City, Chelsea, Arsenal, Liverpool, Leicester City and Wolverhampton Wanderers – while they must also play three Europa League games and an EFL Cup quarter-final in that spell.

Tottenham’s true title credentials may be a lot clearer by Christmas, then, and by that stage, Man City will hope to have hauled themselves back into the front-running of that conversation too.
Guardiola’s side have only won three of their seven outings so far this season, dropping nine of the 21 points available to them to find themselves 10th in the table.

However, City do still boast a game in hand over most of the other teams in the league and are only six points off pace-setters Leicester, so they certainly have the scope to make up for their uncharacteristically sluggish start.
A 1-1 draw at home to champions Liverpool last time out was the third time they have shared the spoils in their last five Premier League games – as many as their previous 70 outings in the competition.

City’s struggles to turn those draws into wins can be directly correlated to their relative lack of goals this season, having found the back of the net only 10 times in their seven league games.
To put that into context, City had plundered 27 goals by the same stage of last season, and their current tally is their lowest after seven games since 2010-11.

Guardiola’s men have failed to score more than once in each of their last five Premier League games, having netted 16 times in their previous five before that.
It should be noted that City have not completely dried up in front of goal – their tally of nine goals in three Champions League games is bettered by only two other clubs, for example – but their Premier League profligacy will be a growing concern.

Guardiola may subsequently be hoping that his players carry their international form into domestic duties, having seen Ferran Torres score a hat-trick for Spain against Germany, Rodri also get on the scoresheet in that match and Ruben Dias net twice for Portugal against Croatia.

However it comes, Guardiola will know the importance of returning to winning ways this weekend, whereas victory for Spurs would be another statement of intent in what supporters increasingly hope could be a memorable campaign.