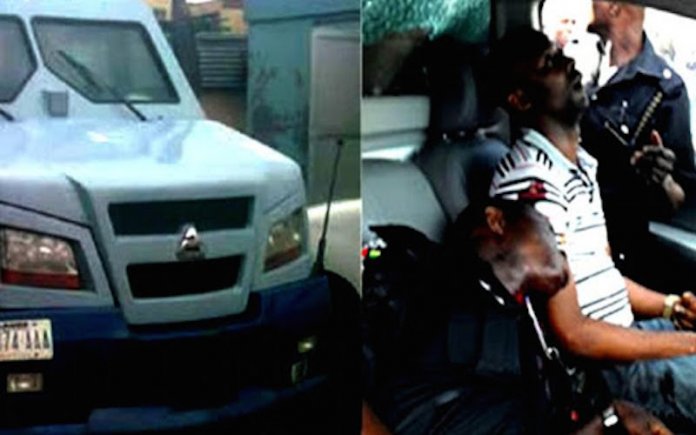 A bullion van belonging to a new generation bank in Lagos was yesterday evening hijacked by dare-devil armed robbers and the huge sum of money in it carted away.

This is coming as a former Inspector-General of Police (IG), Tafa Balogun, has appealed to officers and men of the Nigeria Police Force to return to their statutory duties after they were displaced from their stations during the #EndSARS protests.

In what looked like a premeditated attack, the robbers were said to have trailed the bullion van from the cash collection point till it got to a lonely road in Ado, Ajah, Eti-Osa Local Government Area of the state.

On approaching the bullion van, the robbers were said to have opened fire at the occupants, targeting the tyres to force the vehicle to a halt.

Although the few people on the road scampered to safety once they heard the gunshots, a stray bullet reportedly hit a commercial motorcyclist, killing him on the spot.

Attempt to match the firing power of the robbers proved abortive as they overpowered the driver and Spy policeman, who accompanied the bullion van.

According to eyewitnesses, the attack lasted for several minutes with no back-up in sight due to the continued absence of policemen from their duty posts.

Aside from vandalising the bullion van, the robbers also attacked a water tanker, injuring the driver and conductor.

Confirming the attack, the state Commissioner of Police, Hakeem Odumosu, however said no life was lost.

Meanwhile, a former IG, Balogun, has appealed to officers and men of the Nigeria Police Force to return to their statutory duties after they were displaced from their stations during the #EndSARS protests.

In a statement issued yesterday, the ex-IG said: “I urge all members of the Nigeria Police in our country to return to their duty posts and continue to provide the much-needed security to our dear country, Nigeria; not minding the recent brutal attacks, arson, and acts of intimidation against the Police.

“The Nigeria Police remain the first line of internal security as guaranteed by the Nigerian Constitution. Therefore, it behoves all and sundry not to betray the spirit of the Constitution.

“I sincerely appeal and urge all my brothers and sisters in the Police Force to put the past behind us as the federal and state governments, as well as the police authorities, are positively and aggressively addressing the unprecedented provocative attacks on the police institution. We all love you.

“Please, once again, I appeal to all of you to return to duty without further delay.”