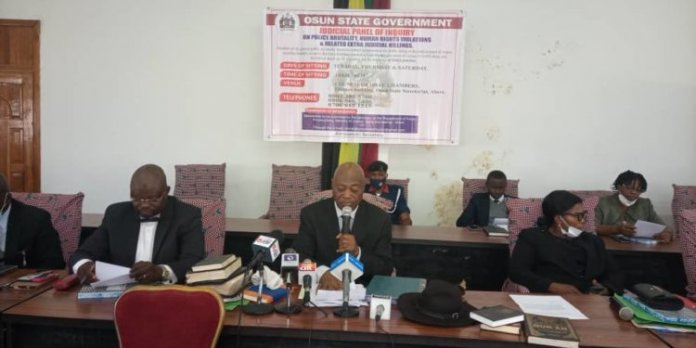 The Osun State Judicial Panel of Inquiry on Police Brutality, Human Rights Violations and Related Extra-Judicial Killings yesterday commenced hearing on the various petitions and submissions brought before it by members of the public.

The panel began the hearing with five different petitions submitted by victims of police brutality and other human rights violations.

The state Governor, Adegboyega Oyetola, had on October 22, 2020, inaugurated a 13-man panel with a mandate to unravel all matters relating to police brutality, disbanded officers and men of the Special Anti-Robbery Squad (SARS) among other related cases.

According to the state government, the panel has six months to entertain and complete all the findings, investigations and cases filed before it.

Delivering his inaugural sitting speech at the Council of Obas’ Chamber, Finance Building at the Government Secretariat in Osogbo, the Chairman of the panel, Justice Akin Oladimeji (rtd), said the panel had since its inauguration received five petitions and submissions from members of the public.

He noted that the panel was fully prepared to deliver the statutory mandate conferred on it to ensure justice, fairness and equity in all the cases before it.

The retired High Court Judge, who said the mandate of the panel was to investigate the brutality of the defunct Special Anti-Robbery Squad (SARS) against some members of the public, said the panel would not act as a regular court of law where law is strictly applied to cases; rather, it would function as a fact-finding panel.

“This panel is not a regular court of law where law is strictly applied to cases, rather, it is a fact-finding panel. Therefore, it is the duty of every petitioner, and in fact, all parties who present petitions and defence before this panel to bring all facts and evidence in support of their cases before the panel.

“We are neither prophets nor seers that can see what the ordinary eyes cannot see. Every petitioner, who has suffered injury or loss, wants damages or compensation to be paid to him. This panel is empowered to make recommendation on award of such damages or compensation, but we cannot do so unless you come and demonstrate to us how and where you sustained injury or loss.

“It is the fact and evidence that you place before us that we must use to assess the injury victims have suffered in the hands of SARS in each of the cases, and the damages claimed by the petitioners or any other party as the case may be.

“These are the things that will assist us in our duties, so that we will not therefore appear to be awarding arbitrarily low or high damages or compensation in the eye of the reasonable man,” he added.

The chairman of the panel urged the petitioners to be truthful and honest in whatever they bring before the panel, noting that the panel could only work on empirical facts.

“In presenting your cases before this panel, we urge the parties and their witnesses to be truthful and honest, as righteousness exalts not only the individual but also the nation, and the world at large.

“We are your fathers, mothers, brothers, sisters, children and friends; do not be afraid to come and tell us your stories. If you do not want to be heard in public, we shall make arrangement to hear you without the public,” he stated.