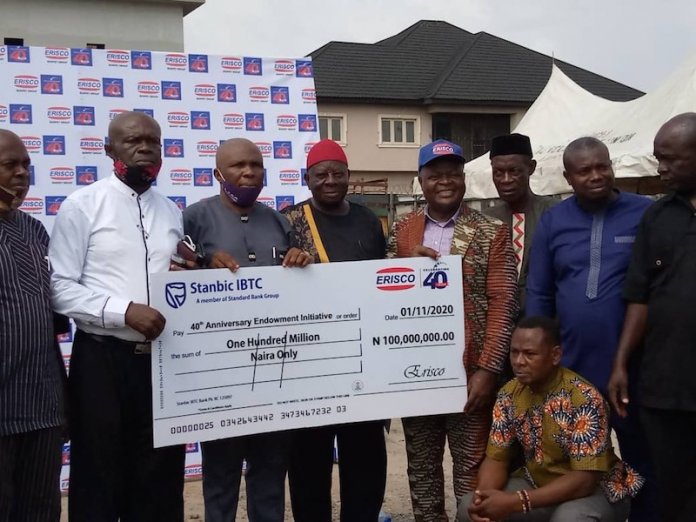 It was double celebration as one of Nigeria’s foremost indigenous company; Erisco Bonpet Group transformed 51 Nigerians into instant millionaires to mark its ruby jubilee anniversary alongside one of its subsidiary, Erisco Food Limited, makers of Ric-Giko tomato paste.

To mark such a milestone, President and Chief Executive Officer, Mr. Eric Umeofia doled out N100 million in the first phase of his empowerment initiative aimed at lifting members of his community, Amichi in Nnewi South Local Government of Anambra State.

Over 51 people were made instant millionaires through an open selection process, which sought to lift over 1000 Amichi indigenes from poverty with cash prices ranging from N50,000 – N100,000, while scholarship packages up to tertiary institutions were given out to over 100 youths.

Erisco Foods Limited, the manufacturers of Ric-Giko, Nagiko and other Erisco brands of tomato paste and other food products with an installed production capacity of 450,000MT of tomato paste per annum making it the largest tomato paste producer in Nigeria and the fourth largest in the world with over 2,000 direct workers, also donated food items valued at N100 million to the Nigerian Military and Internally Displaced Persons in various camps across the country.

They also made donations to the governments of Anambra and Lagos States during the COVID-19 pandemic as part of the company’s effort to alleviate the plight of Nigerians in both states.

It was made known that about 39 fire fighting vehicles were donated by the parent company to all states of the federation with Lagos and the FCT having an additional truck each.

After suffering setbacks that almost saw the company moving its operation outside Nigeria in 2017, that act was rescinded after the government pledged to create a level playing ground for all stakeholders in the tomato industry.

Since then, Erisco Food Limited currently has ongoing expansion projects in Nassarawa, Kastina and Jigawa States, making it a force in the tomato industry.

The company became the first in Africa to develop and use state of the art technology of processing both fresh and dried tomatoes into paste, which is by far more healthy and nutritious than most imported products, after years of research.

“I try to make people comfortable, no matter the circumstances they find themselves, people should not reject themselves because when they do, there is no hope again.

“We want to restore back hope to humanity, we just started this empowerment initiative from my community and this 40 year milestone will be celebrated even into the New Year.

“I implore other well to do Nigerians like myself to join hands help rescue our nation, as the president can only do his best and the rest falls on us.

“We can start by patronising only ‘Made in Nigeria’ products as it is often said ‘Charity begins at home’, and help boost the country’s economy”, Umeofia said.

He added, “I started with the N100 million empowerment initiative, focusing on my community, but we have plans to make sure that before we conclude on the activities marking our 40th Anniversary, we would reveal other empowerment plans that will hit all local governments in Nigeria.

” This program did not just start and would not end anytime soon. Our idea is to use this program to help reduce poverty, armed robbery in line with President Buhari’s aim to lift 100 million Nigerians out of poverty in the next 10 years and Erisco is playing its part to achieve that feat”.

Mrs Paulina Anaebue (aka Mama Office), one of the beneficiaries, who was ecstatic as she received one million Naira told THISDAY that she intends to put her prize money into her rice business to help it grow.

In his comment, the Chairman Amichi Development Union Lagos Branch, Mr. Kenneth Nwodike, commended Umeofia, saying: I am very happy this is happening during my tenure because to assist people in this chronic period would go a long way to put smiles on people’s faces”.