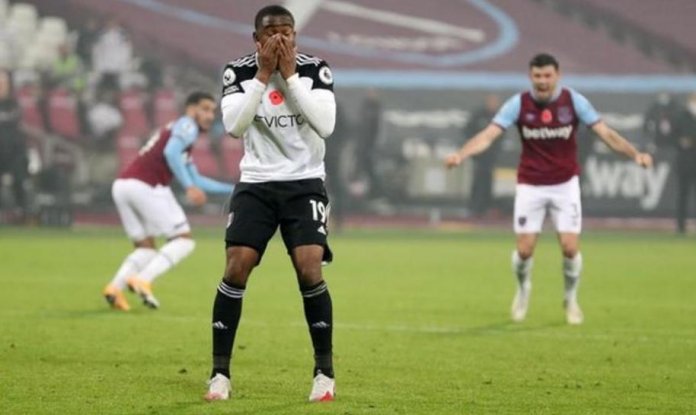 The 23-year-old Nigerian player had the chance to earn Fulham a last-gasp point at West Ham United on Saturday night but his spot-kick, in the eighth minute of stoppage time, was a horror show that left his manager Scott Parker seething.

Attempting the ‘Panenka’ chip made famous by Czech player Antonin Panenka and imitated by the likes of Italian maestro Andrea Pirlo, Lookman got it all wrong.

He appeared to kick the ground before contact and his effort spooned up weakly into the grateful arms of Lukasz Fabianski.

“After yesterday (Saturday’s) mistake, I take full responsibility and onus for it,” Lookman tweeted on Sunday. “To my teammates, manager and the supporters I vow to put the next one in. I will not let one failure hold me back.”

Understandably, Cottagers boss Scott Parker was not best pleased after the match, having seen his team fail to rescue a point having conceded a Tomas Soucek strike in the 91st minute.

“I’m not going to shirk away from the penalty miss, I’m angry, and he (Lookman) is as well. You just can’t miss a penalty like that. If you take one like that, you have to score,” Parker said.

“He’s disappointed and rightly so. Everyone can miss penalties of course but in a certain way. This is football, growing as an individual and we’ll learn from this.”

Parker was also disappointed that Tomas Soucek’s stoppage-time goal for West Ham had not been ruled offside.

(Sebastien) Haller was clearly offside and was interfering,” Parker, whose side have lost six of their eight games in the Premier League, said. “I’d have liked to have thought the linesman or the VAR could see it as interfering.”

Lookman also received sympathy from team mate Tom Cairney, who won the penalty, and even West Ham midfielder Declan Rice, but Parker could not hide his feelings after the howler that condemned his side to a 1-0 defeat in a game in which they deserved a point.

Parker’s opposite number David Moyes was relieved that his side had earned a first win in four games without playing well.

“It says a lot about the players. We are going to stick at game, if we have to win ugly — not that we were too ugly — but the last 20 we tried,” Moyes said.

“I was furious with the way we played after we scored the goal. We had to manage the game better and we didn’t do which led to a penalty kick, which was disappointing.”