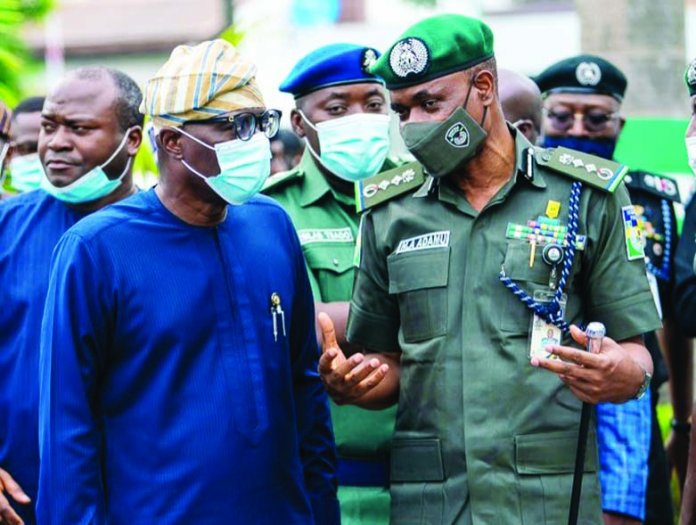 While the reprehensible killings of policemen and destruction of related assets trailing the #EndSARS protests accentuate the absurdity of operating a centralised police force in a presumptive federation, it’s nevertheless time the force’s officers and men returned to their beats, writes Louis Achi

Looking at the big picture, much of the crises roiling the nation today have critical linkages to the state failure thesis of the ungoverned space. According to the Rand Corporation, ungoverned territories can be failed or failing states, poorly controlled land or maritime borders or airspace, or areas within otherwise viable states, where the central or state government’s authority does not extend.

Political scientists tend to invariably equate ungoverned areas with security threat, given its other various implications. A more inclusive definition of ungoverned territory by the US Department of Defense, albeit one still influenced strongly by the state failure thesis, holds it is a place where the state or central government is unable or unwilling to extend control, effectively govern, or influence the local population due to inadequate governance capacity, insufficient political will, gaps in legitimacy, the presence of conflict, or restrictive norms of behaviour.
Debatably, “inadequate governance capacity, insufficient political will, gaps in legitimacy and the presence of conflict” take the cake in succinctly capturing the Nigerian quandary.

The calamitous failure of the Special Armed Robbery Squad, SARS, which triggered the angry EndSARS protest, itself, has undeniable linkage to abdication of governance or collusion by top-echelon command of the Nigeria Police.
The consequence became the extremely bloody and extortionist reign of the squad with the inevitable backlash of the youth revolt and loss of lives, limbs and property – including those of the police.

Cut to the bone, beyond threats that emerge from the absence of governance, significant dangers can also be spawned from the way a place is governed. Much of what played out in the last one month fed fundamentally from the subsisting quirky governance templates.

Significantly, the directive by the National Economic Council (NEC), hugely influenced by the intensity of the EndSARS youth protests, that state governments set up judicial panels of inquiry to handle complaints against the disbanded SARS has been observed by many states, including the Federal Capital Territory, Abuja. Since the panels set sail, numbing stories of defunct SARS-related infamy has been the order of the day.

But a very worrying and serious dimension to the recent events in the national space is dominating the news. In the face of the post-protests anti-police offensives by miscreants and hoodlums, which resulted in much loss of police lives and destruction of their assets, the police are unwilling to return to their beats. At press time, crime is spiraling in various states as the police have stayed away in self-preservation.

THISDAY recalls that many serving officers and men of the police have deserted their work in the aftermath of the #EndSARS protests in many parts of Nigeria after hoodlums seized the vacuum and attacked critical police infrastructure and other public and private structures.

The absence of police personnel and other security operatives in crucial spaces including some highways in the country have made the citizens vulnerable to attacks.
In Nasarawa State, in North Central region, armed robbers now trail bank customers and snatch money from them as soon as they come out from banks, especially in Lafia, the state capital.

Reports have it that the Benin-Auchi road is now a tough route as armed robbers constantly block the road, robbing passengers and drivers’ belongings. This scenario is being widely replicated.
Governor Ifeanyi Uguanyi of Enugu State and Governor Godwin Obaseki have respectively implored the police to return to their duty posts in the interest of the people, pledging to rebuild the burnt stations in the state. Many other stakeholders are following suit.

Ministers from the Southwest, last week, also urged the federal government to restore confidence in the police to boost their morale and improve their welfare and this is the way to go, from emerging consensus.
The wellbeing of the police is a very important dimension in the administration of the force personnel. Policing models in much of the developed jurisdictions attest to this.

In the aftermath of the #EndSARS nationwide demonstrations, the Inspector General of Police, IGP, Mohammed Adamu, who revealed that 22 police personnel were killed across the country, penultimate Friday, directed men of the Nigeria Police Force, to, henceforth, protect themselves against any attack by hoodlums.

Speaking, while on an on-the-spot assessment of the security situation in Abuja, Adamu stated that, “If anybody touches or assaults you, you can also protect yourself.” But despite the IGP’s marching order, THISDAY gathered many of the Force’s personnel were still leery about returning to their duty posts, especially in volatile areas in some states.
On its part, the Police Service Commission, PSC, has revealed it would not force the security personnel to return to work after the recent attack on them and their facilities.

While denying a report that the commission would dismiss any police officer, who failed to return to work, its spokesperson Ikechukwu Ani, said the agency had condemned the killing of security personnel on legitimate duties and had warned that any attempt to make the country lawless would be an ill-wind that would blow nobody any good.

“The commission will continue to do its best to ensure the police is motivated to do its job. The commission, being the employers of the Police, is pained that Policemen were killed and stations set ablaze throughout the country. It will be very insensitive at this point for anyone to say that the commission will dismiss any policeman, who didn’t return to work,” Ani stated in an official statement.

The police – and not soldiers – typically are responsible for maintaining public order and safety, enforcing the law, and preventing, detecting, and investigating criminal activities.
Given that states’ efforts to incept parallel policing are constitutionally hobbled, with the looming end of year activities, Christmas and beyond, further delays by the police in returning to their beats will spell genuine disaster.
Arguably, the police are now the beautiful bride – and with good reason.