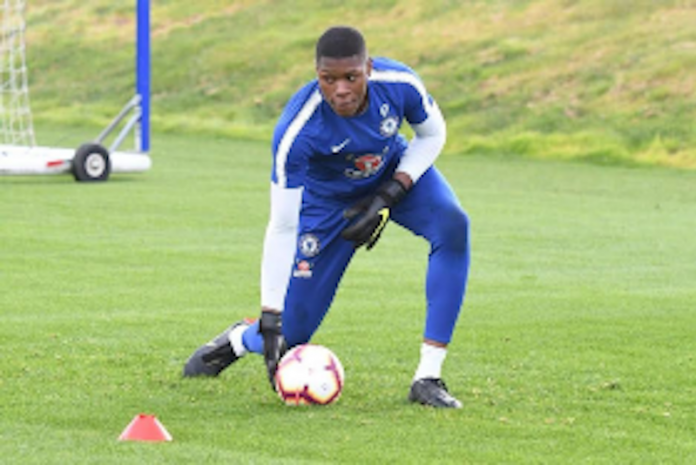 Since US ’94, the Super Eagles of Nigeria have never been blessed with a young crop of players as it presently boasts of. In spite of the array of stars at its disposal, one area is still a cause for concern- the goalkeeping department. However, with the rising in stature of Chelsea 17-year-old Prince Adegoke, who just signed a new contract at Stamford Bridge, the problem at the goalpost may not last long

Nigerian youngster Prince Adegoke has penned a new deal with Chelsea.
This comes only a few months after the 17-year-old signed a scholarship with the English giants. Having turned 17 on Tuesday, Adegoke has now seen a clause in his contract activated.

The official announcement was expected to take place on Tuesday. However, owing to the team’s European commitments, it was pushed to Thursday.
Chelsea have struggled with the goalkeeping position, Adegoke will now put pen to paper on a deal that lasts for two years and eight months. There is also an option to increase the contract in July 2021, based on his performances for the club.

Born in England, Adegoke originally signed for the club as a 13-year-old. A goalkeeper, he has been a part of the full-time school programme at the academy.
A tall player, the 17-year-old has a big presence on the pitch. He featured on the bench in the FA Youth Cup last season and has been involved with the U-18s occasionally.
A talented keeper, he joins the ranks of the talented youth coming through the ranks at Chelsea.

While he is some way away from making it to the first-team, he is on the right track in terms of growth.
The young Nigerian goalkeeper enjoyed a major breakthrough earlier in May in his bid to make his debut for Chelsea U-18s after making their 16-man squad for their final game of the season against Arsenal.

With Chelsea winning the national title after beating Manchester United 3-0, manager Jody Morris brought a very youthful team to the Cobham Training Centre and named Adekoge among his five substitutes.
However, the young goalkeeper was one of the two Chelsea players that remained on the bench for the entirety of the game.

Prince Adegoke was snapped up by Chelsea in April 2016 after he was spotted playing for the U-12 team of Kent County Division 1 West club Club Langley FC.
Earlier this year, the Londoners announced the new intake some of whom have been at the club for more than eight years while others are players signed from abroad.
Jim Fraser Chelsea’s assistant head of youth development described the player as talented and versatile.

He also described Prince Adegoke who signed for the locally as U-13 as “A very tall and big presence on the pitch, he featured on the bench in the FA Youth Cup last season and has been involved with the Under-18s on a number of occasions.
“Prince has been part of the full-time school programme at the Academy.”
Adegoke is on the radar of several Premier League clubs including Arsenal and Wolverhampton Wonderers.

If Chelsea decide to let Adegoke leave, he will not be short of potential suitors. Arsenal, Bournemouth and Wolverhampton Wanderers are all keen on the Nigerian goalkeeper.
Adegoke will have a decision to make if Chelsea allow him to move on at the end of the season. Joining Arsenal would be the local option while Bournemouth and Wolves moves would mean relocating.

Adegoke is supposedly highly-rated by Chelsea. He will be hoping to continue his development at Chelsea if he is made an academy scholar in 2020/21.
If not, there are other options as he takes his next career step. Arsenal have James Hillson but he might move up to the U-23s next season. So Adegoke would be competing with youngsters Arthur Okonkwo and Tom Smith.

Bournemouth have already shown that there is a path to the first-team for goalkeepers with Mark Travers and Aaron Ramsdale getting senior game time. Wolves are building a strong academy so this would also be an exciting project.

Meanwhile, Adegoke and Nigeria-eligible goalkeeper Kelechi Chibueze will be competing to be Chelsea U-18s first-choice goalkeeper for the 2020-2021 campaign and will be observed at close quarters by manager Ed Brand when pre-season preparations begin in the coming weeks.

While Chibueze has represented England at U-15 and U-16 level, Adegoke, who was The Blues U-16s number 1 last term, was invited to train with the Nigeria U-17 squad in 2019.
The Golden Eaglets invitee’s scholarship deal will be automatically upgraded to a professional contract when he turns 17 in November 2020.