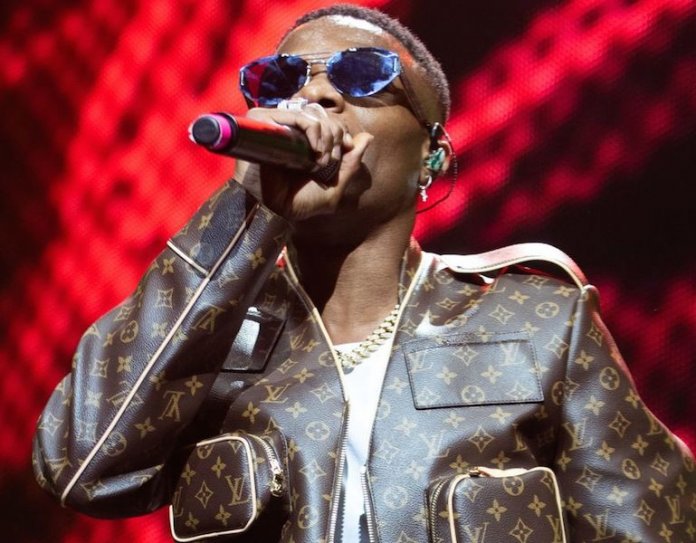 After teasing fans with the release of his fourth studio album for months, Nigeria’s popular Afro-pop artiste Ayodeji Ibrahim Balogun, popularly known as Wizkid finally released ‘Made in Lagos’ to streaming platforms on Thursday, October 29.

The project’s initial release date was delayed as a show of solidarity with Nigerian youths who protested police brutality at the hands of the scrapped Special Anti-Robbery Squad (SARS), a specialist unit of the Nigerian Police. The 14-track album was dedicated to every Nigerian citizen.

Projecting his support, Wizkid dons a ring emblazoned with the Nigerian flag on the album’s cover. What the cover art also reveals is the sonic textures that describe the body of work. Opting for beige (desert sand), the singer poses with his head tilted to one side, and palm placed on his face. His fashion choice was a serene monochrome tone that reveals the simplicity and refined taste; modernity and comfort.

From the get-go, one can deduce that the album is a channel where Wizkid projects a calmer version of his personality. With ‘Made in Lagos’, his sounds are produced with live performances in mind, rather than being just radio-ready to top charts. Although a bit of disappointment for his fans who worship him for his rousing choruses and upbeat sounds that define his nascent days, it just might be growth he needs to lengthen his career.

‘Reckless’ is the album opener, a track steeped in the marinade of jazzy influences. And just like it, the remaining tracks on the album are rendered at a medium tempo pace. It gives off a feel that all the tracks were fabricated from the same music building block, but only nuanced by themes, genres, instrumentation, and lyricism.

Due to the album’s calm tone, it is hard to pick a favourite. What’s more, it is harder to internalize any particular tune. The lines were blurred between tracks through likeness. Amid this lack of panache to help individual tracks stand out, listening to the album in its entirety is not a boring experience. Even though he fails at showing versatility in sound, his choice at the creative level can easily be forgiven.

A high point for the album remains his choice for collaborators. Handpicking Damian Marley, Skepta, Ella Mai, H.E.R., Burna Boy, Terri, and Tems, each collaborator seamlessly introduces their musical styles without compromising in any form to fit in. This sheer brilliance helped evince emotions on themes such as lust, love, self-love, and commitment.

The big question now remains: does ‘Made in Lagos’ sound anything like Lagos?

With Lagos as the entertainment nucleus of West Africa, it is credited as the home planet for afrobeat, and afrobeats sounds. Though Wizkid explores the genre greatly, his intentions were more than that: the singer has eyes focused on the international audience.

The album structure easily eases foreign listeners into the genre. The album is an invitation passed to them, but not necessarily a collector’s item that will be sought after by local listeners. Also, his choice for collaborations affirms this effort to take a good portion of the international streaming numbers. It was made in Lagos for international export.

Above all, this project shows the growth of his artistry and a better understanding of the global music industry to maximize gains.