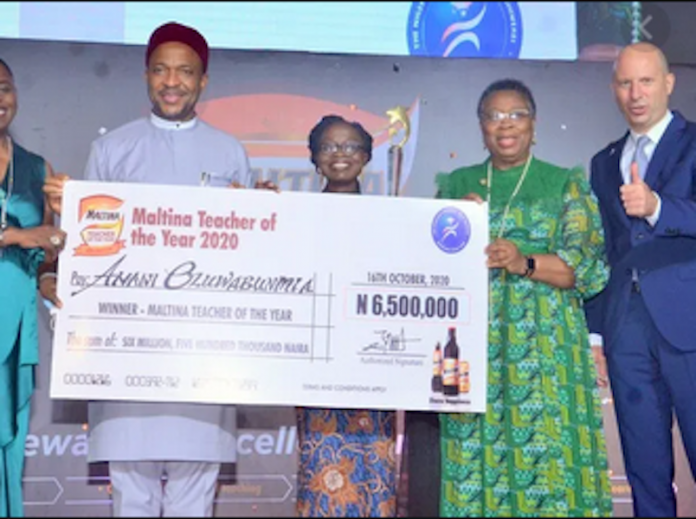 An English Language teacher at Concordia College, Yola, Adamawa State, Oluwabunmi Anani has been declared winner of the sixth Maltina Teacher of the Year, at the grand finale held recently in Lagos.

For emerging winner of the 2020 edition of the initiative, Anani will receive a total cash prize of N6.5 million (N1.5 million immediately and N1 million annually for the next five years) from the Nigerian Breweries- Felix Ohiwerei Trust Fund.

She would also have the privilege to be part of an all-expense paid capacity development training abroad, while a fully equipped computer laboratory or six-classrooms block worth N20 million will be built for her school in her honour by the fund.

Speaking at the event, the Minister of State for Education, Chukwuemeka Nwajiuba lauded the company’s commitment in supporting the education sector by rewarding high performing teachers through the annual initiative.

He said it was heartwarming to note that the company is keeping faith with the initiative despite the disruptive impact of the coronavirus pandemic on businesses and economy.

In his welcome address, the Managing Director, Nigerian Breweries Plc, Mr. Jordi Borrut Bel, explained that the initiative was designed to recognise, celebrate and motivate teachers whose stories have become great reminders of their role in laying the foundation for a good society.

While congratulating the finalists alongside state champions for coming this far, he stated that the role of teachers cannot be underestimated, given their contribution to shaping and moulding lives. “With the Maltina Teacher of the Year, we are saying that our teachers can and should be rewarded for their roles in the development of our nation,” Bel said.

Also speaking at the event, the Lagos State Commissioner for Education, Mrs. Folashade Adefisayo, who represented Governor Babajide Sanwo-Olu, commended the company while noting that teachers play a significant role in nation-building given their contribution in imparting knowledge in the lives of their students.

In her remarks, the Corporate Affairs Director, Nigerian Breweries Plc, Mrs. Sade Morgan stated that the sixth edition was an improvement from the preceding year in terms of participation as the initiative received 1,234 entries from teachers all over the country, despite the short submission period and other challenges caused by the coronavirus pandemic.

Morgan, who commended the resilience and uncommon passion of teachers for defying the odds by finding new ways to teach students virtually despite the technological limitation, noted that their contribution during the difficult period lends credence to their critical role in societal development.

Speaking shortly after she was announced as winner of the coveted prize, Anani thanked the company for putting smiles on the faces of teachers through the initiative by rewarding and recognising them.