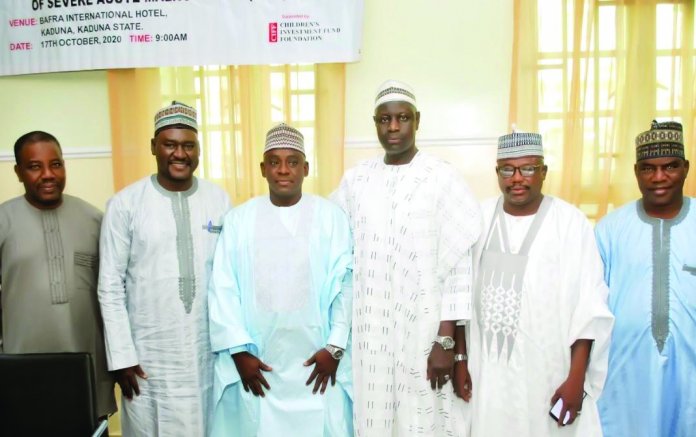 Available reports indicate that acute malnutrition remains high in Northern Nigeria with about 2.2 million children severely malnourished. It was against this backdrop that Civil Society Legislative Advocacy Centre (CISLAC), a non-governmental organisation, organised a one-day legislative summit in the affected states to enlighten them on prevention and treatment. Sunday Ehigiator reports

The sight is scary and worrisome. If not for the occasional breathing and eyes that are wide open, they look dehydrated and lifeless. Each year about one million Nigerian children die before their birthday and malnutrition contributes to nearly half of these deaths. While malnutrition reduces the GDP of a nation by 8 per cent, Nigeria records the highest burden of malnutrition in Africa. Malnutrition impedes physical growth and cognitive development of a child, with one in three (32%) of Nigerian children experiencing nutrition deficit.

The consistent dwindling financing for nutrition in the national and state’s budgetary allocation is a serious concern that if not promptly addressed may exacerbate increasing cases of SAM with resultant child mortality in the country.
Worried by this trend, CISLAC, led by its executive director, Auwal Musa Rafsanjani, organised a Legislative Summit on the Prevention and Treatment of Severe Acute Malnutrition (SAM) for Speakers, Chairs of Committees on Health and Appropriation, Clerks of Bauchi, Gombe, Jigawa, Kano, and Kastina State houses of assembly. State Nutrition Officers and Civil Society Organisations in the states were also included, in view of the funding challenges posed by the COVID-19 Pandemic and how to mitigate the challenge.

In his remarks, CISLAC boss said the summit became imperative because he was concerned about the available reports indicating that malnutrition remains high in Northern Nigeria with about 2.2 million out of 2.5 million severely acute malnourished children from the region.

“We find it worrisome that during the review exercise of the 2020 federal government budget as a response to COVID-19 impact, the N800 million that was initially allocated for the procurement of Ready-To-Use-Therapeutic-Food (RUTF) was expunged. We also note, with serious concern that N146,014,000 allocated to the treatment of severe acute malnourished children in the 2021 appropriation bill is grossly inadequate to cater for the millions of children requiring treatment from Severe Acute Malnutrition in the country,” he said.

Having identified the problems, therefore, the summit provided a platform for legislators from the five target states to share experiences on their role towards sustainable and improved nutrition funding in their states, avail legislators the opportunity to review the current efforts of their state governments for improved nutrition interventions and status of the States, and how the State Houses of Assembly can come in, including taking steps to ensure full implementation of recommendations on any new funding streams/strategies for nutrition at the sub-national level in the wake of the COVID-19 realities going forward.

In addition, they guided the legislators on how to ensure that Severe Acute Malnutrition(SAM) prevention and treatment is properly focused and prioritised as a human rights issue through appropriate legislative interventions.

In their presentations during the summit, the nutrition officers narrated how their respective states are trying to get rid of the ugly trend but also identified some of the challenges. For instance, Gombe State Government has adopted different strategies in order to address problem of malnutrition by implementing various interventions and basic Nutrition packages for women and children to access the services. And in order to strengthen and ensure continuity of the Nutrition activities in the state, Gombe State Government approved N75 million for procurement of Ready to Use Therapeutic Foods’ (RUTF) in the year 2020. N25 million was released to UNICEF and 1,159 cartoons of RUTF were procured and distributed to the implementing LGAs.

An update on Kano nutrition in the last quarter showed distribution of deworming tablets for adolescents at the age of 10 – 19 years across the 44 LGAs.
For Katsina, the nutrition situation is characterised by a double burden of malnutrition with about one third of the children under five years stunted (more than half in the northwest).

While in Bauchi only UNICEF is supporting CMAM, MNP and IYCF. No any other IP/NGO is taking part.

While sentizisation programmes on radio and television are ongoing, the major problems identified that have been an impediment are inadequate information to care givers on the differences between Polio vaccine and Vitamin A and inadequate knowledge on complementary foods.

To CISLAC and its team, they believed problems identified are already solved and it is essential to open critical deliberation on the developmental challenge at hand. It is hoped that a result-oriented deliberation will be applied in support of legislative and policy processes towards sustainable prevention and treatment of SAM in Nigeria.

After deliberating exhaustively on various thematic issues, the following observations, recommendations and action points were noted for implementation. It was observed that the dreaded impacts of malnutrition include monumental economic and productivity losses, irreparable potential loss, increased susceptibility to communicable diseases and other infections. That Nigeria is one of the countries responsible for 80 per cent of global child malnutrition and the North-western states bear the most burden of SAM in the country, that poverty, lack of awareness, funding and inadequate nutrition personnel emerged as the three most significant causes of malnutrition in all the five states, that RUTF usage is being abused by mothers who use it as a means of livelihood at the expense of their children’s health/lives while insecurity in some of the northern states constitutes a major challenge to SAM intervention programs in the state.

In his closing remarks, the CISLAC boss commended the Speakers and pledged his team unflinching cooperation at any level to provide technical support which will enhance their legislative work in achieving the set goals.