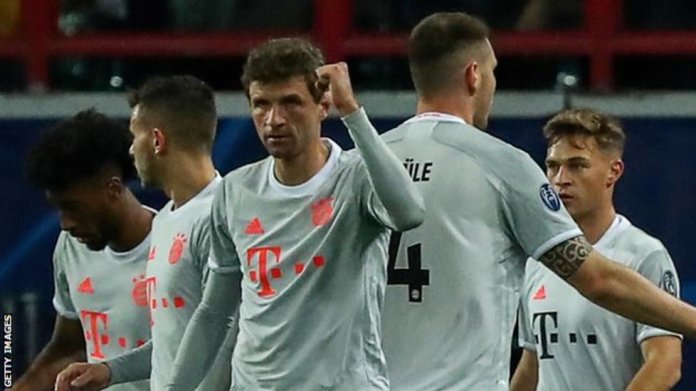 Champions League Cup holders Bayern Munich Tuesday night extended their winning run in the competition to 13 games as they edged past Lokomotiv Moscow 2-1.

Midfielder Joshua Kimmich got the late winner when, on the turn, he superbly volleyed into the bottom corner.

Bayern have now won 34 of their 36 games in all competitions in 2020 and manager Hansi Flick has won all 10 of his Champions League games, by an aggregate score of 40-5.

Lokomotiv, boosted by a few thousand home fans, started strongest and should have taken the lead when the unchallenged Fyodor Smolov headed straight at Manuel Neuer from six yards.

After Goretzka’s magnificent opener Bayern grew into the game and dominated the remainder of the first half, with Kingsley Coman coming closest to extend their advantage when his volley from 10 yards hit the post.

Robert Lewandowski, who was unusually quiet, was awarded a penalty midway through the second half after a brilliant run through three players, but the decision was overturned by VAR for a tight offside.

Lokomotiv got a deserved equaliser as they finally capitalised on the space in behind the Bayern defence, and had further opportunities to shock the holders but their final ball and finish was lacking.

Bayern’s winner was a moment of real class as Kimmich superbly controlled a heavily weighted pass before turning and volleying into the bottom corner, past the rooted Guilherme Marinato, from 22 yards.

Bayern have a five-point advantage at the top of Group A, with Atletico Madrid hosting FC Red Bull Salzburg in the other game in the group at 20:00 GMT.