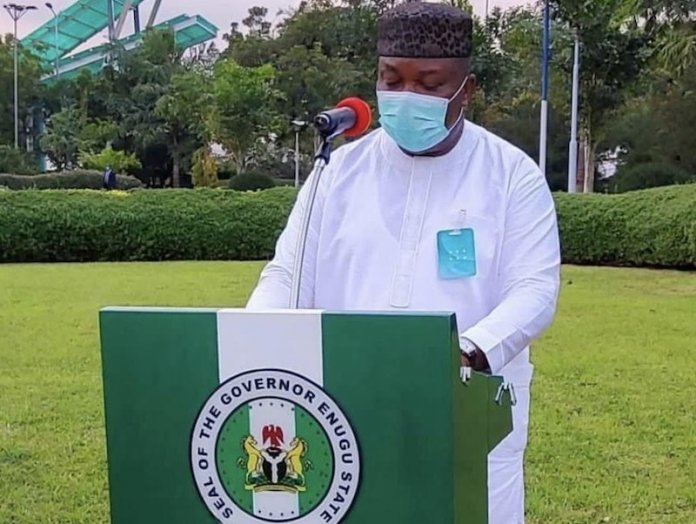 I wept when I saw the wanton destruction of private and public properties across the peaceful and beautiful city of Enugu by vandals and looters, hiding under the guise of the hijacked ENDSARS protests. For two days, these street urchins, who looked like strangers and came out enmasse had a field day wrecking havoc in Enugu city.

They destroyed banks, ATMs, streetlights, wastebins, public and private buildings and even set ablaze some government institutions. On the second day of their criminal activities, they were not even deterred by the curfew imposed by Governor Ifeanyi Ugwuanyi in three council areas within the capital city on the first day of the ugly incident.

Their obstinacy and boldness in carrying out the nefarious activities, pointed to the fact that they are paid vandals, criminals and looters, who were brought into Enugu to disturb the peace of the state, provoke the people and security agents into a face-off that could be catastrophic.

It is also possible that their plan of unleashing mayhem on the state was to trigger the declaration of state of emergency that could lead to a change of government. Thank God that in the face of the unwarranted and premeditated attacks and provocations by these vandals in Enugu for two days, Ndi Enugu, security agents and Governor Ifeanyi Ugwuanyi displayed tolerance, maturity and competence by controlling the situation from degenerating to loss of lives that are sacrosanct. Property could be easily repaired or replaced, but human lives are irreplaceable.

Their being calm or refusal to embark on fistcuffs or reprisal against marauding vandals was not out of weakness, but huge sacrifice for peace and normalcy to return.

That is why after the destruction and looting by the vandals, Governor Ugwuanyi in his state broadcast appealed for calm, while sympathising with the victims of the protests. Speaking Gov. Ugwuanyi who condemned the acts of violence and criminality perpetrated by hoodlums, sympathised with victims of the violent protests.

The governor therefore appealed “most passionately to youths of Enugu involved in the mayhem to have a rethink, pull back and allow measures instituted to address our collective pains to play out”.

He disclosed that his administration has inaugurated the Judicial Panel of Inquiry to investigate complaints of police brutality and/or related extra judicial killings in the state, reiterating that the 24-hour curfew imposed in Enugu East, Enugu North and Enugu South Local Government Areas of the state is still in place.

Appealing further to the protesting youth the governor said: “Let us take back our hitherto peaceful Coal City from hijackers of the peaceful protesters and perpetrators of violence and criminality who do not represent our collective wishes”.

It would be recalled that while some state governors did not address the ENDSARS protesters in their states at peak of the protests for reasons known to them, Gov. Ugwuanyi and his deputy, Mrs Cecilia Ezeilo, addressed the protesters three times. It was during the last encounter with them that some celebrities among them tried to politicise the protest by deviating from its main agenda into politics.

In all his encounters with the protesters, Gov. Ugwuanyi assured and reassured them of his administration’s commitment to their yearnings with the setting up of Judicial Panel of Inquiry on Police Brutality. Ugwuanyi has since inaugurated the Panel with clear terms of references. The Panel has also announced date for the commencement of work.

This is an ample opportunity for all those who have suffered or experienced Police brutality to present their cases through memos to the Panel with evidences and at the same time suggest the way forward. No more rhetoric and social media rantings on police brutality in Enugu State without evidence. This is time to substantiate claims of being victims of police brutality in Enugu. No more compromised protests and vandalisation of public utilities.Gov. Ugwuanyi has since visited the SARS office in Enugu to ensure that it is closed down as demanded by the protesting youths.

It is clear that if not for the tact and peaceful dispositions Gov. Ugwuanyi deployed in managing the delicate situation, the crisis would have gone out of hand and throw the state into deep crisis.

Now that Gov. Ugwuanyi has in his broadcast appealed for calm, despite being provoked and challenged, and the patriotic youths of Enugu have also commenced clearing of debris on the major roads in the city, it is time for Ndi Enugu and the vandals to embrace peace to appreciate the governor for his fatherly and tolerance in the face of provocations. After all, the events of Odi in Bayelsa State and Zaki Ibiam in Benue State is still fresh in people’s memories.

Enugu State is known for its peaceful and secure ambience. This can not be sacrificed on the altar of politicised and compromised protest that does the state and her people no good. It is hoped that the vandals and their collaborators will not mistakenly test the will of Ndi Enugu and their government again by trying to repeat such dastard and barbaric acts that are alien to the state and its people’s especially since Gov. Ugwuanyi came into office.