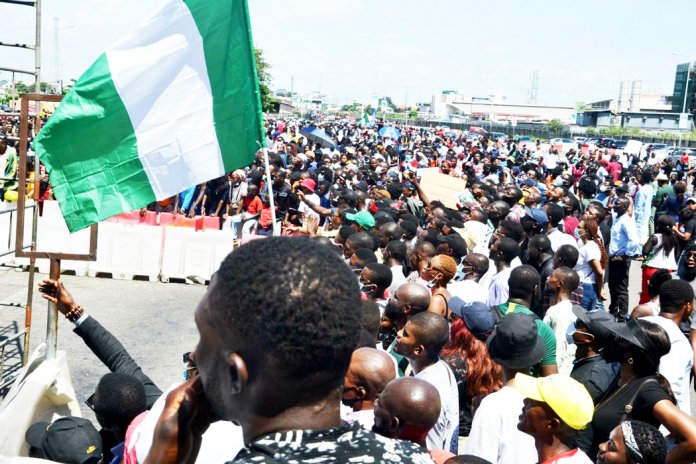 The time bomb that pundits have always described and cautioned against, as constituting the socio-political leadership foundation of Nigeria, is finally upon us. The country is scaringly convulsing on the edge of the cliff as the rump of what was supposed to be a security bulwark, is revealing a seemingly helpless situation of anarchy and anomie in the face of rampaging hoodlums cashing in on the legitimate agitations initiated by protesting youths and other adults against Police brutality, a monster that was symbolised by the operations of the now rested Special Anti-Robbery Squad, SARS. It is beyond any debate that SARS was synonymous with extortion, harassment, torture and outright murder.
Indubitably, Nigeria is gradually sliding into the throes of lawlessness, no thanks to the arrant arrogance and misguided leadership that have been foisted on us over time by the political class, in disdain for the people’s mandate.

In a situation as Nigeria is currently embroiled in, the first sacrificial casualty is Security and the law, the evidence of which is seen in the pervading insecurity, extrajudicial killings and wanton destruction of properties which are now the concomitants of the #ENDSARS protests nationwide.

How did we get to this Sorry Pass?

The question that has continually begged for answer, is how we got ourselves to this sorry pass, where sacrosanctity of life religiously recognised and constitutionally preserved in our corpus juris has become totally lost on us, that in one long, dark and eerie night, men of the Nigerian Army, whose primary statutory mandate is to fight and suppress any external aggression threatening the corporate existence of Nigeria, turned their weapons on innocuous and benign protesters. In “My Mussing”, published on my facebook page of 21.10.2020, I wrote inter alia thus:

“…It was a night in which men of the Nigerian Army who are maintained and sustained by tax-payers money opened fire on young, unarmed protesters who were seated at the Lekki Toll Gate, waving the Nigerian flag(s), singing the National Anthem and protesting against and demanding an end to police brutality – #ENDSARS.

Without any equivocation, I condemn the action of the #NigerianArmy and #FGN. It is primitive, uncivilised, unconscionable, dastardly, reprehensible, condemnable, senseless, callous, mindless and barbaric. Indeed, the shameless act of the Army constitutes a desecration of the Nigerian flag and a violation of the Constitution.

May the souls of all the #ENDSARS soldiers felled by the #NigerianArmy bullets rest in peace.

The Nigerian government must put an end to all forms of human right violations. It should also remember that those who make peaceful change impossible, make violent change inevitable”.

I stand by the fore-quoted. One does not need to look too far to know that Nigeria, for far too long, has been perching on a time bomb of structural defects, systemic imbalance, ethnic, tribal and religious sentiments, spiralling unemployment rate of able-bodied youth, infrastructural deficit and decay, armed banditry, unending inflation, mis-governance, etc, as a few indices of a failing State.

The sad irony of it all is that the initial protests which were roundly hailed by all and even endorsed by political authorities in Nigeria, have now become counterproductive. In consequence, we have now witnessed the infernal destructions of the headquarters of the National Port Authority, a gigantic edifice housing the operation of the Port Authority, the TVC Station in Lagos, the buildings and property of the Lagos High Court, the desecration of the Palace of the Oba of Lagos, the jail breaks in Edo and other States, the looting of an entire shopping avenue in Lekki in one night, and countless destructions and looting of other public and private investments and possessions in several part of Nigeria. BRT buses which are meant for use by the masses, were mindlessly set ablaze. The emerging contradiction in all of this is that, it is the masses that will bear the brunt of the ruthless and reckless destruction of these public assets and not, by any stretch of imagination, the elites or ruling class against whom the protests are targeted!

It bears repeating to state that, what had started for us as a positive respite from the oppressive reign of Police brutality has now been hijacked, and transfused with another life of unimaginable oppression likely to choke the entire polity in the miasma of toxic fumes of violence being unleashed.

Beyond the huge capital outlay of funds required to rebuild the destructions visited on both the public and private properties, the already hopeless employment situation in Nigeria will further be given a fillip.

While it is beyond disputation that the defunct Police contraption, SARS, deviated and embarked on its own self-serving voyage outside the traditionally statutorily recognised role of the Police by the brutalities it unleashed on or against the very people it was meant to protect, the events that have followed the agitation and protests exemplified by the popular #ENDSARS indeed, call for sober reflection.

Not oblivious of the narrative of a symbolic poster boy that the #ENDSARS agitation became for other systemic failings, it beggars explanation why the officers or outlawries who perpetrated the reign of terror and lawlessness in the now disbanded SARS have yet to be brought to book. To fish out the miserable 34 or so members of SARS, comprising mainly of low ranking officers who might have acted on the commands and orders of their respective superiors for prosecution or disciplinary action, is another layer of injustice and institutional hypocrisy. Surely, the hands of our laws are not so short, nor the laws blind. Only the symbolic femininity of justice, ties the blindfold.

If Mr. President had slumbered throughout the time the atrocities of SARS lasted, the prevailing reactions of protesters should serve as a wake-up call. The outrage loudly expressed by Nigerians, must not precipitate poorly drafted speeches which offer nothing but veiled threat and intimidation of the citizenry and international community. There is the urgent need for justice for the Nigerian citizenry who had been in bondage of the SARS operation, with many lives snuffed out extra-judicially. It is not justice where the only punishment for the enablers at the commanding heights of the SARS operation, are only made to swap positions and operate joyfully elsewhere ever after. Certainly not!

The right to life of Nigerian citizens which SARS flagrantly violated as a pastime, is a fundamental right from whose umbilical cord all other rights draw life. Thus, Section 33 (1) of the Constitution of the Constitution of the Federal Republic of Nigeria, 1999 (as severally amended) clearly guarantees every human person the right to life, and forbids the intentional deprivation of the life of another, save in the execution of a sentence of a court. To assuage the current angst against the noted violations, government must apply the justice of fair dessert on the enablers of SARS brutalities anywhere they are found, whether in service or in retirement. This is a first step and elixir, to any contemplated institutional reform.

The widespread situation in Nigeria whereby a day hardly passes without a recorded case of brutality by the Police and other security agencies, has regrettably, culminated in youth uprising and budding revolution. The rule of might has held sway for too long, in consequence of which the rule of law and justice have now become the victim.

The prevalence of insecurity and extra-judicial killings on the one hand, and the current sad realities of our national life [in Nigeria] exists in causal relationship. Of course, where insecurity and justice become the norm, life loses its sanctity and the Hobbesian state of nature, where the life of man is solitary, poor, nasty, brutish and short, takes pre-eminence. State-sponsored or extra-judicial killing, is usually a corollary of State abdicated responsibility of good governance. Therefore, where good governance is lacking in any society, man regresses to his Hobbesian natural state of selfishness and intolerance. The current prevalence of near lawlessness and insecurity in the wake of the unwarranted reaction of the security agencies at turning their weapons on the protesting youths against Police brutality and extra-judicial killings in the country, is a function of the abdication of the State responsibilities of realpolitik of welfare of life and property constitutionally preserved in preference for the primordial politics of cronyism, nepotism and ethno-religious sentiments.

Except by conscious efforts at good governance, the current reality of near lawlessness in the polity will continue to reign as an inevitable concomitant.

In ending this short piece, let me observe that when a nation is in turmoil, it is the Lawyers that are called in to chart a direction. In the words of the first indigenous Nigerian Lawyer, Chief Christopher Alexander Sapara Williams (of blessed memory), “a Lawyer lives for the direction of his people”. This presupposes that the very essence of the legal profession, is direction. Lawyers in Nigeria must, therefore, arise to retake the baton in this endless relay of mis-governance, so as to champion the elusive direction that the Nigerian State profoundly needs at this time. Ours is a nation in bewilderment.

The torchlight to chart this direction has continued to lie prostrate with the beam facedown, where our beloved fiery colleague, the late Chief Gani Fawehinmi, SAN (may the good Lord bless his soul) left it. Lawyers must walk the law to the destination of institutional rejuvenation. It is only by so doing, that the very essence of life which security and justice seek to preserve, and which the wanton deprivation of same by extrajudicial killings, seek to frustrate, can be realised.

As short-term measure, the government of the day must do well to tow the populist path by wide consultation outside its advisory circle and implement populist-driven solutions, in order to assuage frayed nerves and restore sanity.

May the souls of all Nigerians who were felled by Army bullets on 20.10.2020 and on all other days during the peaceful protests, rest in peace. Similarly, may all the security operatives who died in the line of duty while providing security for the protesters, find favour with the Lord.

May peace reign in Nigeria. Amen.