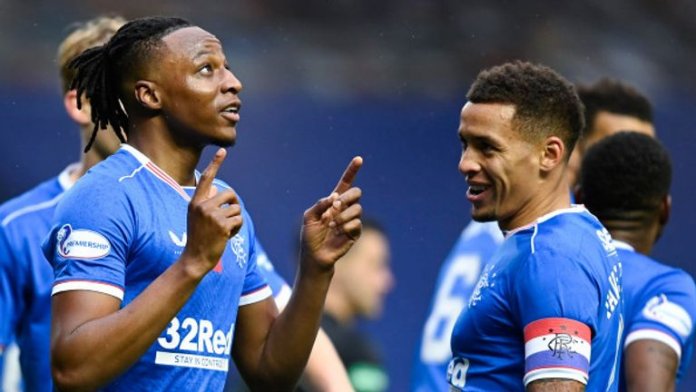 Super Eagles forward, Joe Aribo scored the opening goal as Glasgow Rangers moved six points clear of Celtic at the top of the Scottish Premiership with a comfortable 2-0 win over Livingston on Sunday evening.

The goal was Aribo’s second in five games for Rangers.

The 24-year old Nigerian international put the home team ahead in the n9th minute after he was set up by Ianis Hagi.

Hagi dispossessed another former Nigerian player, Efe Ambrose, and set up Jermain Defoe, whose shot was stopped by the goalkeeper’s legs, but Hagi showed good awareness to square to Aribo, who swept the ball into the empty net.

Defoe scored his 300th club career goal to add to Joe Aribo’s 9th minute early opener, and even though Livi hit a post, Rangers continued their domination through the second half.

With Celtic dropping points at Aberdeen, Steven Gerrard’s side took full advantage to increase their lead at the league summit, having played one game more.

For Livingston, it is a second defeat in a row and they remain ninth in the table.

Since a 0-0 draw between the pair in August, both Aribo and Defoe have had little problem in scoring. Rangers have hit 32 goals in 11 games, Livingston 17 in nine.

Each side had a lot to be motivated for in this fixture, too. Rangers were eyeing the chance to increase their lead at the top, while Livingston knew a win would

lift them into the top six.

But Gary Holt’s men were made to pay early on for a lack of concentration in their own box. Ianis Hagi collected the ball and fed Jermain Defoe, whose shot was blocked, but the Livi defence ignored the threat of Aribo who slotted in unmarked six yards out.

As simple as the first was, Rangers’ second was a touch of class from Defoe. The 38-year-old – making his first start of the season – met James Tavernier’s inch-perfect long ball and glided a low, first-time shot past Livingston goalkeeper Max Stryjek from the edge of the box.

Livingston had failed to score on the road only once this season, and they almost elicited an instant response when Connor Goldson directed a cross off his own post. Agonisingly for Jay Emmanuel-Thomas, the ball bounced off him and into the arms of goalkeeper Allan McGregor.

Good deliveries into the box just evaded Defoe and Tavernier when a tap-in would have secured a third goal for Rangers. But it was all very flat from the home side and Livi were threatening from set-pieces.

Jordan Jones was introduced as Gerrard attempted to spark some life into his side, and the Northern Ireland international forced a fine fingertip save from Stryjek.

A goal from the visitors would have made for a nervy ending, but McGregor had little to contend with as Rangers eased to another three points.

With Celtic not in league action next week, Rangers could go nine points clear at the Premiership summit when they travel to Kilmarnock on Sunday, but they have a midweek Europa League tie at home to Lech Poznan of Poland first.