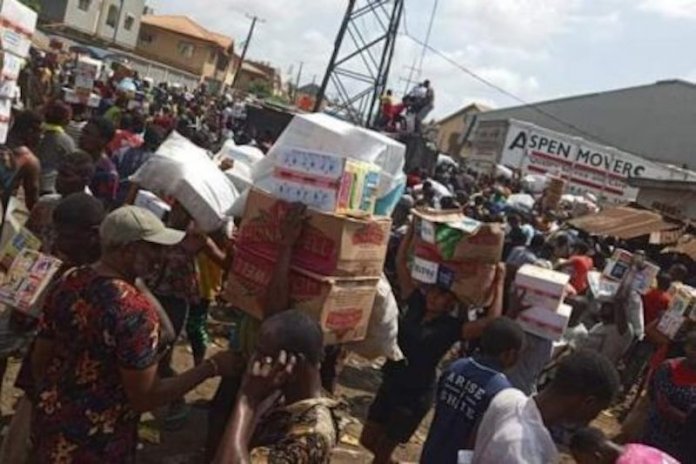 Udora Orizu questions the wisdom behind the decision of many state governments to hoard food items meant for distribution as COVID-19 palliatives, while hunger ravaged millions of citizens

Following the shooting of unarmed EndSARS protesters by security operatives at Lekki Tollgate on October 20, 2020, the protests degenerated into more arson and looting as hoodlums under the guise of the #EndSARS protest turned it into a bazaar of looting, stealing and destruction. However, some clear patterns have emerged from the apparent mayhem. For instance, the angry mob have lately turned to searching for warehouses where COVID-19 palliatives are kept across the country. From the discovery and subsequent stealing sy the first COVID-19 palliatives warehouse in Lagos, a similar trend of discovery and looting of COVID-19 palliatives have been reported across the country.

These viral break-ins and looting of various COVID-19 warehouses across the country have thrown up many questions, which include the motive behind the looting-whether the looters were angry or hungry, or both and why the state governments hoarded food items meant to be distributed as palliatives while hunger ravaged millions of citizens. The looting which started from Lagos, has extended to states like Oyo, Osun, Plateau, Edo, Kwara and so on.

On October 24, large crowd of people, men, women both young and old broke into some of the warehouses in different parts of the country, where COVID-19 palliatives were kept by the different state governments, organisations and looted them.

As seen in a viral video, scores of residents in Lagos, on October 22 carted away food items stacked in a warehouse in Monkey Village, Maza maza, in Amuwo Odofin.

The food items, which were labelled ‘CACOVID, NOT FOR SALE,’ include bags of rice, macaroni, spaghetti, salt, garri, sugar and cartons of noodles. CACOVID (Coalition Against COVID-19), launched in March this year, is a private sector-led organisation established to assist the government in combating the coronavirus disease.

Defying the 24-hour curfew put in place by Governor Ben Ayade, hoodlums, had a field day in Calabar, the Cross River State capital, where they looted and set ablaze public and private property. The thugs set on fire the family residence of Senator Gershom Bassey, located at Mayne Avenue in Calabar. They also ransacked and looted the senator’s personal residence at Asari Eso Layout. They set ablaze the residence of a former leader of the Senate, Victor Ndoma-Egba, also located along Asari Eso Layout. They went on to vandalise and loot the private residence of Senator Bassey Ewa Henshaw.

The city remained in a state of anarchy for almost 48 hours, as hell was let loose with government and private property worth billions of naira destroyed and looted. Other property either looted or burnt by the hoodlums included the Municipal Zonal office of the Independent National Electoral Commission (INEC) at Marian Road, Valuemart Supermarket at Marian Road, Federal Psychiatric Hospital, Calabar Road, Garment Factory along Goodluck Jonathan bypass, First Bank’s 8 Miles and Mayne Avenue branches. Also affected were Nigerian Ports Authority Harbour, Tinapa Business Resort, State Emergency Management Agency (SEMA), and the Cross River Newspaper Corporation (Publishers of the state-owned newspaper, The Chronicle) premises along Barracks as well as the Calabar office of the West African Examinations Council (WAEC).

Residents of Jalingo, Taraba State, also discovered and looted a COVID-19 palliatives warehouse in the state. It was gathered that the residents overpowered security operatives, who watched helplessly as the people made away with different food items. In videos of the looting, residents could be seen driving tricycles and cars as well as pushing carts into the warehouse for easy carriage of the food items. However, there were reports of a stampede as more people trooped into the warehouse.

Hoodlums in Benin City, last Saturday, stormed the government warehouse along Medical Store Road in the Uselu, axis of the Edo State capital and looted the COVID-19 palliative items stored in the warehouse. The thugs which had earlier that day been prevented by military personnel from carrying out the act, succeeded in breaking the human shield mounted by the military and entered the store in their hundreds.

In Ekiti, however, residents last Friday attacked the federal government’s silos located in Ado Ekiti and carted away fertilizers and poisonous seeds preserved for planting while searching for CACOVID palliatives. Also attacked were State Emergency Management Agency warehouses, where materials stored as relief for flood victims were kept.

As there are no COVID-19 palliative warehouse currently, the residents defied heavy downpour and attacked the silos located along Federal Polytechnic, Ado Ekiti around 7.30pm and made away with items suspected to be poisonous and not consumable. They were reported to have mistaken the fertilizers for garri and the preserved maize as consumable grains.

It was gathered that large number of residents had boarded vehicles and motorcycles from far distances like Ijigbo, Ajilosun and Odo Ado Area of the metropolis to the area to perpetrate the looting. Soldiers were said to have been drafted to the silos to protect the commodities, but people were said to have started looting before the soldiers got to the scene.

This scenario was said to have caused traffic logjam along Ado-Ijan -Ikare road, as soldiers made spirited efforts to disperse the huge crowd of intending looters that massed at the scene. Several persons were said to have sustained injuries as soldiers reportedly deployed minimal force to push away the crowd.

Reacting, the state government in a statement by the Information Commissioner, Mr. Akin Omole, warned that commodities being looted from the silos were poisonous.

The statement said: “Reports reaching us confirm that the Federal Government’s Silos, the Agric Development Programme (ADP) warehouse and the State Emergency Management Agency (SEMA) store, all in Ado- Ekiti, have been attacked by hoodlums under the guise of seeking CACOVID palliatives.

“Ekiti State has NO CACOVID palliative warehouse as all the palliatives have been distributed. The items being carted away are Single Super Phosphate fertilizer and NPK which they have erroneously identified as Garri. The SEMA store has emergency supplies for disaster response e.g. flood, fire or any other emergencies. Some are even making away with corns preserved for planting, with chemical prefermentation. All these items are poisonous and not fit for consumption. We appeal to our people not to consume these items because they can kill. Ekiti State has NO COVID-19 Palliatives warehouse as all palliatives have been distributed to members of the public during the lockdown period.”

On Saturday, thugs looted Plateau State COVID-19 palliative warehouse at Bukuru community of Jos South Local Government Area. It was learnt that the hoodlums stormed the warehouse said to belong to the State Emergency Management Agency and pulled down the doors before carting away the palliatives. Some of the items carted away include beans, noodles, sugar, salt, garri, rice and pasta. In a 19 seconds video that emerged online, the people were seen in the compound where the palliatives were kept.

Hoodlums also broke into government warehouses in Akure, the Ondo state capital, and looted COVID-19 palliatives allegedly stored there. The hoodlums according to reports thereafter set the warehouse ablaze.

The warehouse is located within the Chief Magistrate court premises in Akure metropolis. It was gathered that the palliatives were given to the state by the Federal government, and that the hoodlums stormed the warehouse and pulled down the doors, and carted away the palliatives.

It took the intervention of the military to restore normalcy to the scene of the incident in Akure, Ondo State capital. A viral video of the incidents on social media showed people packing out bags and cartons of the palliatives. The palliatives include bags of rice, sugar, Indomie Noddle’s, and other food items.

At the capital of Kwara State, Ilorin, residents last Friday broke into the warehouse housing food items stored for distribution as COVID-19 palliatives.

The warehouse is located around the Ilorin International Airport, opposite Oando filling station. Video footages showed people stealing food items like noodles, spaghetti, rice, sugar and garri.
People used motorcycles and buses to transport looted items from the warehouse to their respective homes.

Last Friday, youths stormed a warehouse in Ede town, where COVID-19 palliatives were allegedly stored, and carted away food items meant to be distributed to residents.

According to reports the angry youths trooped out in their hundreds to the moribund Cocoa-Ceramic Industry in Ede where the palliatives were stored. Some of the items carted away include beans, noodles, sugar, salt, garri, rice, pastas among other items. No attempt were made to stop them.

Security operatives were, however, deployed to the area but it took a while before they could disperse the crowd.

After the crowd was dispersed, security agents formed a barricade around the warehouse, but some residents were seen hanging around the vicinity.

In Bauchi state, hoodlums defied the ongoing curfew imposed by the state government and looted the house of a former Speaker of the House of Representatives, Mr. Yakubu Dogara. They also invaded other buildings in search of COVID-19 palliatives. Sources said Dogara’s house was attacked around 9:00 am.‎

Attempts by the police and other security operatives enforcing the curfew to disperse the rampaging youths by shooting into the air were not successful. ‎

An eyewitness said, “They broke into the house of the former Speaker and attacked everyone, including Dogara’s brother, and (they) are currently moving anything they see. In the process, the invaders moved several items – tricycles, furniture, electronics, and other valuables – out of the house.”‎