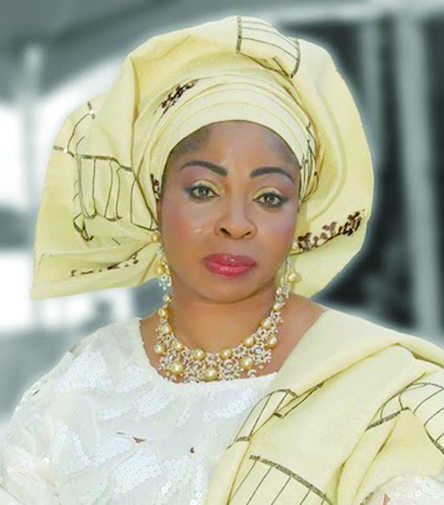 Princess Folashade Abiodun Omotade needs no introduction. She is a well-known socialite and top businesswoman.
The Ogun State-born businesswoman is also on the league of other high-flying business magnates around the country.

Earlier in life, she had a clear vision of what she wanted to do later in life and she pursued it with unwavering doggedness. While growing up, the only thing that caught her fancy was business and she refused to be swayed by any other interest.

As an entrepreneur, she always sees opportunities, and while others are bogged down by morbid fear of failure, she goes where others fear to tread. In fact, without recourse to exaggeration she is one that can rub shoulders with other businesswomen around the continent of Africa.

Her multimillion-naira factory has provided jobs for hundred in Ota, Ogun State.
Curiously, while this beautiful woman was enjoying her honeymoon with her new husband, the Lagos State Police Commissioner, Hakeem Odumosu, a few days ago, stories about her previous marriage began to pop up and her involvement with a property at 5A and 5B, Kayode Alli Street, Omole Phase 1, which was allegedly taken from her by the ‘wife’ of her ex- husband, Olaseni Ayodeji Omotade.

It was gathered that after the death of Deji Odumosu in the fateful Bellview crash in 2005, a certain woman named Grace Omotade, approached the court via a Suit No: ID/183M/2006 seeking an order restraining and preventing Folasade from accessing the the property at Omole Phase I.
In a swift reaction, the multimillionaire oil and gas magnate proved that she is not someone that can easily be trampled on or intimidated by anyone. She averred that the house belongs to her and that she purchased it at the sum of N60m from one Robins Omorere and that the name on the document of that property till today remains Biodun Folashade Modojutimi Omotade.

According to her, Grace was a concubine and faulted her claim that she was Omotade’s only wife. She also challenged her to produce the legal proof of marriage.
She explained, “So, I am challenging anyone with a contrary view in Nigeria to provide evidence. As a Director in the Civil Service, he was living in a Government property when he became Permanent Secretary.

“I can tell you that my husband did not have up to N1million in his bank accounts. He was my friend. His salary was N230,000 and he had four children schooling abroad, how was he going to cope, he was always under pressure, so where will he get money to buy a house in Lagos?”

‘’I had never had cause to deal with any lawyer before in my life until this matter up. So I went to Afe Babalola. He was the one who took up the case and for some reason, the case was having setbacks.
“I did not know what the cause was for this because I thought it was a straight forward matter, until I came to realise that the judge, a popular justice, was behind the problems I was having in court simply because Grace’s lawyer was the judge’s son in-law,” she added.

When asked why she is just speaking up now, she explained further, “I was told that the children were young and it may not be good for them psychologically. But today, they are now grown and they have given me the go ahead to say everything and anything that is the truth about their father. There was a story just last weekend that really got me upset and I decided that this rubbish must stop. I just said enough was enough.

“Of course, there was a judgment. The judge, who was in charge of the case, gave judgment without hearing a single word from me. He said we should go and share the property. Of course, we have gone on appeal. Grace and her lawyer, Bolaji Ayorinde, SAN, to date have not tendered a single document to prove the property belongs to Deji. This is all cheap blackmail. I will not succumb to it. That property is not the only one I have but I will not be cheated out of my sweat.”