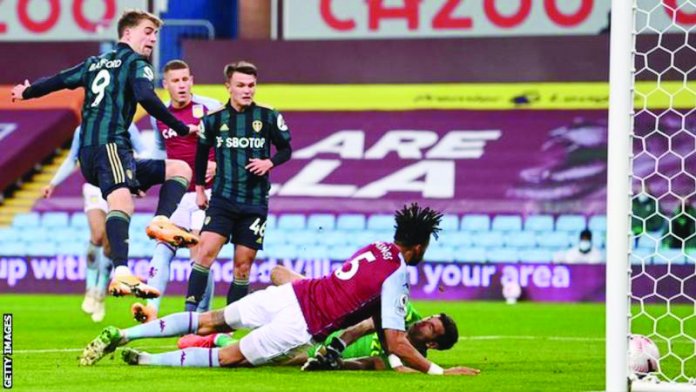 Aston Villa’s four-match winning run comes to an end yesterday as Leeds United move into third ahead of rest of Premier League games this weekend.

It was a barn-storming performance from Marcelo Bielsa’s side – who caught the eye with their lightning counter-attacks, neat one-touch football and 27 shots at Villa Park – despite a goalless first half.

Bamford had missed two glorious chances in the opening period, but soon put some demons to rest as he slotted home from an Emiliano Martinez’s save 10 minutes after the restart. The next two quickly followed – his second from a sublime effort which found the top corner in the 66th minute, before he completed his hat-trick with a scooped finish into the far corner in the 74th.

Villa will look back at some missed chances and wonder ‘what-if’. Jack Grealish had a shot cleared off the line by Luke Ayling in the first half before he and Ezri Konsa both went close early in the second period.

But Villa were ultimately unable to deal with Leeds’ direct play and miss the chance to go top of the Premier League table, remaining in second. Leeds are hot on their heels though, surging into third ahead of the remaining games this weekend