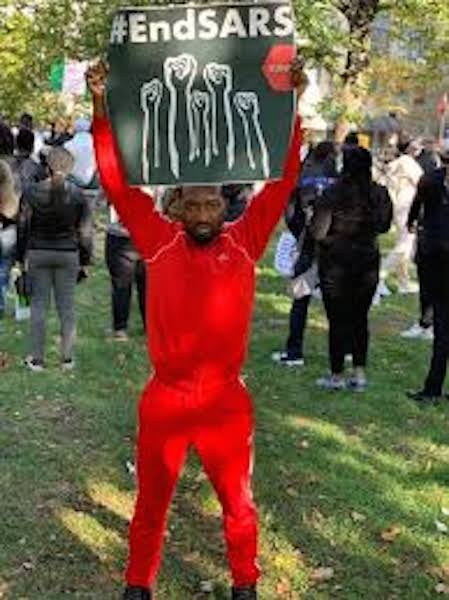 As the tension about EndSARS protest against Police brutality across Nigeria keeps mounting, a Nigerian US based Comedian, Japhet Attah Egwumah popularly known as Egwumah said the agitation has affected the mental health of Nigerian Youths.

He also called on the Federal Government to compensate the families of the reportedly killed EndSARS protesters.

He said this during a chat with newsmen on a plethora of issues bedevilling Nigeria at the moment.

He said while in college, he learned that the duty of the police was to protect the lives and properties of citizens; however the situation in the country right now has posed the contrary.

“When I was in college, I was taught that the duty of the police is to protect and serve the citizens of the country including the leaders of tomorrow a.k.a “the youth”. It is also written in the Nigeria constitution that the primary duty of Nigerian Police is to protect and serve it citizens; but today, the allegedly disbanded SPECIAL ANTI-ROBBERY SQUAD (SARS) which are supposed to protect us from hardened criminals and Thieves have become the opposite.

He said that “Nigeria Police do not protect the people rather do the opposite of policing and this has been happening for years while the government and IG of police turn a blind eye on Nigerian youth, despite rampant maiming and killing by SARS”.

To this end, Egwumah said the resulting effect is stress, trauma on the youth which has tampered with their state of mental health.

“Indeed, many have Post Traumatic Stress Disorders: Even those who have not experienced the trauma are stressed by proxy” he explained.

He further stressed that “Youth can look good or drive a fancy car; you can even use an expensive phone! How does it translate to one being a thief or criminal?”

He indicated that some of the effects of SARS on Nigerians are; Fear for their lives and of extortion; Hyper-Vigilance and therefore paranoia; Flash backs and resultant stress and Avoidance and dissociation.

Adding that “this can also lead to post traumatic stress disorder, the stress that results from SARS shootings has been amplified due to sharing, media and the lack of conviction for these crimes”.

He insisted that symptoms of the seemingly hostile police’s posture to the protest has included negative emotional conditions, psychological changes among Youths.

However, Egwumah said “President Nigerian Muhammudu Buhari do not see anything wrong in the perennial Police brutality.I believe the Nigerian Police needs a total reform, the government needs to compensate the Families that have lost their children as a result of Police brutality. I remain Japhet Attah Egwumah and I stand with the youth”.