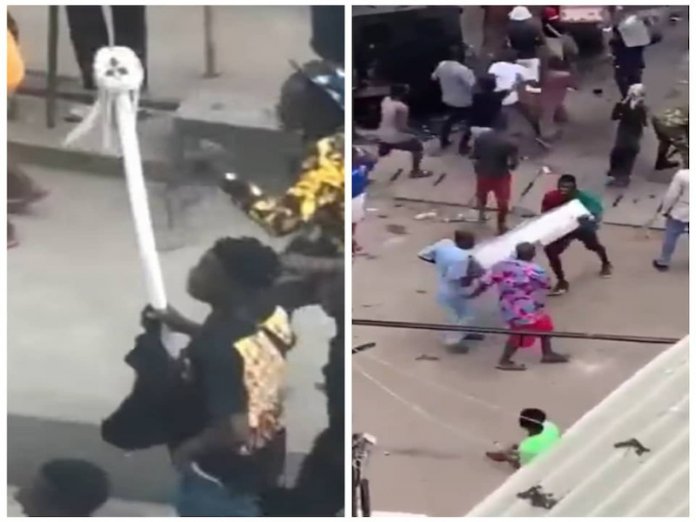 The Forum of Eko Princes and Princesses, and the Association of Lagos Titled Chiefs, a non-political association of honorary chiefs and prominent members of the Lagos community who have served the state and the nation meritoriously, have condemned the recent attack of the palace of Oba of Lagos by miscreants and hoodlums protesting #ENDSARS.

The chiefs, particularly expressed disdain over the desecration of the traditional institution of Lagos.

The General Secretary of the association, Chief Olawumi Gasper in a statement made available to THISDAY, said the development no doubt posed grave dangers to the culture and traditions of the good people of Lagos.

According to him, “The action was unacceptable as the highly revered and age-long traditional institution of Lagos will not be compromised and must be preserved. “The tradition and culture of the people of Lagos has been with its people for centuries and therefore a taboo for instruments of office (traditional staff) or any of its replica to be carted away from the palace. No less important are other traditional artifacts taken away by these miscreants.”

He explained that in the tradition and culture of Lagos and indeed the Yoruba people, the Oba is not only a King but the spiritual head of the people.

The statement reads in part, “The traditional authority also has an aristocratic flare commanding respect and obedience. The King is the custodian of the history, traditions and culture whose words and actions are sacred and therefore the invasion and lootings of the palace by miscreants and hoodlums, carting away of the staff of office and other items of value, desecration of the age-long customs of the people of Lagos is highly condemned by the association.

“The association therefore re–affirmed that it would guard against this despicable act creeping into the traditional institution of Lagos, as it is an aberration which must not be allowed to repeat itself.”

“The titled chiefs condemned the effrontery of the invaders and pledged its unwavering commitment to the sanctity of the Lagos Monarchy, its traditions and culture.”

While pledging its total support and allegiance to the Oba of Lagos, Gasper who is also the Are Onimo Edo of Lagos, called on relevant law enforcement agencies to fish out the perpetrators of this act and apply appropriate consequences.

Meanwhile, the Forum of Eko Princes and Princesses has also condemned in very strong terms the attack, desecration and of IGA IDUNGANRAN, the Palace of the Oba of Lagos by hoodlums and criminal elements masquerading as aggrieved “ ENDSARS” protesters.

The group, in a statement issued yesterday by Prince Adewale Okora, noted that the ancient Palace, originally built in 1670, has remained an historical monument and a cultural rallying point for the state.

“Reviewing the damming footage of the violent invasion by these miscreants and vandals, it is disheartening to observe the wanton desecration of our traditional heritage in Lagos. We totally condemn this attack and demand that it ceases immediately and urge the security services to secure the Palace. We commiserate with our Royal father Alaiyeluwa Oba Rilwan Babatunde Osuolale Aremu Akiolu, Akiolu I and call on the Lagos State Government to investigate this incident and bring the perpetrators of this dastardly act to book”.