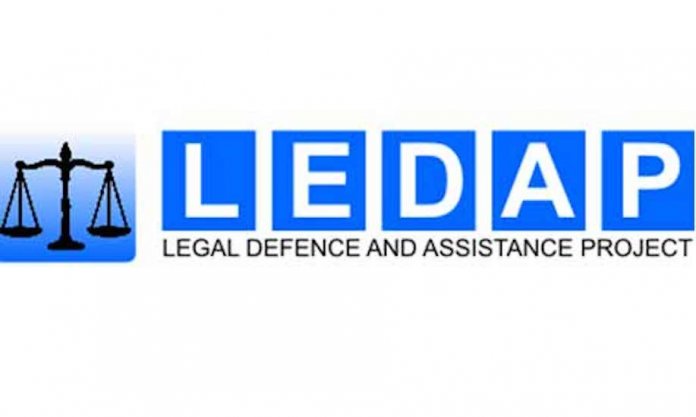 The Legal Defence and Assistance Project (LEDAP) in commemoration of the 18th World Day against Death Penalty, organised a webinar themed: “Access to Counsel; A matter of life or death”. This webinar was organised in conjunction with relevant stakeholders in the abolition of the death penalty movement in Nigeria to wit: The National Human Rights Commission, Amnesty International, Avocats Sans Frontieres and Lawyers Alert, amongst others.

The webinar kicked off with a brief introduction on the theme of the webinar by Mr. Chino Obiagwu, SAN who highlighted that by a survey conducted by LEDAP in 2016, it was discovered that over 33% of initial convictions in capital offences were upturned at the Supreme Court.

Mr. Tony Ojukwu who gave the keynote address at the webinar, highlighted that the issue of effective legal representation is the pillar of fair-hearing which is an important human right. He stated that the Constitution of the Federal Republic of Nigeria upholds the sanctity of human life, whilst admitting to the constitutionality of the death sentence in Nigeria. He further stated that, without effective representation, there won’t be fair trial which may eventually lead to wrongful conviction. Thus, the Supreme Court in Udofia v The State held that, in capital trials, counsel must realise that it is a matter of life and death, and counsel must assist the court to do justice.

Mr. Rommy Mom, speaking on the “The Role of the legal profession in Advancing Acess to Justice Administration for Capital Offenders” at the webinar, said effective access to justice behooves on the actors in the sector, which are Lawyers (the Bar and Bench). Mr. Rommy in his presentation went further to state that, access to justice goes beyond legal representation, and extends to the way and manner the rights of the Defendants are upheld. Raising the point of mandatory legal representation of persons charged with capital offences and the fact that many of the Defendants do not pay for legal representation (as 80% cannot afford the services of private Lawyers), they are majorly not effectively represented.

Ms. Angela Uwandu, speaking on “Advocacy and Engagement Strategies for Abolition of Death Penalty in Nigeria: Need for Collective Actions” said during her address, that in advocacy it is important for abolition activists to work together. Speaking further Ms. Angela opined that Nigerian legislation need review on the issue of the death penalty, as it does not serve as a deterrent to the commission of crime.

Part of the strategy in abolition of death penalty, is to set short-term goals and have a long-term plan.

The short term goal is to stop the expansion of the scope of death penalty in Nigeria, by engaging both the Executive and the Legislative arm of Government, as more laws have been passed in recent times that promote the death penalty, for instance, the law against kidnapping which has recently been adopted and passed in many Eastern States. She added that, part of the short-term goals can be challenging the mandatory nature of the death penalty in Nigeria.

Mr. Chino Obiagwu, SAN, speaking on “Challenges hindering access to Counsel and Justice for persons charged with Capital Offences and Possible Solutions” said the theme for this year’s World Day against Death Penalty is very instructive, and the challenges hindering access to counsel is centred on the absence of an attentive and readily available scheme. The Learned Silk further stated in his presentation, that one of the solutions to lack of effective representation, is to increase the funding for Legal Aid Council so that more senior Lawyers can be employed, adding that the NBA should also encourage Lawyers to take up pro bono cases. Concluding his presentation, Mr. Obiagwu advocated for the domestication and implementation of ACJA.

Ms. Osai Ojigbo, speaking on “Analysing the Recent Trends in the Increased Patterns of Capital Punishment: Does Capital Punishment serve as a Deterrent for Crimes in Nigeria?” at the webinar, said the Death Penalty is the most cruel, inhumane and degrading punishment. Over 100 countries have abolished death penalty, since the campaign for death penalty was embarked on by Amnesty International. She stated further that, the death penalty does not deter crime, as crimes in Nigeria are increasing. Death Penalty is discriminatory, as it only comes on the indigent. She added that the following steps must be taken to reduce crimes in the society: