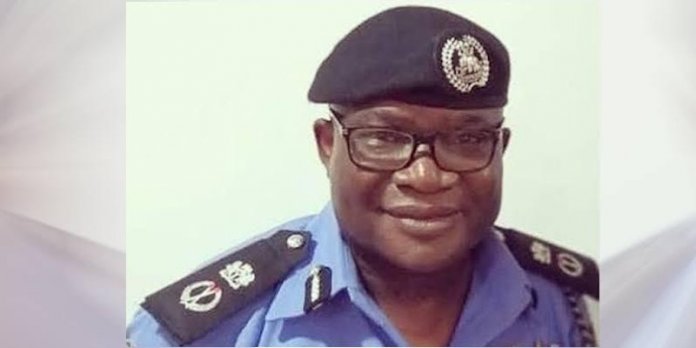 Luck recently ran out of a couple who dug out a corpse from a grave for ritualistic purposes following their arrest by the Ogun State Police Command.

The couple in company of other suspected ritualists, namely Niyi and Remilekun Folorunso, Muyideen Tolubi and, Sonubi Taiwo were arrested for unlawful possession of human skull following an information received by the police in Odogbolu Division of the command.

The DPO of the division, CSP Afolabi Yusuf, who led some detectives to the scene, confirmed the report and further added that the mutilated corpse belonged to none of the arrested suspects.

During interrogation, three of the suspects confessed that they dug the grave and removed the head of the corpse and thereafter led the police to where the fourth person who asked them to bring the head for ritual purpose was also apprehended.

Meanwhile, the Commissioner of Police, CP Edward Ajogun has ordered the immediate transfer of the suspects to the State Criminal Investigation and Intelligence Department (SCIID) for further investigation and prosecution.

In another development, eight members of the Black Axe cult group were recently arrested while mourning one of their members.

The arrest followed the timely report to the Ogijo Police Station of Ogun State by aggrieved persons as a result of the attack by the cultists on a 16-year-old boy, Onome Iduru, who was shot in the stomach by the cultists and dispossessed of his personal items like phone, during the funeral procession by the cultists in honour of their departed colleague.

The group further unleashed terror in the community, causing panic and mayhem in the society.

The injured victim were taken the hospital for medical treatment and peace has since been restored to the affected community.

Meanwhile, the CP, who ordered the transfer of the suspects to SCIID for further investigation,

warned against any group or individual engaging in activities capable of undermining the peace of the state while appealing to parents and guardians to warn their children and wards not to be part of any unlawful society as the results may be catastrophic.

In another development, the operatives of Ogun State Police Command have arrested two members of a kidnap syndicate who attempted to abduct 25-year-old Mariam Fagbohun and murdered her 50 years old mother in the process.

Fagbohun, who runs a provision store and a beer parlour was abducted by a six-man kidnapping gang in Ijoun, in YewaNorth Local Government on August 21, 2020 when she closed from her shop and was home bound.

In the process of abducting her, she raised an alarm which attracted people around, including the victim’s mother, Annah Fagbohun.

While the people around were trying to chase the abductors with the aim of rescuing her, the kidnappers shot into their midst and the bullet hit the victim’s mother and she died on the spot.

Reacting to the incident, the DPO of Egua Police Division, CspKalejaiye Olarenwaju led his men to the scene and with the collaboration of members of the Community, rescued the victim and apprehended one member of the gang by name JimohFayemi a native of Omu-Odo in Ekiti State.

Following the arrest, the CP directed that the suspect be transferred to the anti-kidnapping section with a clear mandate that search other members of the gang and bring them to book.

The team embarked on a technical and intelligence based investigation which led to the arrest of another member of the gang in Ekiti State, James Arowolo, a 47-year-old native of Obo-Ayegunle in Kwara State.

On interrogation, the duo confessed to have been contracted by one man simply known as “Ade” and his friend known as ‘Doctor’ who live in the same neighborhood with the victim to come and swindle her of a huge sum of money.

But having realised that the woman will not fall into their trap, they decided to kidnap her and demand for ransom.

Recovered from them were three single barrel guns, 12live cartridges and face mask.